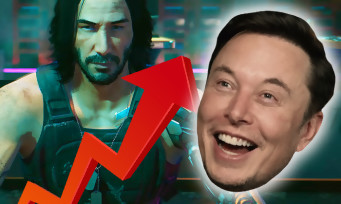 To say that Elon Musk has influence is a no-brainer. The businessman behind SpaceX and Tesla is an inveterate video game player, we already knew it and the latter seems to have started playing Cyberpunk 2077. If the title of CD Projekt Red is generally talked about for its many controversies , it is now defended by the second largest fortune in the world at present (behind Jeff Bezos, the boss of Amazon). It is indeed on Twitter that Elon Musk wished to give his positive opinion on the game, by evoking to start the polished aesthetic of Cyberpunk 2077. “By the way, the aesthetics of Cyberpunk are incredible. The interior design is top notch. “. Elon Musk rebounded from the fact that models S and X of the next Tesla will integrate a console on board, as powerful as a PS5 and an Xbox Series X | S. If Elon Musk did not fail to gently mock Cyberpunk 2077 bugs, he nevertheless recalled that he is absolutely a fan of the game. Comments that had a direct impact on the stock market, and in particular on the price of the action of the studio CD Projekt Red, which blazed immediately. A sudden increase of 19% which reached 365 PNL (approximately € 80), but which was only ephemeral since a few hours later, the action went back to 305 PNL, or around € 67. Having said that, in a fairly hostile environment for CD Projekt Red, it can only do good.

The esthetics of Cyberpunk are incredible btw. The interior design is👌.