Zelda Skyward Sword HD test: a remaster unfortunately not up to the task

In a few months, The Legend of Zelda: Skyward Sword will celebrate its 10th anniversary. Arrived on Wii on November 18, 2011, Link’s special motion gaming adventures unfortunately did not fully convince at the time. Between the controversial character design, the far too frozen and indigestible combat system, the painful trips back and forth in Celesbourg and the under-exploited Celestial, one had the impression that Eiji Aonuma and his teams had lacked clairvoyance. Yet it is this episode that was selected for a remaster on Nintendo Switch, and at the same time to celebrate the 35 years of the Zelda saga. The first images and the trailers did not reassure the assembly much about this restoration, which seemed light. After months of doubt, it is high time to check if the title has not just benefited from an “HD” filter, just to save money.

Nintendo is working on a balancing act by choosing to adapt The Legend of Zelda: Skyward Sword on Nintendo Switch. Thought in its time for the famous “motion gaming” of the Wii, the game had chosen to limit the controls to allow players to take the time to manage both the Wimmote and the Nunchuk. A heresy already at the time, and an additional complication for the development teams in 2021. So certainly, the purists who wish to approach the game with the original experience can still keep the controls of the time thanks to the gyroscopic functionalities of the Joys. -Con, but they will have to rub shoulders with this gameplay which already left something to be desired in 2011. By opting for this so special approach, the fights freeze and lose a lot in freedom, with this permanent and obligatory lock which makes the confrontations prohibitive. Slashing your sword while gesturing in front of your screen, it’s okay 10 minutes, but throughout the adventure, it’s quickly laborious, especially as the recognition of movements is far from as perfect as we are led to believe . And you will see that when it goes nuts, spending your time recalibrating the Joy-Con in the middle of a fight becomes extremely painful. On the other hand, on the Switch version, it is now possible to control the camera with the analog stick, something that was impossible in 2011, the Wiimote being devoid of a stick. It’s a detail said like that, but it allows to soften the gameplay, which is already well enclosed.

Despite everything, aware that Wii gameplay had already divided players in its time, Nintendo therefore had the good intelligence to offer more classic gameplay, without motion gaming, but that will not entirely solve our problems. Well no, because that’s where the great difficulty lies, namely to disguise a gameplay based on fiery gestures in front of your screen, by transposing them with basic controls. On paper, once motion gaming is disabled, all of the controls are assigned to the buttons, while the motion recognition is now placed at the analog stick. Basically, to type with your sword, you just need to give a direction with the stick and it also works with other items such as the lasso, the butterfly net and even the throwing bombs. On the other hand, where the shoe pinch is that once the attacks are assigned to the stick, it is no longer possible to control the camera with the latter. Nintendo has however found a little trick: you have to hold down the L button and then play with the stick. It is frankly not intuitive and in a somewhat tense confrontation, we even get tangled up the brushes. Worse, to switch an item, you must systematically put it away by pressing the B key, then start over with the basic handling. We don’t tell you how the whole thing slows down the experience and even becomes cumbersome when it is worth being lively and efficient. Where the developers could have been clever, it is by using the touch screen of the Nintendo Switch, an option valid for all types of Switch consoles, and which could have softened this wobbly gameplay a little more. Because yes, you have understood it, if by misfortune, you play on Nintendo Switch Lite, you will unfortunately have no choice, the Joy-Con not being detachable … 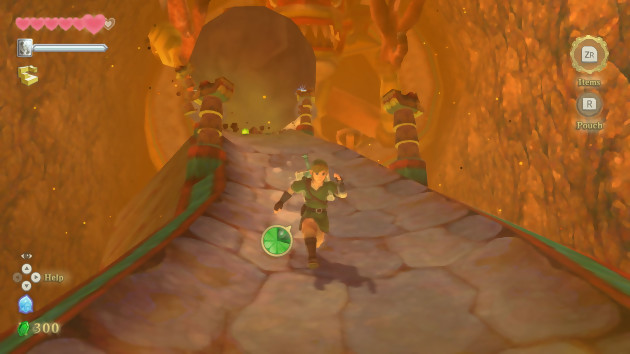 If the gameplay has not improved much by switching to Nintendo Switch, The Legend of Zelda: Skyward Sword HD could have made up for it in terms of its technique. But the trailers were unfortunately not misleading, the differences between the original game from 2011 and this – barely – restored version of 2021 remain minor. Yes, this HD version turns out to be more easily digestible visually, but we start from so far that it’s difficult to be captivated. This is especially true since at the time, the Wii was already a technically outdated console, and the artistic direction of the game was not the most convincing either. If the Paul Cézanne style has its effect, with its pastel colors and its slightly abstract rendering, the character design swears quite a bit. You only have to meet Link’s gaze to wonder if he, too, has not given in to the sirens of plastic surgery. Protruding eyes and Nabila-style pimped mouth, there is plenty to ask questions. It is all the more curious that this offbeat rendering only swears on the characters of Link and Zelda, the other protagonists adapting rather well to this slightly anamorphic pencil stroke. The environments, already quite empty and cubic at the time, did not live well the 10 years of evolution of the video game. Complicated indeed in 2021 to accept that a ball can have geometric sides … We will not lie, the Zelda magic, unlike that experienced in Breath of the Wild, is not there and to this are added the Link’s robotic animations that spoil the experience even more. 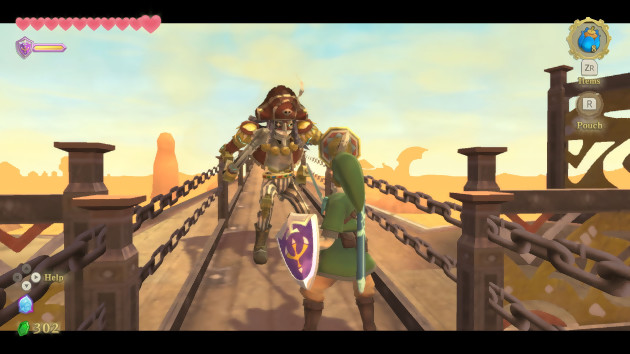 There are still some improvements in this Zelda: Skyward Sword HD, starting with a frame-rate that rotates at 60 frames per second. It is certainly the standard imposed today, but the title gains in fluidity and the adventure is more pleasant. Another element that makes the game more enjoyable, the optional help of Fay, since her interventions are now reduced to the essentials, knowing that it is possible to call on her manually. This makes it possible to no longer break the rhythm of the adventure as was the case in 2011. Still with the idea of ​​making the game more enjoyable, it is possible to speed up the dialogues and to skip the cutscenes with a simple pressing Button B. Likewise, the information windows no longer repeat and each explanation given about a collectible item only appears the first time the item is retrieved. Small appreciable readjustments of course, but which unfortunately do not save the game of its incessant back and forth in Celesbourg. We won’t go over the main flaws inherent in the original game, and we invite you to re-read our 2011 test, but clearly The Legend of Zelda: Skyward Sword HD is by far the most enjoyable episode of the game. saga, in spite of a rather appreciable scenario on the origins. You can’t talk to perfection every time, can you?