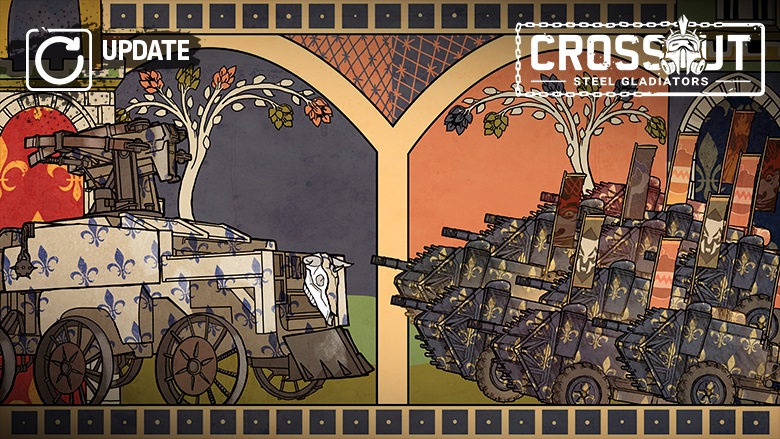 The long-awaited “mayhem” returns in an updated form: the same fierce battles, selection of roles and tactical tricks, but now in the medieval battles setting! Along with the event, you can also expect a new “Polar explorer” pack with a unique cabin and pulse weapon, as well as a redesigned system of markers and quick messages.

Attention! The event will last from April 29 to May 18 inclusive!

This year, the classic confrontation between two teams gets a new look!

Key features of the event: 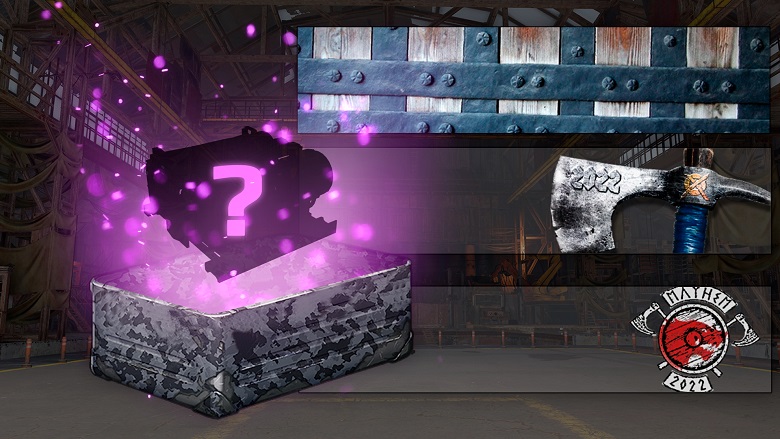 In addition, a special challenge for achieving 3 victories in the “Knight mayhem” brawl will be available to you daily. For completing this challenge, you will receive a special container with resources “Page’s chest”. When the container is opened, the reward is determined randomly.

Attention! The pack will be available from April 30 and until May 29 inclusive!

Dalis Rhyme, a meteorological scientist, who devoted his life to studying the north, was hardened not only by the cold. As a young man, by a twist of fate, he found himself in the far North. He fell in love with this region and decided to settle down to explore it. In a small fishing village Dalis found his future wife, and together they built a research station and raised their daughter. Even Crossout didn’t have much effect on their lives and didn’t disconnect them from science, forcing them only to be more concerned about provisions. But during one of their expeditions, Dalis and his wife ventured very far into the permafrost territory. They decided to spend the night in a cave at the foot of a giant mountain range, where they stumbled upon indescribable organic specimens that were unknown to science. After that, Dalis lost consciousness. He came to his senses in the middle of a snowy forest. Having returned home and not finding his wife and daughter there, the man went searching to the only place where he had seen people in recent years — the Valley.

Attention! The pack will be available from April 30!

Attention! The pack will be available from April 30 and until May 29 inclusive!

We have conducted a full evaluation of the performance of AI enemies in raids, and based on these results, we have made adjustments to the damage they deal. The changes affected most of the enemy armoured cars from all factions.

Some armoured cars were too efficient for a certain raid difficulty, others were too weak and didn’t reach the intended level of difficulty.

If any enemy in raids appears to be too powerful or extremely weak, please let us know and attach a screenshot so that we can quickly identify the armoured car, check it and implement additional changes. Thank you!

Comment: at the moment, “Borer” shows excessive effectiveness in battles at 4000 – 5000 PS range. Reducing the durability will make it easier to counter-play this weapon and give you more opportunities to destroy it before colliding with enemies.

Comment: we’re slightly reducing the shotgun’s damage to bring its excessive effectiveness back to normal within 5000 – 6000 PS frames.

The module’s effectiveness when combined with shotguns has been reduced.

Comment: This radiator is practically the only option for a powerful 4000 – 5000 PS build equipped with shotguns.

Bonus to cooldown speed increased from 50% to 60%.

Comment: along with the improvement of coolers, we are trying to diversify vehicle builds and make coolers a real alternative to radiators.

Comment: despite the fact that the machine gun was designed to be used at 4000 – 6000 PS, currently it’s not effective enough within those frames. We are slightly increasing its durability to improve the weapon’s survivability in combat.

Comment: like “Synthesis”, “Therm” is not powerful enough compared to other weapons of its level. A small increase in damage should improve the situation and increase their demand among the players.

Comment: the main problem with those invisibility modules is that they are too effective and not particularly demanding to player skill. Often the vehicle, being invisible, simply picks up the speed and rushes directly towards the enemy. Now, even while being in invisibility, the player needs to be more inventive.

Comment: at the moment, the radiator is too effective. This is especially noticeable at 5000 – 6000 PS and when using shotguns. That’s why we are implementing minor changes to its PS and reducing the module’s effectiveness when it’s used with shotguns.

Comment: we have taken into account your feedback about the lack of effectiveness of “Whirlwind”, and we are increasing the damage dealt by the autocannon.

Comment: changing the spread format will increase the convenience of using the nailgun, and the spread reduction will allow you to more effectively “disassemble” the enemy vehicle in close-range battles.

Comment: “Thunderbolt” is too effective at 8000 – 10000 PS level and clearly stands out from other epic weapons.

Comment: the situation with “Gremlin” is the opposite to the one with “Thunderbolt”. These changes will make it easier to use the weapon’s perk, and a slight increase in damage will improve the weapon’s effectiveness during moments when the perk cannot be used.

Comment: since “Bootstrap” has appeared in the game, one of the most frequent (besides questions about the non-standard model) questions we’ve been receiving concerned its excessive mass. We invite you to evaluate how a lightweight and durable generator will fit into your builds.

Comment: with these changes, we tried to take into account your feedback on how this weapon can be improved. We’re making it easier to use the weapon’s perk by increasing its blast radius, and the increased damage will be a nice bonus for those who use it.

Comment: this damage increase will improve the effectiveness of this rocket launcher.

Now, to activate the perk, the car must not take damage for 4 sec. (previously 10 sec.)

Comment: the previous version of this perk was quite difficult to use during fast-paced battles in the game.

Now the bonus from each charge is 4% (instead of 5% before).

Comment: we would like to balance the effectiveness of the wheel’s perk when it is used in conjunction with some weapons on 9000 – 10000 PS levels.

Comment: with the help of these changes, we would like to balance the cabin’s effectiveness in comparison to other cabins. We also want to increase its relevance at lower PS ranges, where the players usually use fewer epic boosters or boosters of other rarities.

Comment: a slightly decreased projectile flight speed will simplify the aiming at long ranges and will increase the cannon’s effectiveness.

Comment: this flamethrower is often used with the “Blight” and it’s currently too effective at high PS levels.

Comment: this change should slightly increase the survivability of the shotgun in close-range combat. The increase in damage will compensate for the changes in the parameters of radiators.

Comment: we have taken into account your comments that the shotgun is not very useful in battles, especially compared to other legendary weapons.

Comment: similar to “Borer”, these changes are meant to simplify the counter-play against this weapon before colliding with an enemy. Before these changes, “Harvester” was extremely effective in high-level battles (13000 Power Score).

Comment: “Stillwind” and “Fortune” were not efficient enough compared to other legendary weapons. In both cases, many players believed that the increase in damage could fix the issue. We invite you to check out the changes for both weapons.

Comment: After all changes, the effectiveness of the shotgun has decreased too significantly. The increase in damage will compensate for the changes in the parameters of radiators and the “Cockpit” cabin.

The blast epicenter shifts according to the parts destroyed by bullet damage (implemented the part piercing mechanics, similar to “BC-17 Tsunami”)

Comment: the armor-piercing projectiles will help the players who use the cannon fight against the builds whose parts are mounted away from each other more effectively.

Comment: the shotgun was insufficiently effective and did not match its rarity. We will assess how these changes will affect its performance in combat and, if necessary, make additional tweaks.

The system of markers and quick messages has been redesigned: