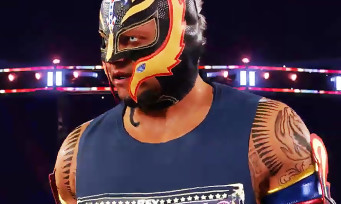 Could this be the start of the revolution for WWE 2K22? This is the question that deserves to be asked when we see how 2K Games and Visual Concepts are happy to share with us the list of new features and changes that will be made in January 2022 with the next big update. The developers had promised to straighten out the saga in decline for many years and prone to mockery as soon as we talk about its obsolete technique for more than 10 years. All this will probably be in the past in a few months, since we are promised fundamental improvements, with a change of graphics engine. Visual Concepts specifies that it has reused the NBA 2K engine, and the new images announce a high-quality visual rendering, with modernized models and textures. But that’s not all, the studio has also redesigned the gameplay and the animation engine from scratch as they say so that each dive, kick-out and finisher are finally realistic. Likewise, new controls have been assigned so that the player can enjoy more controls, in order to match each situation. Moreover, we are promised a simplified handling. , WWE 2K22 is easy to pick up and play, while still allowing full expression in the ring.

A redesigned game engine: The biggest change in WWE 2K22 is the engine itself. Visual Concepts redesigned the gameplay and animation engine from the ground up to make every dive, kick-out, and finisher feel real, as if the players were set ringside at WrestleMania. Players can feel the difference as soon as they pick up the controller.

New commands: This year, the updated and incredibly intuitive control scheme is making a difference. Configured to give players more control over every move, in all situations, WWE 2K22 is easy to pick up and play, while still allowing full expression in the ring.

Stunning graphics: Quite simply, WWE 2K22 has the best graphics in the WWE 2K franchise. Scanning and animation is done using the same state-of-the-art processes as for Visual Concepts’ NBA 2K franchise and the team reworked the lighting and relaunched the game from scratch. 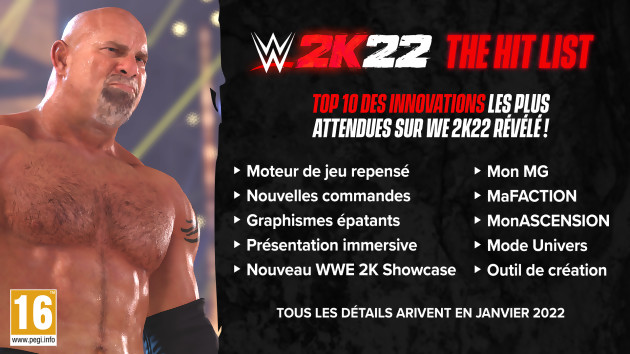 An immersive presentation: The most dynamic entry in the series to date will take players out of the crowd and into the ring, creating an authentic WWE feeling.

A new WWE 2K Showcase : Players can take a trip down memory lane and relive the most iconic matches and moments of legendary WWE Superstars.

My MG : Players will draft superstars, schedule games, manage contracts, and prove they’ve got what it takes to lead the top-performing brand in sports entertainment.

My FACTION : For the first time in the franchise, the all-new My FACTION mode allows players to build a legendary faction ready to compete with the iconic nWo. Players will be able to collect, manage, and upgrade Superstars, with weekly events and regular updates.

My ASCENSION : An opportunity for players to experience the journey of a WWE Superstar from the humble beginnings of a Rookie, evolution to a Superstar and thus being immortalized as a Legend. New scenarios will be available for both male and female MyPLAYERs.

Universe Mode : Universe Mode is back, giving players more control than ever over brands, PPVs, match results, rivalries and more.

Creation tool : The authoring tool is back and better than ever. Players can be themselves or someone / something entirely different, with all kinds of wild options and fancy elements, and then step into the ring anytime and anywhere in the world.