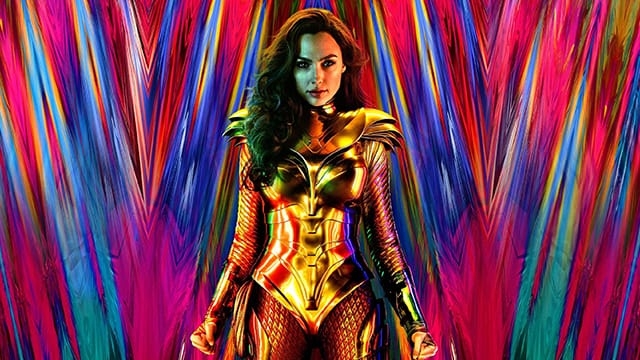 Gal Gadot reprises her role as the leading female superhero from the DC universe in Wonder Woman 1984. This time, returning director Patty Jenkins also takes on screenwriting duties with Geoff Johns and Dave Callaham, in a story she conceived with Johns. Through it, their love of the genre, and the 1980s, clearly comes through.

Diana Prince now works at the Smithsonian Institution in antiquities, leading an otherwise secluded life as she still suffers from the loss of Steve Trevor (Chris Pine). When new employee Barbara Minerva (Kristen Wiig) receives a shipment of stolen antiquities to catalog, Diana volunteers to help. Impressed with her new friend, Barbara wishes she could be just like her. Unknowingly, one of the artifacts grants that desire but is subsequently borrowed by smooth-talking con man Maxwell Lord (Pedro Pascal) with his own plans for the powerful artifact. Diana must stop them while coming to terms with both the fact that her own wish has been granted and that the wish brings consequences.

Jenkins, Johns, and Callaham are clearly familiar with everything the 1980s stood for: video games, aerobics, excess, and the hunger for more. This theme is woven throughout the story in a manner that is sometimes subtle, and at other times, it’s very much in the viewers’ faces. This may be the intent since that fits with the decade, but it also makes the tale somewhat predictable and very much a comic book brought to life. With previous entries, this has worked, but for Wonder Woman 1984, it occasionally falls flat.

Gadot is comfortable in her role by now, to the point that she is almost inseparable while playing the character. Pine is a joy as the revived Steve Trevor, gazing in childlike wonder at all the changes from his world nearly 70 years before. This, as much as anything, speaks of the excess throughout the film, and in a good way. Wiig is very two-dimensional as Barbara. This seems more an effect of the script than her performance, which meets the needs of a forgotten geek who wants more and suddenly discovers she has it. Pascal is the epitome of the 1980s real estate scheme con man, oozing into every room he enters as though sliding on the grease such men load their hair with. He plays it with all the charm of a disgraced televangelist.

The music in the film keeps the action moving and goes a long way to assist the CGI. It does so by distracting from a few moments when the effects are not up to the standard that fans expect. There are not many of these, and that makes them all the more obvious.

Wonder Woman 1984 is not as impressive as the first entry. It is flashy, loud, excessive, and very much a comic book, like the decade in which it takes place. But it is loads of fun, especially if you don’t mind a small step backward in quality for the good of both a social statement on excess and some closure so Diana can step forward.