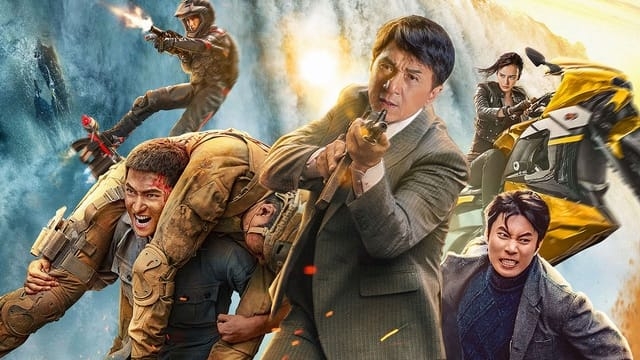 Vanguard is an action-comedy best defined as a Jackie Chan legacy film — it’s more impressive that he’s still making them than the movie itself. When the Vanguard agency is hired to protect an accountant and his daughter from a ruthless band of killers, they put their entire team at risk trying to get them back, along with one of their own.

Tang Huating (Jackie Chan) is the head of a London-based security firm called Vanguard. They’re tasked with high-end body guarding for wealthy, important people and their children. One such individual is an accountant who recently was involved with a deal gone South, with a notorious mercenary organization that was trying to purchase a weapon of mass destruction.

The evil organization kidnaps the man’s daughter Fareeda (Ruohan Xu) as leverage to get him to get their money back. These ruthless killers also kidnap Lei Zhenyu (Yang Yang) a handsome Vanguard agent. The Vanguard organization has a rule to never leave anyone behind – so they plan an incredibly dangerous rescue mission that will save Fareeda and Lei Zhenyu at the same time.

The monkey wrench is that the accountant that Vanguard is hired to protect turns himself in to the nefarious organization so that he can save his daughter’s life. He may lead them to where he’s stashed all the money they are after, which will directly fund some heinous villains. Will the well-trained Vanguard heroes be able to break into the compound to save the good guys, while punishing the bad?

Written and directed by Stanley Tong (Rumble in the Bronx, First Strike) Vanguard is an action film that works best when it isn’t taking itself seriously. The borderline racist or antiquated tropes include the Vanguard gang going to Africa with no specific country or location on the continent mentioned – then fighting random English-speaking Arab terrorists. What worked for his movies of the past is sometimes no longer socially acceptable or appropriate for a modern audience.

Additionally, Tong’s marvelous set pieces that formerly included Jackie Chan in the prime of his youth have been tailored to use mostly the younger, stunt-heavy stars. Chan’s ability at 66 years old to do any of the stunt work is phenomenal for his age, only paling in comparison to the decades of films he created in the prime of his youth. The charming, funny wit that he consistently brings to the screen is still there, though it also seems as though it’s growing older.

When present, the CGI is heavy-handed, sometimes detracting from the live work, rather than enhancing it. The set pieces are big, spanning a vast portion of the world and holding up some prime real estate in the film. There are plenty of fight scenes and a handful of laughs, though sometimes at the expense of Chan’s age.

Vanguard offers a mixed bag of throwback scenes for anyone who can ignore the social consciousness of the 1980’s, along with another film to add somewhere in the bottom/middle of the Jackie Chan library. Despite the lack of coherent plot, there is plenty of stuff going on from beginning to end, and there might be enough punches thrown and received to warrant a watch.