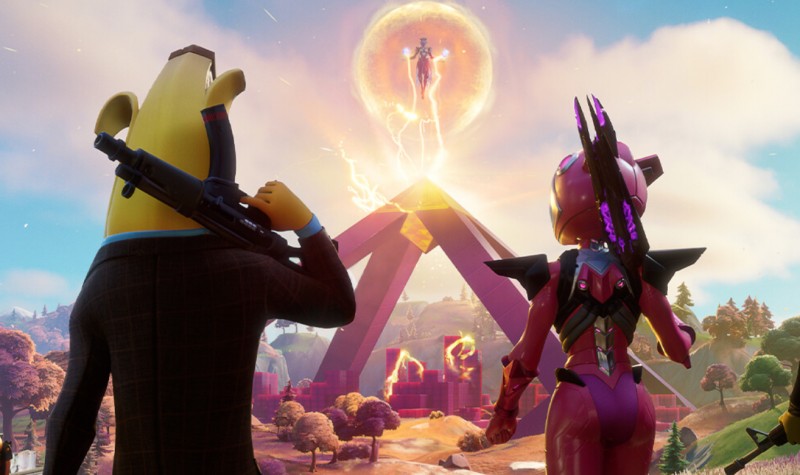 Update 12/4/21 4:00 p.m. Central: *SPOILERS AHEAD* Fortnite’s Chapter 2 finale titled “The End” has come and passed. Watch the video above to see the exciting climax featuring Jonesy and The Foundation. The island as we all know it has changed forever. Well, it’s still there, just flipped or rotated. In the meantime, we’re stranded in the ocean, left to await whatever adventures lie on the newly-inverted landmass, and what role The Foundation (now double confirmed to be Dwayne Johnson!) will play moving forward.

Original Story: Epic Games is ending Fortnite‘s second chapter sooner than expected. On December 4 at 4 p.m. ET, the Cube Queen is waging war against all of the combatants on the Island in a new limited event called “The End.”

This event is a one-time instance, meaning you won’t be able to play it again after you complete it. Epic recommends content creators and players record their playthrough as it will be the only way to see it again.

The End allows for groups of up to 16 players to queue together. Friends can get together 30 minutes before the event begins. This current season is ending a day earlier than Epic originally announced, so anyone who logs in now between December 4 will receive a 225,000 XP reward. Players who compete in The End event will earn a themed loading screen and wrap. From November 26 to 29, Epic is holding a power-leveling weekend with supercharged XP to help players complete the battle pass.

What comes next is anyone’s guess. Epic will likely continue on with Chapter 3 and a new theme. We know Boba Fett is coming to the game, and there are rumors that The Matrix will be involved as well.

What do you hope to see from Fortnite next? And what did you think of the current chapter? Let us know in the comments section below!