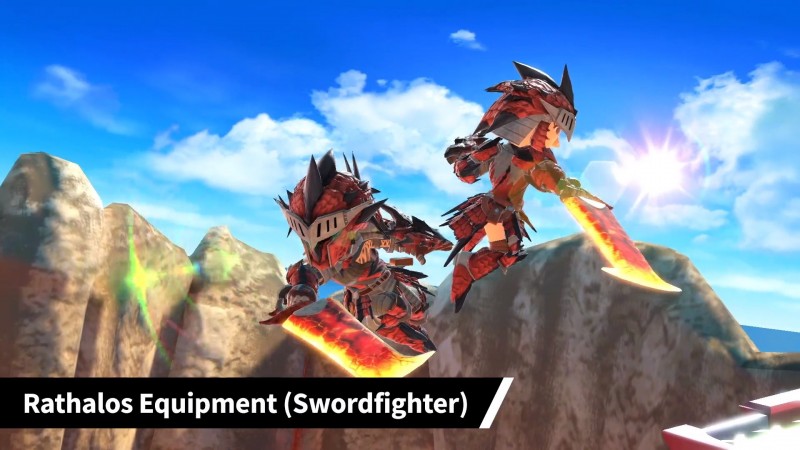 The latest fighter to join the Super Smash Bros. roster is available today with Pyra and her alternate form, Mythra. Game director Masahiro Sakurai showed off what the latest arrival brings to the fighting game, including a new stage and some more sprites for players to enjoy. Also revealed, outside of the Xenoblade focus, were the new Monster Hunter-inspired Mii costumes.

We’ve had some pretty cool Mii costumes in the past, even if previous revelations led to the disappointment that the actual characters themselves weren’t arriving (we’re still mourning the unofficial inclusion of Undertale), and the latest additions arrive ahead of Monster Hunter Rise.

In the latest Super Smash Bros. Ultimate showcase (at time marker 31:56), we see the different direction that Nintendo decided to take when introducing the newest Mii costumes, pivoting away from Xenoblade to celebrate Monster Hunter. The four newest costumes include:

Three of the four are specifically designed for swordfighter characters, but the Felyne hat can be donned by anyone playing Super Smash Bros. Ultimate. The director mentioned that the costumes are a part of celebrating the upcoming release of the latest Monster Hunter with Rise and that the Arthur swordfighter costume was a special homage to Ghosts ‘n Goblins following the success of the recently released Ghost ‘n Goblins Resurrection (you can read our full review of that right here).

Missed the full showcase? You can check out our previous coverage here to learn more about the newest fighter to join the fray later on today.

What do you think about the new Super Smash Bros. Ultimate Monster Hunter Mii costumes? Do you agree with one of the theories that this means we won’t be seeing an actual Monster Hunter character join as a full-on fighter? Sound off with your thoughts in the comment section below!