The spiritual sequel to 3DS Super Mario 3D Land, Super Mario 3D World was critically acclaimed when it was released in 2013. While sales have also been excellent compared to other Wii U games (second best-selling game) on the console after Mario Kart 8), in absolute terms they were still limited by the small installed base. That of the Switch being on the contrary extremely high, it is very logical that Nintendo wishes to give a second life to the game. And we will see that the Japanese publisher has put all the chances on his side, in particular thanks to a new high content. stolen.

As the name suggests and as the split launch menu confirms, Super Mario 3D World + Bowser’s Fury is actually two completely separate games. Let’s start at the beginning by studying the case of Super Mario 3D World, which asks us to release fairies captured by Bowser. Basically, nothing has really changed since the Wii U version and we therefore find with great pleasure various levels, to be covered in limited time. Always so ingenious, the level design multiplies the small refreshing finds and entertains us with efficiency during the big ten hours that the adventure lasts. The cat costume, which allows you to claw and climb walls, is making a comeback, naturally accompanied by other transformation objects, such as the double cherry which makes a clone of the character you control appear. The hero in question is to be chosen among Mario, Luigi, Peach and Toad, knowing that the way of jumping and the speed of movement differ slightly for each of them. The Red Cap Plumber is the most balanced, his brother jumps higher but takes longer to slow down, the Princess is slower than the others but can soar for a few seconds, while the Mushroom Boy is simply the fastest. Super Mario 3D World can just as easily be played solo, in which case you can choose the character you want for each level, as in multiplayer up to four. 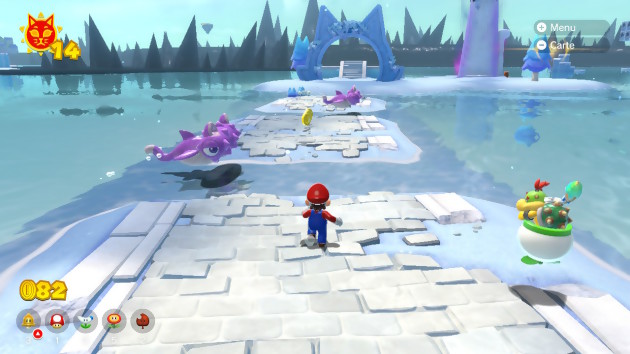 It is here that the Switch version begins to establish its superiority over its Wii U counterpart since it is now possible to play online and no longer only locally. Two players can even share the Joy-Con on a single console. More subtly, but at least as importantly, the movement speed of the various characters has been increased, while the cat costume allows you to climb a little higher. The gameplay becomes more dynamic and more enjoyable. The switch from the Wii U to the Switch is also accompanied by compatibility with amiibo (to obtain additional items), the possibility of triggering certain removable platforms thanks to a cursor controlled via the right Joy-Con (or ‘press directly on the screen if you’re playing on a laptop), and even a photo mode, which allows you to find a new use for the seals that you can pick up in the levels. In 2013, collecting them only allowed to decorate messages sent to the Miiverse. In 2021, we can stick the stamps “live” on the elements of the decor and make a nice souvenir photo. It’s gadget, but it’s smart. Finally, the game also benefits from purely technical improvements, since it runs in 720p at 60 frames per second in portable mode, and in 1080p 60fps in docked mode. We recommend this last mode without reservations. The miniature representations of the levels on the world map are cuter and more readable than ever, while during the action, one does not have to undergo horrible staircase effects on the big screen, as it is unfortunately too often. the case for Switch outputs. 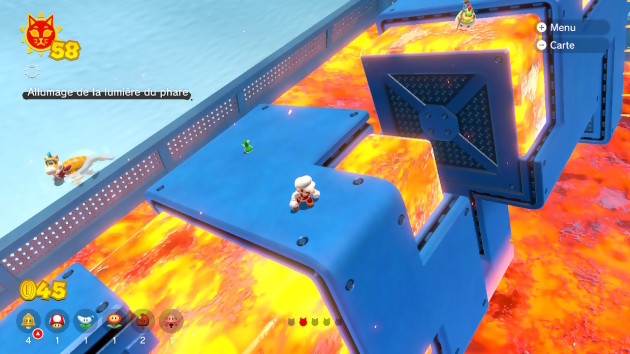 BOWSER JR. IS IN THE PLACE

Moreover, there is no need to look very far to realize it since the Bowser’s Fury segment turns in 720p in docked mode! This is obviously regrettable, but this is the only real criticism that can be made to this unprecedented adventure. Far from being a beast collection of additional levels thrown at players like a pinch of bread, this unexpected segment is a game in its own right, which takes place in a small open world made up of islets. Think of a mix between Super Mario 3D World and Super Mario Odyssey, and you’ll get a good feel for the gameplay and build of the title. Mario’s goal (this time, not the hero’s choice!) Is to collect not moons or stars, but the “feline stars” needed to relight headlights. Some of these stars are easy to spot, others are well hidden, and still others are broken into five pieces to find. It’s also possible to get some by catching up with a Rabbit here or an evil Luigi there, winning a race, finding a key to open a cage, beating a boss, etc.

To help him in all these tasks, Mario can count on Bowser Jr., who acts here as a friendly companion, as he asks for our help to bring his father back to his normal state. Little Koopa can possibly be controlled by another player, but it’s just as interesting to let the console run him. This makes it possible to modulate the difficulty of the game, since the choice is given between three levels of help: nothing at all, a little or a lot. This last option is to be reserved for the youngest because Bowser Jr. then collects a little too many coins and kills a little too many enemies on his own for a standard player. The movement controls allow him to point out areas marked with a question mark, which he can repaint to reveal a bonus item or a pipe leading to a secret room. It is even possible to send him to nab a feline star too difficult to access for the plumber. In addition, the latter can store up to five copies of each transformation object, and use them whenever he wants. Bell for the cat costume, mushroom to become a little bigger, flower-boomerang, flower of fire, and leaf for the raccoon costume thus answer the call. Do you find that too classic? If it is true that this Mario (like all the others one might be tempted to say) does not shine either by his scenario or by his risk-taking, he still has a surprise in store for us… of size! 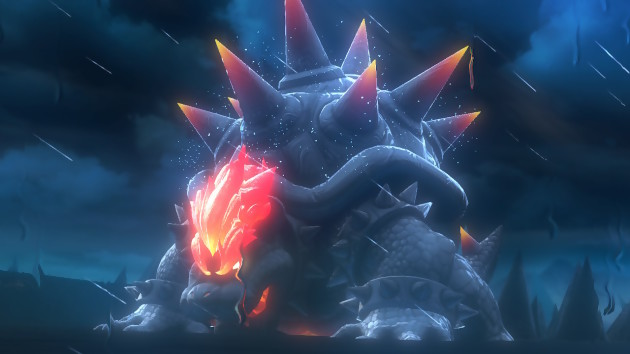 The concept of fury, which gives its name to the game, comes from the fact that we do not face a classic Bowser, but a super revered version of the King of the Koopas, who has become giant and uncontrollable due to a strange evil dark matter. , which also covers a good part of the ground. If this shelled Godzilla leaves us alone most of the time, he is still regularly seized with fits of fury that fall on us quite randomly. A storm is triggered, the atmosphere becomes dark, and Mario must continue his journey while avoiding the flaming projectiles that fall from the sky and taking shelter behind obstacles so as not to be grilled by the flaming breath of the demon. But to woe something is good! Bowser’s attacks make it possible to destroy certain special blocks, otherwise unbreakable and which naturally shelter feline stars. Which is good since the lights of the lighthouses calm the giant and send him back momentarily to his underwater den. Better yet, if we collect enough feline stars, it is possible to trigger a gigantic bell, capable of transforming Mario into Giga-Mario-Chat (just that!). The game then offers us a phase of duel where the two gigantic creatures face each other in the middle of settings that now seem tiny. 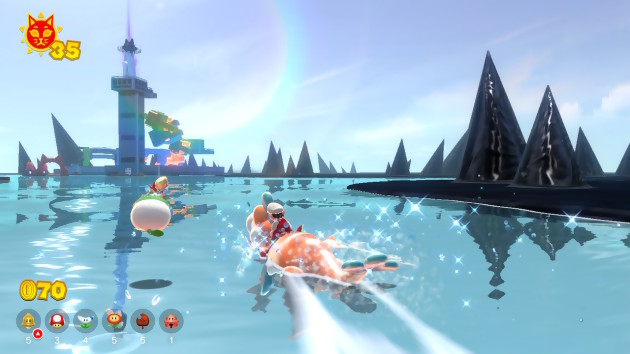 Very refreshing, the “Furious Bowser” sequences air an adventure whose level design also effectively adapts several ideas from Super Mario 3D World (transparent pipes, races on Plessie’s back, ice skating slides, etc.). To top it off, this Bowser Fury offers a lifespan far from ridiculous or negligible for new content. It is indeed necessary to recover fifty stars to succeed in defeating Bowser, which takes about five hours. But once the end credits rolled out, the game offers us to find fifty additional stars, just to extend the fun even more. In other words, if fifteen hours is enough to see the end of the two cumulative adventures, the followers of 100% will rather spend twenty-five to thirty hours! 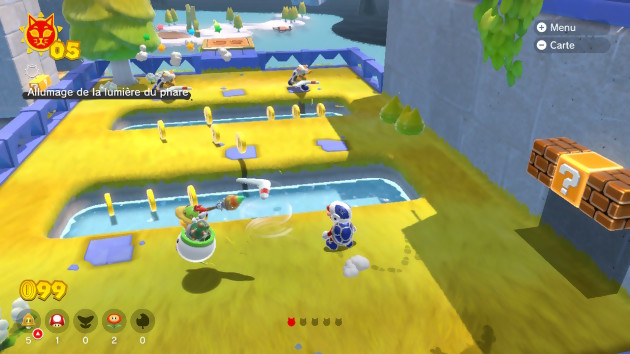