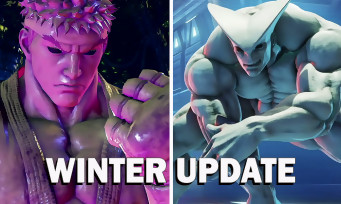 The teasing had started a few days ago: Capcom had made an appointment with the entire Street Fighter V community on this Thursday, February 11 in the early evening to discover the content of its Winter Update. A big update which was relayed live on Capcom’s Twitch channel (now available for replay on YouTube) and which allowed us to discover all the new features that will arrive over the weeks this year. The opportunity to first discover the character of Rose, which will arrive next spring and which is still being finalized within Capcom. Rose will of course land with her “Marina of Fortune” stage, taken from Street Fighter Alpha | Zero 2, an Italian setting with a large ship passing in the distance, the developers are particularly fond of.

Then, we were able to discover some of his attacks, performance capture images to support (very enriching) and which allow us to see how his Soul Bind will work, an anti-air that was first storyboarded before leaving. in filming then production. The rest of his attacks have also been detailed like the Soul Piede, Soul Breeze and Soul Spark which have their own peculiarities.As for the furies themselves, Rose calls on Soul Fortune for his V-Skill, which allows him to shoot a tarot card that can either increase his stats or weaken the opponent. The V2 of its V-Skill, called Soul Satellite, allows you to invoke up to two energy orbs that revolve around it to protect it on the one hand and attack on the other. There remains the Soul Dimension, which takes the place of the V-Trigger which allows Rose to teleport, while the V-Trigger 2 causes afterglow to appear which increases the damage of each hit.

Dan’s turn to go to the top with a presentation of his new costume, which will allow him to drop the top of his kimono, but also to wear a Tengu mask. With this look, Dan comes across as a perfect cross between a Geese Howard and a Mr Karate that no one had thought of. We had already had a lot of info on the character during the Tokyo Game Show online last September, this time we were able to discover his V-Skill 1 which grants him the possibility of canceling each of his special attacks, which not. only trolls the opponent but opens his combos. If Dan will be the perfect character to drive the opponent crazy, know that he can also activate his V-Trigger with a gauge willow, while his Haoh Gadoken (sweaty Ryo Sakazaki …) causes a wall bounce or a guard. crush if it is fully loaded. Dan will be the first of the Season 5 characters to land since it will be available from February 22.

Another important aspect of this Winter Update is the introduction of a new gameplay mechanic: V-Shift. It aims to strengthen the defensive side, provided you nibble a bar of V-Gauge. Once activated, this defensive system makes the character invulnerable to mugs, attacks and projectiles as well. It is therefore an opportunity to retaliate with openings of interesting combos. However, he will have to wait until February 22 to familiarize himself with this V-Shift which will obviously be free and should relaunch online battles. We imagine that Capcom has thought of rebalancing the whole game with the arrival of such a new feature.

As for the supposed new person that is Eleven, he is by no means a new fighter, but a character who takes on the appearance of an already existing fighter with a viscous and white coating, nothing more. Suffice to say that the disappointment was great at the time of Capcom’s confession. This “bonus” character will be accessible to all those who purchase the Season Pass. A real disappointment. However, we are finishing to confirm that this Season 5 begins on February 22, with the introduction of Dan. Let’s go.