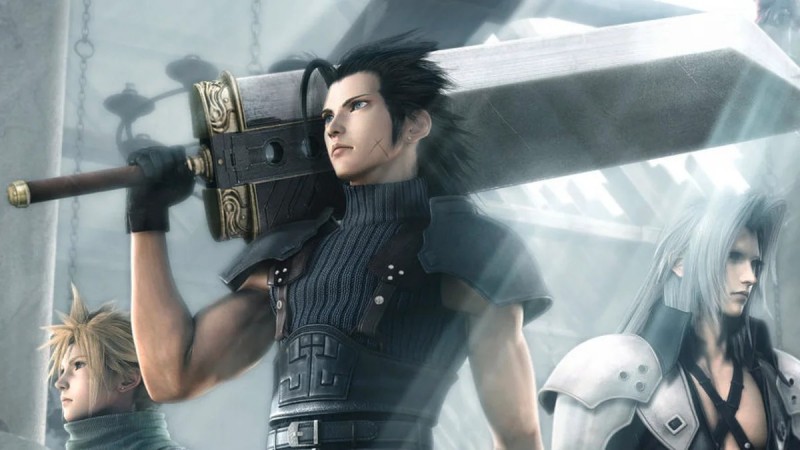 Square Enix has filed a few new Final Fantasy-related trademarks in Japan recently in preparation for the next entry of the Final Fantasy VII Remake. The included trademarks are Ever Crisis, the Shinra logo, and The First Soldier, and while that could mean anything, I know I’m not alone in hoping that Square Enix will give Crisis Core more of a spotlight.

The trademarks were first spotted by Gemetsu and features file names that Final Fantasy fans would expect, especially Shinra with its centrical role of VII’s narrative. Ever Crisis is where we get into Crisis Core territory, an incredible RPG prequel that came out on the PSP and the later mobile game Before Crisis: Final Fantasy VII that never made it over to the west. Each of the trademarks filed were filed at the end of December 2020.

For those that played the remake without having experienced the original or the attached companion stories with the PSP and mobile tales, Zach was a pivotal character in Crisis Core: Final Fantasy VII, which first made its debut back in 2007. This particular narrative acted as a prequel to the original Final Fantasy VII and was a part of a growing metaseries called Compilation of Final Fantasy VII.

Like Cloud, Zach was a SOLDIER who was assigned the task of locating the missing Genesis Rhapsodos, a fellow SOLDIER. In his quest to locate his query, Zach learns of Genesis’ origin and how Project G influenced Sephiroth and Angeal Hewley. The entire narrative was exceptionally vital when learning more about Sephiroth and who he truly is, and how he grew to be the powerful character we know today (or in my case, mindlessly obsess over).

Crisis Core was an incredible experience that really is paramount when understanding the bigger picture regarding what the Final Fantasy VII Remake truly gives fans. Does this trademark filing mean we’re getting another shot at experiencing Crisis Core? Despite thousands of fans asking for this exact thing, the probability is pretty low. Moreso when looking at the multiple parts that will make up the Remake and how each trademark files in with the episodic release. That being said, Zach made an interesting appearance at the end of Part I, so honestly? Square Enix is poised to do whatever they heck they want with this property should they choose.

Would you want to see a Crisis Core remake? What are you the most excited for when it comes to the next part of the Final Fantasy VII Remake? Sound off with your thoughts in the comment section below!