Returnal test (PS5): there is no pleasure without some pain

As component shortages continue to hit the gaming world and prevent everyone from properly finding a PS5 on the shelves, Sony Interactive Entertainment continues to deliver. After an All-Stars Destruction frankly not memorable and while waiting for the very impressive Ratchet & Clank Rift Apart, the Japanese publisher / manufacturer invites us to discover Returnal, a game whose rise in power has been gradual on the marketing side. Under its false air of SF blockbusters which plays on the theme of the time loop, it is above all a Rogue-lite developed by the studio Housemarque, until now accustomed to the indie productions in question. But it’s time for Finnish society to step back into the big leagues, and rub shoulders with the ruthless world of AAA. Be careful though, Returnal is not for everyone. Explanations. 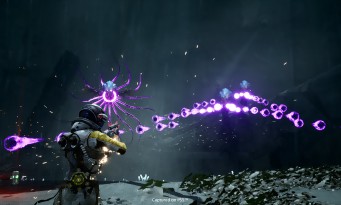 This is something that we already know, but it is sometimes fashionable to remember it: knowing how to sell a product is not given to everyone, especially when it is aimed at a specific audience, at moreover, a niche of hardcore players. But for Sony Interactive Entertainment’s marketing teams, that’s obviously not a problem. How to make Returnal, a Rogue-lite with a core-gamer approach, a game that could interest the general public? For Sony, it was obvious that there were two strong aspects to the game: its history and the fact that it was a third-person action game. With its sci-fi approach reminiscent of films like Prometheus and its scenario based on a time loop, the angle of approach to attract the general public was found. By wrapping it all in strong action sequences, mixed with imposing creatures as bosses, it did not take more to gain the attention of the whole world. Be careful, we are not here to say that Sony lied about the merchandise, but these arguments highlighted throughout the communication campaign are actually only a small part of what ultimately represents Returnal. The latter is above all the latest addition to the Housemarque laboratories, which has undoubtedly just provided us with a summary of their know-how for the 26 years that the studio has existed. If Sony Interactive Entertainment has relied heavily on the story and the backstory of Selene – the main character – during the last trailers, we must not lose sight of the fact that Returnal is the new production of Housemarque. Specializing in arcade games, more precisely Shoot’em up and Run & Gun (Resogun, Alienation, New Machina, Materfall), the studio has forged a great reputation on the indie scene. 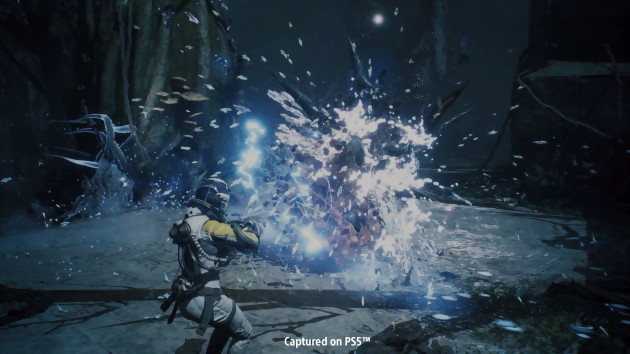 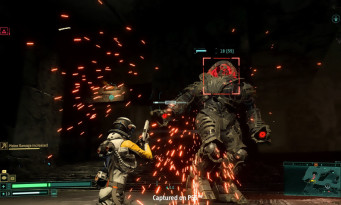 Make no mistake: Returnal is first and foremost a rogue-lite, in all that it means; which means that it is a game in which you will die (a lot), get angry (often) and be discouraged (all the time), since the game also allows itself to keep one of the inherent codes of the genre: the almost total loss of its arsenal and equipment. Worse still, with each game over, you will restart the adventure from square one, just as Selena wakes from her sleep after the crash of her ship on the soil of the planet Astropos. Said like that, it’s quite repulsive as a game, especially in 2021 where the player is used to being taken over, automatic saves helping. If the video game has become more democratic and players have become more fragile, let’s not forget that this difficulty, at first glance insurmountable, is part of a genre appreciated by millions. Evidenced by the success of the Dark Souls series and all the games that resemble it. However, in order not to be too austere in the era where the assistance becomes too insistent limit, the studio Housemarque had the good idea to appeal to the procedural generation of its levels. In decoded French, this means that each time you start from zero, and from the starting point of the map, you will never find the same level once you have passed the first portal. It’s both pleasant and unsettling, because you not only have to find your marks, but also your location. However, Returnal is not a true Snape-lite like other representatives of the genre, Hades to name a few. In order to stand out from the crowd, the title of Housemarque allows itself to use shortcuts to facilitate progression, and not to frustrate the player too much. Via this trick of randomly generated levels, it is therefore not necessary to go through all the levels again at each new cycle. Likewise, it is not mandatory to reshuffle all bosses after each Game Over. The same is true with certain types of equipment, which remain in Selene’s possession. That being said, that won’t stop Returnal from spinning your brain. 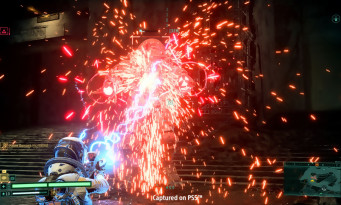 Scripturally, this return from scratch is justified by this time loop in which our astronaut seems stuck. Selene will ask herself a lot of questions, meet her corpse dozens and dozens of times, at specific times of the levels, but also meet this alien race, also decimated by a superior force. All this will therefore reinforce this desire to find as quickly as possible this “white shadow” which continues to be cited throughout the adventure. This plot, which turns out to be in the end in the background, is perhaps one of the weak points of the game, Housemarque not yet having the talent of the big studios to make the narration as fluid as expected. Despite everything, it is difficult not to be transported to this universe which seems to exceed Selene, and the player in its extension, Returnal drawing his inspiration from the side of the 7th Art and literature. Everything is grand, and grandiose. Each monument that we cross, each building that we explore gives rise to a feeling of gigantism. We are clearly bathed in Dark Science-Fiction, sometimes with Lovecraftian overtones, and for the general public, it is difficult not to see references to Alien and more precisely its prequel Prometheus. It is true that the game is dark, in its purpose and its environments, but we must advance in the adventure so that the sun rises a little more. 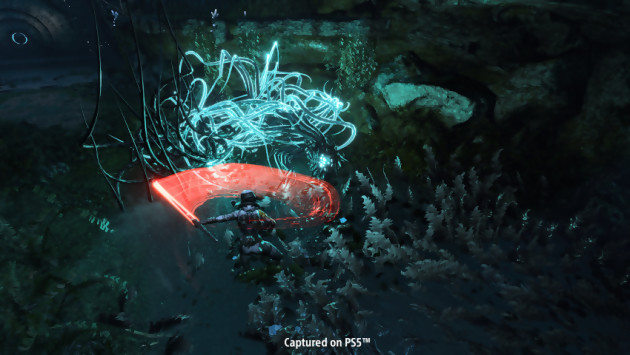 On the other hand, if there is one aspect on which Housemarque did not fail, it is on the gameplay side. With 26 years in the business, the Finnish developers know how to do it, especially with Returnal, they land with well-known shoot’em up mechanics that we will develop a little later. For now, it’s important to understand how the game works. In fact, if the features seem complex at the start, very quickly, we assimilate them quite quickly. Selene for example is able to carry a single weapon at a time (there are 10 in total), but each of them is scalable, knowing that there is a secondary fire each time. If finding and unlocking guns takes time the first few hours, very quickly, it is possible to switch weapons easily. The game makes chests available, not to mention that some enemies will leave their arsenal on the ground. But where Returnal is rather square, it is that each baffle has specific characteristics that push the player to vary his game as he progresses. If the notion of ammunition has been removed from Returnal’s gameplay, know that the latter is based on a reloading mechanism that forces the player to think before letting his finger press the trigger. Roughly speaking, as soon as the weapon is overheated, you have to wait several seconds before it cools down and is operational again. The player can then speed up the process by pressing at the right time. If the timing is respected, we can shoot again. If this is not the case, the weapon jams and you lose precious extra seconds, which can be tragic during a boss battle. This mechanic, taken from Gears of War, should please Cliff Bleszinki, one of the creators, who wondered why no other game had taken its ingenious idea of ​​gameplay. However, where the Epic Games TPS rewarded the player with more powerful balls if the timing was respected, Returnal unfortunately does not value the skill of the player. No bonus, nothing. Band of ungrateful will … 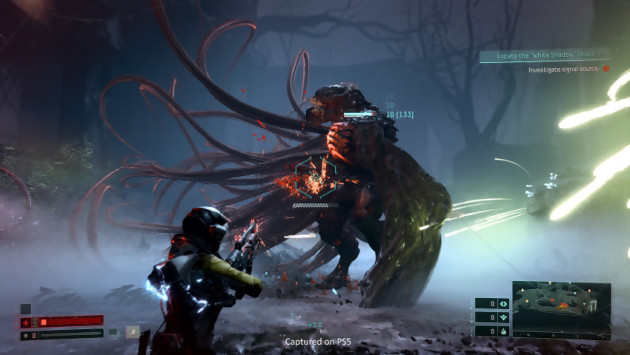 In fact, to get bonuses, you have to turn to the side of the adrenaline gauge that Selene has. In addition to his life bar, our astronaut has a second gauge which fills up according to the number of enemies killed. Once at its peak, the adrenaline gauge gives access to a higher strike force and even a protection bonus, knowing that it is possible to evolve the suit of our character thanks to parasites found here and there on Astropos (these can also cause malus at certain times of the game), but also through fabricators, very practical alien machines to continue improving Selen’s performance. However, to gain access to it, you will need to glean yellow obolites, or ether, another resource from this mystery planet. In short, you have understood it, Returnal is a game in which loot has a very important part, which means that exploration will be necessary to advance, and to understand the labyrinthine level design of the game. head, it will be necessary to be strong vis-a-vis the various enemies. Alone, regular creatures are not very fierce, but in groups they can become very complex to take down, as their shots become both more numerous and more complex to avoid. This is where Returnal recalls the passive of Housemarque, in love with shoot’em up, and his ballets of heavy shots that illuminate the dark sky of the planet Astropos. Returnal is a game where you should never stay static, and the dash button that allows Selene to move instantly also makes her invincible for a fraction of a second. It is also during clashes with the bosses that Returnal offers a spectacle worthy of the name, both visual and sensory. Thanks to the capabilities of DualSense, the player is constantly alerted to what is happening on the screen, via the localized vibrations of the controller. If in addition you have a good gaming headset in your possession, we suggest that you use the 3D Audio that accompanies the game for a complete and total immersion. 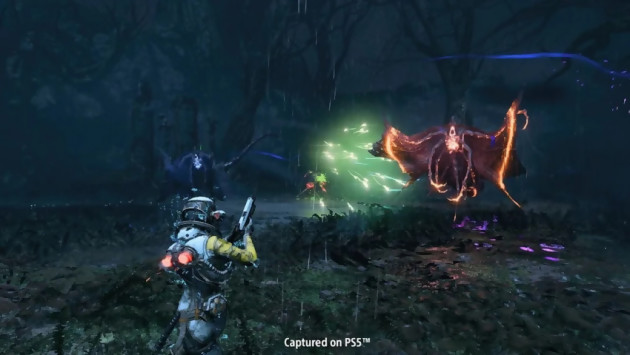 SUFFERING IS ALSO A FORM OF PLEASURE

If the show is largely at the rendezvous, Returnal can in no way be considered as a technological showcase for the PS5. Certainly, the game offers a very successful atmosphere and does not have to be ashamed against other shooters of the same caliber, and the latter could very well have been released on a PS4 Pro. So yes, some will tell me that the 60 frames per second remains constant, even during boss battles where the shooting particles flood the screen, but nothing that tells us that this is a next-gen game. At least, it is insufficient. Of course, we are aware that Housemarque does not have the financial means or the same work as a Naughty Dog, but the Finnish studio still manages to surprise us. Too bad, however, that the environments are partially destructible, we would have liked more interaction with the sets. One last word before we leave and the thorny question of lifespan. Quite frankly, for a game like Returnal, it is quite random to set a suitable scale, the whole functioning according to the skill of the player and his ability to find his way. And especially not to give up. But as the monk Henepola Gunaratana says so well, there is no pleasure without a certain pain. There is no pain without a certain pleasure.