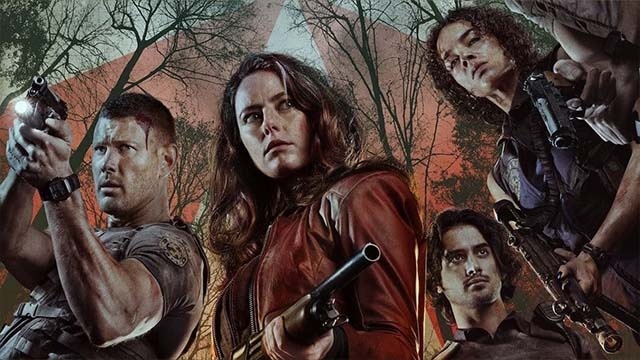 Racoon City is a rundown town that seems to be forgotten with time. Once a bustling city full of life and jobs, it becomes decimated once Umbrella Pharmaceuticals, the local corporation giant, decided to pack up and leave. Claire Redfield (Kaya Scodelario), a childhood resident of Racoon City, receives a tip that Umbrella may have been poisoning the population slowly over the years. Worried about her brother, Chris (Robbie Amell), Claire hitchhikes back to her hometown, only to slowly watch it unravel out of control. Meanwhile, Racoon City police officers, Jill Valentine (Hannah John-Kamen), Leon Kennedy (Avan Jogia), and Chris, assemble to investigate a couple missing policemen. Something doesn’t seem right in Racoon City, and it feels like Umbrella Corporation is behind the disturbance.

Roberts does a wonderful job bringing the beloved video game duo to life, highlighting some important landmarks in Racoon City, like the Police Department and the Spencer Mansion. The dark tone is consistent throughout, and each scene gives off a menacing reddish hue. The set design here is terrific, whether Claire is navigating the tight halls in the police station, or Chris is slowly making his way up the Mansion’s staircase, one can’t help but feel a slight nostalgia pop if they have ever played the early Resident Evil video games.

The main problem with the film lies within its acting, something that is constantly removing the audience from the experience, if only to remind them that they are, indeed, watching a movie. Choppy dialog, lack of chemistry, and just overall bad acting really do this love letter of a film a disservice. The plot seems to be a bit rushed as well. Roberts tries to jam in as much source material as he can, only to wind up with a scattered remnant of the original stories.

As a horror-action flick, audiences will surely be underwhelmed by Resident Evil: Welcome to Racoon City. This film is almost exclusively made for the fans of the franchise, and most of these viewers will not leave disappointed. Whether it is a subtle mention of an obscure character, or just the feeling of walking into the Spencer Mansion for the first time, this movie offers enough tidbits to keep fans excited. Only hampered by some acting and a fragmented plot, Welcome to Racoon City offers up a passable moviegoing experience.