Pigeon Simulator: a game where you play a pigeon with superpowers, 1st trailer WTF 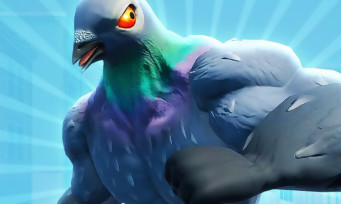 In the family of the most WTF games of the moment, here comes Pigeon Simulator, a game developed by the HakJak studio and published by tinyBuild for a date yet to be determined. In the meantime, we can already enjoy the first screenshots and the announcement trailer which plunge us into this cheeky atmosphere where the player will control a pigeon endowed with superpowers. Elected among the chosen of the race of the flying rats, the player will have to cause misery to mankind by mistreating them. It will be possible to steal their breakfast from their hands (a donut for example), to defecate on them (a classic), to make them twirl like in a wrestling ring, or better to catch them by the feet, to take the altitude and let go so that gravity does the rest. Described as a sandbox game where it will be possible to do anything and everything, this Pigeon Simulator is obviously reminiscent of a certain Goat Simulator and not only for its obsolete graphics. The title is distinguished, however, by the fact that the city will be generated randomly, with levels outside and others inside. The pigeon will have a weapon of skills to evolve over the missions, through a system based on DNA and the alchemy of the stomach. We can also customize your bird to give it a little more mouth. If he already has a Steam page, however, we do not know when the game will be released. Patience.