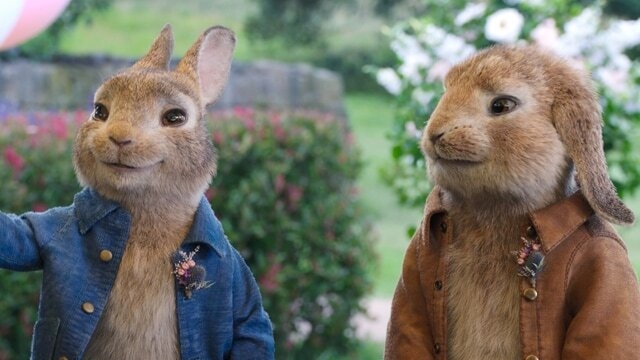 Peter Rabbit 2: The Runaway is a crass, snarky take on the beloved children’s classic book series by Beatrix Potter. Set shortly after the events of the first film, the humans who made friends with the rabbits, Bea and Thomas are now married, and she’s published a book about the adventures of Peter rabbit and his friends. But Peter has grown bored with a new, more sedentary life, and chooses to run off to the big city in search of adventure. Peter is faced with the struggle of trying not to be stereotyped as the rascally bunny character that he’s been written as in the book, especially since he may actually be that character deep down.

Bea (Rose Byrne) and Thomas (Domhnall Gleeson) live side by side with a number of forest animals in a very sweet, peaceful truce since everyone’s needs are being met. Adjusting to their new lives together, the humans are enjoying some success with Bea’s Peter Rabbit book that she’s published, while the forest critters are all too happy to share in the finer human things which are offered to them.

But Peter (James Corden) grows bored and wants to seek out some adventure. He decides that he wants to see what the big city has to offer him, since he’s only had a glimpse of what civilized human life is like, and he loves it. But he inadvertently becomes separated from his own family and finds himself making fast friends with a naughty bunch of animals led by Barnabas (Lennie James) who’s planning a farmer’s market heist.

Meanwhile, a big-wig movie mogul named Nigel Basil-Jones (David Oyelowo) has set his sights on turning Bea’s Peter Rabbit book into a blockbuster film. As they try to reject his ideas to drastically change her sweet story, Bea and Thomas realize they need to go after the real Peter because he may need their help.

When things go awry as the rescue team clashes with the heist, Peter realizes that he’s got some self-discovery to attend to. He’s faced with deciding what kind of bunny he wants to be – for better or for worse.
Adapted for the screen and directed by Will Gluck (Peter Rabbit, Annie) Peter Rabbit 2: The Runaway is filled with plenty of raucous humor, which is sometimes lovingly at its own expense. Fortunately, Gluck is in on the joke, and the cartoon sugar rush rabbits don’t take themselves too seriously, making this a ninety-minute snarkfest. The humans, however, are quite competently shown how to interact with their computer counterparts and it all makes for a very believable, if unbelievable, happy-go-lucky world.

While Peter Rabbit 2: The Runaway may not be high-brow by any stretch of the imagination, it is fairly meta in that it’s very self-aware of how silly it is. And the silliness is next-level big belly laughs for kids, with all the stunts played by CGI rabbits so we’re never really concerned with the slapstick. While most sequels try to ratchet everything up a few notches and expand the world, it actually works here so well that the sequel is as good or better than the first film, which is a rare achievement for a kids’ movie.

Filled with laughs and as much energy as the sugar rush rabbits can muster, Peter Rabbit 2: The Runaway is a fantastic sequel and a fine example of what can go right with a children’s film. Truly polished visuals combine with a spot-on voice cast and humans who are game for anything to create a surprisingly high-quality mélange of action, slapstick, and heart. Though the first installment was a lot of fun, the second may well be a runaway hit.