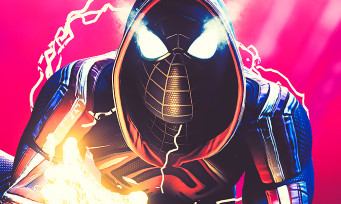 With over 20 million copies of Marvel’s Spider-Man sold on PS4, the title developed by Insomniac Games is one of Sony’s biggest hits in recent years. It is therefore quite logical, and even obvious, that a sequel is being developed on PS5, especially when we see the success of stand-alone on the latest console from the Japanese manufacturer. If nothing is official at the time of this writing, it could well be that one of the actors has made the dumpling to reveal the start of production of the game. Nadji Jeter, the comedian who plays Miles Morales in the games, who ignited the powder after posting a photo of himself in his performance outfit capture on his Instragam account. Snapshot which was deleted fairly quickly, but which was obviously taken up by all the Internet which kept a copy.

With Ratchet & Clank: Rift Apart now out, Insomniac Games studio can now fully focus on their new project, and the timing with this Marvel’s Spider-Man 2 seems to be perfect. It remains to be seen what the scenario of this sequel has in store for us. Will we be entitled to a sequel that still focuses on the character of Miles Morales, or will we be able to witness the return of Peter Parker, who had gone on vacation with Mary-Jane in the spin-off we remind you. Better, let’s hope that we can control the two protagonists in turn and even why not an episode which tries to go towards the Multiverse, since this is the direction taken by the MCU in Phase 4. The proposals are open.