Konami terminates PES license and renames it to eFootball, and becomes free-to-play 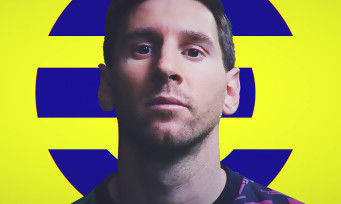 The transition was initiated last year and it is now complete and total for a few minutes, since Konami has formalized the end of the PES era. The one that was for years the main competitor of FIFA is radically changing its economic model to become a free-to-play game developed with the Unreal Engine. “New brand identity for a new generation of consoles and gamers, eFootball represents an innovative approach for the long-standing franchise, previously known as Pro Evolution Soccer and Winning Eleven.”, can we read in teaser in the press release published by Konami. eFootball, that’s its definitive name, will launch this fall on PC, PS5, Xbox Series X | S, PS4, Xbox One, iOS and Android as a free download. If the “FIFA / PES” war ended with the death of the Konami franchise, for the Japanese publisher, it is a question of thinking about the future and how to continue to feed its football game with the mode of consumption. current.

Like any self-respecting game-service, eFootball will offer new content regularly, to be up to date with the real changes in the clubs, but also to break away from the formula of one episode per year and therefore by changes. From now on, updates will be more frequent and take the form of seasons, without forgetting the small events here and there and all the cosmetic aspect that we can buy daily. If Konami has chosen the Unreal engine from Epic Games, it is also to make things easier and save economies of scale. Via this new one used by thousands of studios around the world, production will become more flexible and allow faster and easier adaptations from one platform to another. It is not by chance that Konami has formalized the arrival of cross-platform matchmaking with this eFootball. This is one of the big novelties, knowing that the game will also offer more variety in terms of animations (four times according to Konami), an extremely important element in a football game.

Note also that this year, Lionel Messi and Neymar Jr. have signed to be ambassadors for eFootball, while Andrés Iniesta and Gerard Piqué have been involved in the development of the game as official advisers, respectively for the offensive gameplay and for defensive gameplay.

Here is a start of the roadmap for this eFootball full of surprises:

Cross-platform matchmaking between consoles and PC (for example PlayStation®5 vs. Xbox Series X | S, PlayStation®5 vs. PC Steam®…)
A team building mode (name to be confirmed) which allows you to build your own team by acquiring players
An online Leagues mode (name to be confirmed) to have your team play in a competitive global league
A “Match Pass” system to earn items and players while playing eFootball

Compatibility with mobile controllers
Fully cross-platform matchmaking, including with the mobile version when using a compatible controller
Professional and amateur esports tournaments kick off 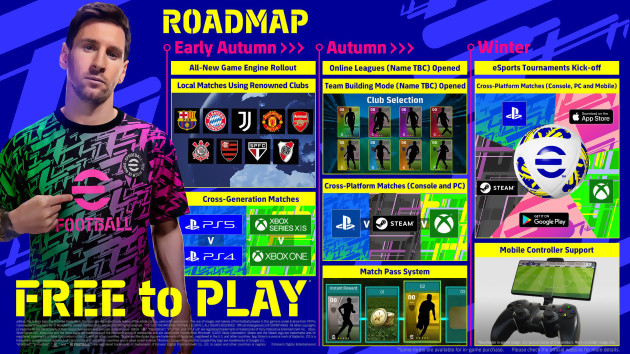