It Takes Two: we played two in coop ‘, it was colorful, fun and promising!

A former film director, Josef Fares is a video game maker unlike any other. Not only does the storyline occupy an important place in his works, but the man especially likes to emphasize the cooperation between two characters, that they are controlled by a single player (the excellent Brothers: A Tale of Two Sons ) or by two (the happy A Way Out with 3.5 million copies sold). It is therefore with four hands and two levers that we took advantage of the first hours of the imminent It Takes Two!

Let’s start with basic material considerations by specifying that even if you plan to play it online, and whatever your platform of choice (PC, PS4, PS5, Xbox One or Xbox Series X / S), you will not have to buy the game twice to browse it with a friend. This principle of a free “Friend Pass” already applied to A Way Out in the past is very welcome since cooperation is once again compulsory here. It is totally impossible to play solo, the whole adventure having been designed for two players. This time the two heroes are neither brothers nor companions in misfortune, but form a couple which is frankly struggling since divorce is the order of the day. However, through a screenplay sleight of hand involving their only daughter, Cody and May find themselves transformed into a little clay doll and a tiny wooden puppet, respectively. From then on, the couple will be forced to help each other and collaborate instead of tearing each other apart. The bubbly Dr. Hakim, which takes the form of a living, mustached marriage counseling book, will guide them down this path and teach them the basics of life as shrunken adventurers. 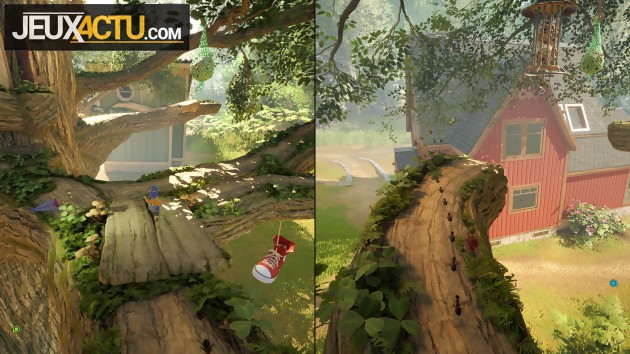 For players, the gameplay revolves mainly around a jump, a double jump, a push forward, a grappling hook, a shot and an interaction command with certain elements of the game. decor. It does not take more to have fun, because Josef Fares and the developers of Hazelight Studios know both how to stage their story and renew the situations enough so that the gameplay never seems redundant. This is in any case what we were able to observe during the first four hours of the adventure to which we had access. As far as bosses are concerned, this first contact with It Takes Two allowed us to face a vacuum cleaner, a toolbox, a beetle and a robotic wasp! Better yet, the game sometimes offers asymmetrical phases, which allow the two players to enjoy a slightly different gameplay, which should also ensure a certain replayability in the title. 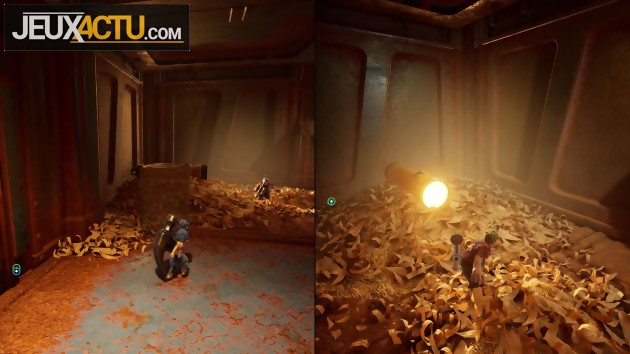 DARLING, I SHOULD HAVE PARENTS

Thus, one of the levels offers a nail thrower to Cody while May is entitled to a hammer. Later, the first will inherit a gun that propels combustible jelly, while the second will be able to throw matches to set off the explosions. Still later, Cody will have to steer a raft while May shoots enemies. And when the time comes to borrow a small plane crafted with the help of underpants, one of the players will steer the machine while the other will fight bare-handed with a squirrel on the main wing. The heart of the gameplay remains centered around small puzzles, which also often require the two players to act differently (one directs a pipe in which the other is propelled, one borrows platforms that the other is responsible for arranging correctly, etc.). The set regularly recalls the cooperative mode of Portal 2, even in the dirt that it is possible to do to his partner. Admit that it is tempting to let go of control of this or that mechanism so that our friend finds himself crushed by a wall or thrown into the void. Do not panic, the game is very permissive with regard to failure since the characters automatically rematerialize themselves a few moments after their death (a concept that the game has the intelligence to integrate into the scenario and to present during the event. ‘a cinematic scene).

It Takes Two does not hesitate to titillate our sense of rivalry, through competitive and optional mini-games regularly placed on our path (mole-slap where May has to crush Cody, aiming competition, tug of war above an abyss…). The developers seem to have clearly made a point of constantly surprising and entertaining players. The variety of situations should therefore be one of the major strengths of the game, which we also hope will have some scriptwriting surprises in store for us. It should be noted that apart from a few specific sequences the adventure always takes place in split screen, including when playing online. It’s a bit disturbing at first, but you get used to it quickly. As for the graphics, if they are not always state of the art, they benefit from a very efficient artistic direction, reminiscent of Pixar animated films.