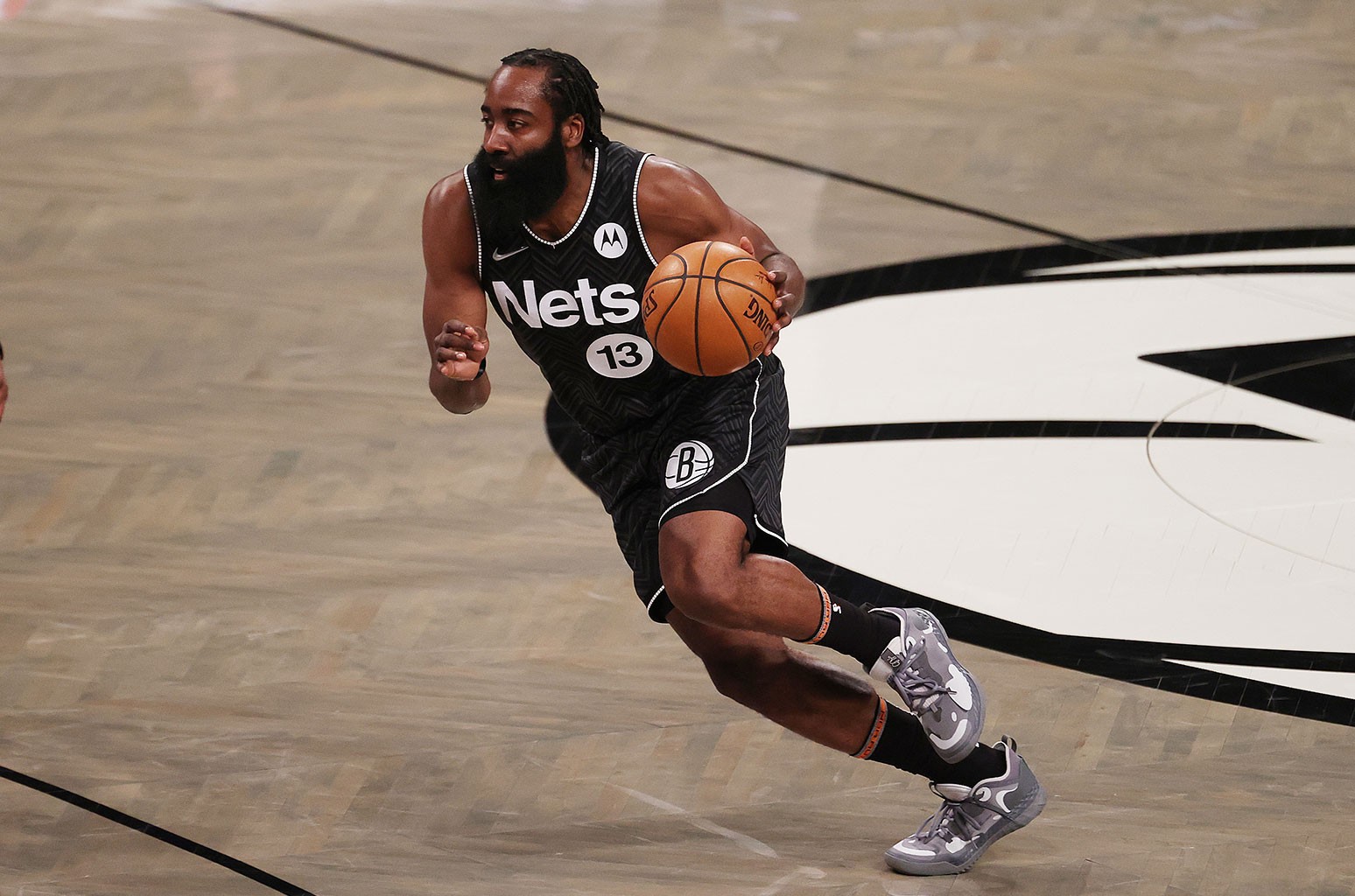 After ‘Battle Of The Platforms’ Lost $10 Million, Investors Including James Harden Are Jockeying for Their Money

A boxing event pitting YouTube creators against TikTok stars on June 12 called the Battle of the Platforms was supposed to usher in a new era of post-pandemic live entertainment, combining high-energy performances from DJ Khaled, Migos and Lil Baby with a headline fight between YouTuber Austin McBroom and TikToker Bryce Hall. Broadcast on livestream platform LiveXLive, organizers hoped to create a model for a new entertainment franchise, but instead the event lost at least $10 million, with investors, producers and 15 boxers still fighting to get paid.

Basketball superstar James Harden is one of those investors, Billboard has learned. The nine-time NBA all star, who now plays for the Brooklyn Nets, is one of the main investors in the Battle of the Platforms, which cost $20 million to produce, and sources say at least one other NBA player made an investment as well. Harden’s business manager declined to comment.

Harden’s investment was made through a Delaware LLC called Simply Greatness Productions. That company is owned by McBroom, 29, who defeated the 21-year-old Hall in the third round of the main event fight.

Despite the steep losses, LiveXLive chairman and chief executive Rob Ellin told shareholders on a June 28 earnings call that the much-hyped event was a success and would lead to new content ideas. As for the large losses, Ellin disclosed for the first time that despite being the only established brand promoting the fight, LiveXLive had no ownership stake in Battle of the Platforms and “no risk” in the event.

LiveXLive’s first foray into pay-per-view boxing follows a playbook established earlier this year by Triller Networks, owner of the video-sharing app Triller as well as the music battle series Verzuz, among others. In December, Triller jumped into boxing with Triller Fight Club, a $50-per-event pay-per-view fight night series in partnership with Snoop Dogg that was launched for the Nov. 28 exhibition fight between Mike Tyson and Roy Jones Jr. Since launching, Triller Fight Club has promoted to pay-per-view events at the Hulu Theater; Justin Bieber, The Black Keys, Doja Cat, Saweetie, Diplo and Major Lazer all played at the Triller’s second event on April 17.

Triller also has a $30-per-month subscription product called Triller Pass, which includes boxing, music events and the popular Verzuz series that it acquired from creators Swizz Beatz and Timbaland in March.

LiveXLive is hoping to grow its own standalone pay-per-view events, working with Monsta X, Pitbull, Nelly and jam bands Goose and Twiddle last year and producing Chicago Spring Awakening festival in October, which it acquired in 2020 from Axar Capital. While the ticket sales revenue wasn’t enough to make up for a $2 million year-over-year drop in subscription revenue and 20% drop in monthly active users for its streaming audio service, LiveXLive hopes to change that by increasing the number of pay-per-view events it works on. For the fiscal year ended March 31, 2021, LiveXLive reported $41 million in gross losses and has lost $169 million total since going public in 2017.

LiveXLive is now overseeing Battle of the Platforms’ $6.5 million to $10 million in revenue from pay-per-view sales and sponsorships, sources say. Lawyers for Harden, McBroom, Hall — who was promised a $5 million fee for participating in the fight — and others are trying to figure out how to get their clients paid from the sales generated by LiveXLive.

If the sides can’t agree, the dispute could end up either in bankruptcy or as part of a lawsuit. LiveXLive is currently embroiled in a dozen lawsuits and legal efforts to enforce court-ordered judgements won by lawyers, former ticketing clients and ex-employees.

Hall and McBroom each estimated the event would generate 1.7 million to 2.3 million pay-per-packages sold at $50 apiece. That would have made it the seventh- to fifth-highest pay-per-view event of all time and would have out-performed the highest-grossing social media event ever — the Logan Paul boxing match against British YouTube personality KSI, which sold 1.3 million pay-per-view packages priced at $10 apiece.

Instead, the Battle of the Platforms only sold 135,000 pay-per-view packages, falling short of the roughly 500,000 it would have needed to break even. Now the event’s stars are blaming LiveXLive for the loss, although reps for DJ Khaled and Lil Baby said they weren’t aware of any problems getting paid. Migos’ management did not respond to a request for comment.

McBroom has threatened legal action against LiveXLive and called for a forensic audit of the event’s pay-per-view numbers, asking fans to send copies of their receipts from pay-per-view packages sold on LiveXLive. McBroom also alleges that LiveXLive failed to stop piracy of the event on YouTube and alleged that hundreds of thousands of people watched the event for free via illegal feeds.

But several sources involved in the Battle of Platforms say it’s actually McBroom who’s at fault for the event’s lackluster sales and exploding costs, saying the 29-year-old approved a spiraling budget but didn’t put in the work to properly market the event. Prior to agreeing to work with LiveXLive, McBroom pitched the event to Live Nation and its streaming platform Veeps, but a deal was never reached.

Talent manager Michael Gruen with TalentX Entertainment confirmed to Billboard that he passed on having his clients, like TikTok stars Josh Richards and Griffin Johnson, be involved, because of the Battle of the Platforms’ high spending and lack of capital guaranteeing the fighters got paid.

Despite badly missing expectations, the $6.5 million in sales would have likely set a record for Veeps. Very few musical artists have broken 100,000 paid tickets sold for livestreams during the pandemic. (For example, Driift, one of the largest live-streaming concert companies during the coronavirus lockdown, had its biggest outing with One Direction singer Niall Horan, who generated $2.2 million from 126,163 tickets, priced an average of $17 per ticket.) And regardless of its failures, there’s reason for Ellin to feel bullish: Battle of the Platforms shows that fans are willing to pay more for creative events and promoters who can match the right influencers and artists into a compelling experience could find ways to bring in healthy paydays down the road, for them and other livestreaming companies. — Dave Brooks

Soundcloud rap duo $uicideboy$ and their independent label G*59 Records forged a “a strong eight-figure deal” with Sony’s The Orchard distributor earlier this year, sources tell Billboard. The deal underscores how much cult acts can pull in from streaming, without airplay, and the bets labels and distributors are placing on their future growth.

This marks a new chapter for the emo-rap centered indie label which was founded by the cousin duo behind $uicideboy$ — Ruby da Cherry and $crim. Known for their abrasive lyricism, including themes of satanism, anarchism and suicidal ideation, the pair first became popular on Soundcloud for their shock-rap style in 2014 around the release of their three track EP Kill Yourself Part I: The $uicide $aga. Named after the suicide pact the duo made should their music career not work out, $uicideboy$ became a fixture in underground hip-hop before breaking into the mainstream consciousness with their 2018 project I Want to Die In New Orleans, which peaked at No. 9 on the Billboard 200.

$uicideboy$’s catalog has logged 4.8 billion on-demand streams in the U.S., according to MRC Data, with 329,000 digital song downloads. In total, their albums have earned a combined 2.7 million equivalent album units and sold 93,000 copies in the U.S.

Talks of the new partnership between G*59 and The Orchard began late last year, sources tell Billboard, and news of the deal comes ahead of $uicideboy$’s next album, Long Term Effects of Suffering, due out Aug. 13. Prior to the agreement with The Orchard, G*59 Records was distributed by Virgin Music.

According to the duo’s manager, Dana Biondi, The Orchard partnership is “a super healthy deal” for the label, adding “it’s attributed to all the groundwork that we’ve put in over the last couple years, and [The Orchard’s] belief in us and our belief in ourselves to build G*59 into a huge record label.”

Beyond the new $uicideboy$ project, the team at G*59 hope to expand “both the $uicideboy$ and their artists worldwide,” and to take their music on the road, including sets at the upcoming Lollapalooza and Rolling Loud Miami festivals. “We’re in a really good spot,” Biondi says. “We’re starting to transcend into the wider net of music as a whole. We’re less pigeonholed, and we are getting the respect that $uicideboy$ deserves.” — Kristin Robinson