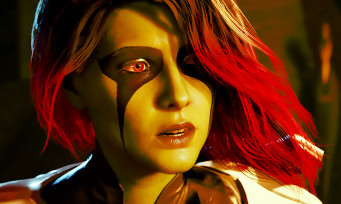 Wolverine, Spider-Man 2 and Guardians of the Galaxy, clearly Marvel was the star of this PlayStation Showcase of September 9, 2021. The title of Square Enix indeed wanted to unveil its history trailer, to remind us its narrative solo side, knowing that the approach will be more oriented towards the events of comic-books than those of the MCU films. You just have to see the look of the different characters, but also the choice of the villains who will come to face our group of superheroes such as Lady Hellbender and the Great Unifier Raker. As will the presence of Cosmo, the talkative dog cosmonaut, who will be there to help our Guardians of the Galaxy. In any case, the new trailer seems to indicate to us that it is the Universal Church of Truth which is singled out as being the objective to be defeated. On the other hand, the common point with the Marvel Cinematic Universe is the incessant humor of Peter Quill and this desire to offer 70’s music that will punctuate the adventure. The game’s release date is set for October 26 of this year on PC, PS4, PS5, Xbox One, Xbox Series X | S, and Switch.