Developed by the French studio Storybird, Golden Force is a small independent action / platform game that has nevertheless found the strength to appear on PC, PS4, Switch and Xbox One. We have looked at the Steam version released on April 22 and are ready to report back to you. On the menu: big pixels, pirates, gold doubloons, Salsa-flavored bosses, high difficulty, and a general atmosphere that brings us directly back to the era of the Super Nintendo and the Mega Drive. 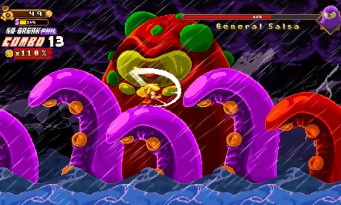 If we are to believe the few lines of text that serve as an introduction to the game, the Golden Force is a team of four mercenaries who have only one credo: always amass more gold. It is with this in mind that our anti-heroes leave for the Archipelago of Muscle, the forces of the Demon King standing in their way being only an obstacle to overcome and not a goal in itself. For once, we’re not here to save the world, but just to dig deep into it. Like its protagonists, the scenario and the staging go to the essential and do not offer us any frills. No dialogues or cutscenes to eat, only the gameplay counts. The universe still manages to exist in the eyes of players thanks to its atmosphere of piracy and a colorful artistic direction quite effective. Naturally the latter favors large pixels, which are also more or less enormous depending on the moment because the camera offers us some zooms and dezooms from time to time. We can not say that we really take full eyes, at least not in the “2021 / RTX” sense of the term, but the pixel art that is offered to us here is not lacking in charm and is always very readable. Some very gory effects are even in the game, since teeth, eyes, bones and sprays of blood do not hesitate to fly on the screen. The bosses who, who knows why, all bear the names of Tex-Mex culinary specialties (General Salsa, General Tacos, General Burritos, General Nacho and General Tortilla) are particularly pleasant. They occupy a very large part of the screen, benefit from a sophisticated design and offer well thought out attack patterns. The Demon King fulfills his role of final boss perfectly. 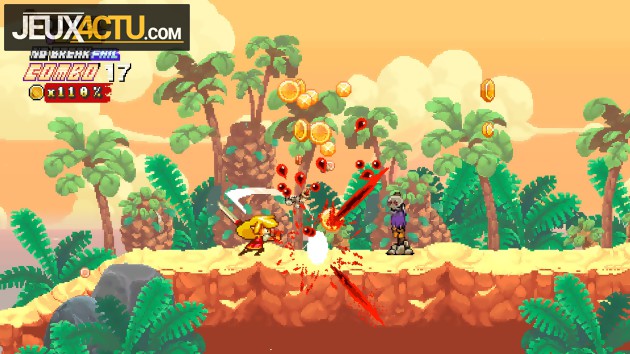 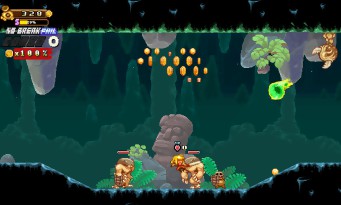 Between the bosses there are many paths to follow, since the Archipelago of Muscle is made up of four islands grouping together twenty-two levels. These multiply the hidden areas and branches, which we advise you to explore as much as possible, because this is the only way to lower the fairly high difficulty of the experience a little. The gold and gems that can be collected in these optional zones can indeed be spent later in a shop in order to acquire extremely useful objects, even essential (permanent additional life point, fairy who resuscitates us a times in case of death, temporary addition of fire or ice to attacks…). If we appreciate that the challenge is at the height of the games of yesteryear, we still regret that Golden Force does not offer several different difficulty levels, history that a more “fragile” audience can also enjoy the adventure. The gameplay requirement also comes from the developers’ desire to make us chain combos, knowing that the range of movements includes a jump, an attack, a charged attack, a slide, a dash and a super-power. The studio has even gone so far as to permanently display the status “no break” or “no break: fail” on the screen, just to motivate the most revered players not to interrupt their sequences once. 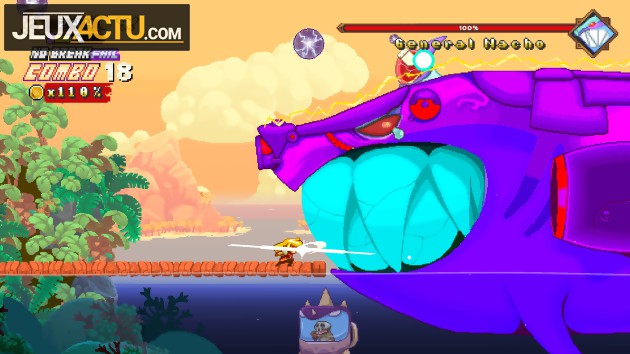 All this works quite well, and the game does not hesitate to vary the pleasures by offering us passages underwater, “travel” pipes, switches that change the orientation of the sets and other delicacies of the genre. The whole is very classic, and even too classic, some would say, but is generally quite pleasant. The level design is still relatively unfair from time to time, especially when it conceals a chasm out of view. But there is nothing to regret purchasing the game. The same goes for the two small bugs that we encountered. One concerns the display of on-screen controls, which persists in presenting the keyboard keys even though the player is using a controller, while the other forced us to restart a level, because our character refused. stubbornly climbing a rope. A little patch, gentlemen of Storybird Studio?