Elden Ring: 19 min of gameplay to get to know the open world and the spectral steed 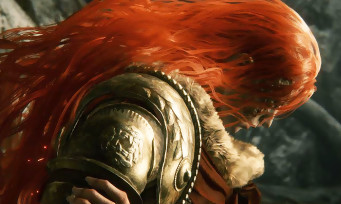 Bandai Namco Entertainment had announced it and the promise was kept: the gameplay of Elden Ring was finally unveiled to the general public through a video of more than 19 minutes. The opportunity to see that yes, the Dark Souls heritage is still present, but with an open world dimension that the developers are experiencing for the first time. It will not be entirely an open world, but large areas cut into several sections that can be explored on the back of a creature halfway between the horse and the bull, called the steed spectral. It will not be too much to fight some bosses like this flame-breathing dragon, able to tear everything off with a simple flick of the paw. This gameplay sequence also allows us to have a good overview of the map and points of interest that will punctuate the adventure. It will be possible to use a fast-travel system, but also dungeons that will have to be explored through caves, mines or catacombs, just to keep the dismal atmosphere of From Software productions.

In this regard, this Elden Ring borrows from all the games of the studio, whether Dark Souls for the character development system, but also Sekiro for his infiltration phases which will enrich the gameplay. But keep in mind that the game will focus above all on boss fights, tough and formidable and whose only point of interest is to make you bite the dust as many times as possible. From Software made it clear that the multiplayer mode will be there for friends to play in cooperation to eliminate as many enemies as possible. But rather than words, make way for the 19-minute video for a nice preview of what awaits us on February 25, 2022 on PC, PS5, PS4, Xbox Series and Xbox One.