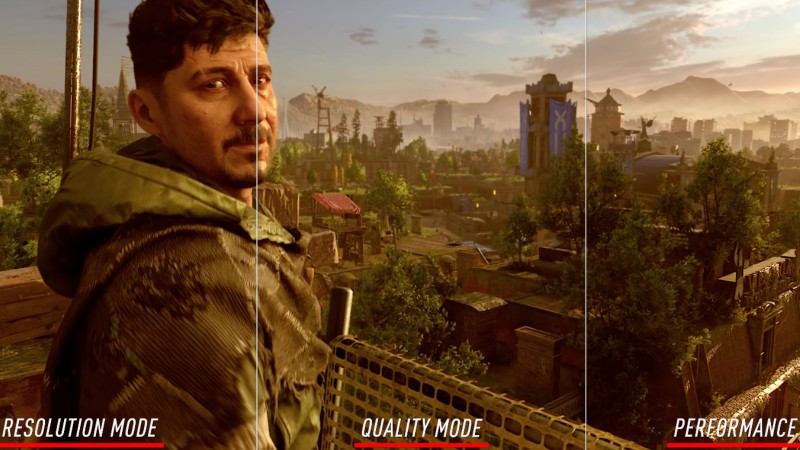 Techland has released a new trailer detailing the gameplay modes in the PlayStation 5 version of Dying Light 2 Stay Human.

As is usual for PS5 games as of late, there are three modes: performance, quality, and resolution. Each option gives players a different type of game presentation, but all three look great based on the trailer released today.

The Quality Mode with Ray Tracing, as it’s called, gives you exactly what you’d expect in that it’s a high-resolution mode that prioritizes Ray Tracing capabilities over performance. While there’s no official word, this mode looks 60 FPS to us, or at least higher than 30 FPS.

As the name implies, the Resolution mode maintains 4K visuals above all else. It’s the most visually stunning mode based on the trailer, and again, it doesn’t appear to be 30 FPS.  Although, without any official word, it very well could be. After all, this is just a trailer, and while it showcases gameplay, we won’t know how these modes perform until the game is in our hands.

Lastly, Performance mode is one we suspect a lot of players will be using in a first-person game all about parkour and action. The trailer describes it as “60+ FPS” so it seems like this mode prioritizes maintaining 60 FPS, with capabilities to reach even higher frames per second.

In other news, Techland has also announced that cross-platform and cross-generation console cooperative play in Dying Light 2 will not be available at launch on February 4. However, if you buy the PS4 or Xbox One version and wish to upgrade to their current-gen counterparts doing so will be free.

While waiting to learn more about these modes in Dying Light 2 Stay Human, read about the Dying Light 2 PC requirements and how the Switch version of Dying Light 2 has been delayed. Check out this story about how Dying Light 2’s main story lasts about 20 hours, although completing every single thing in the game will take you 500 hours.

Which mode of Dying Light 2 Stay Human will you be playing on PlayStation 5? Let us know in the comments below!