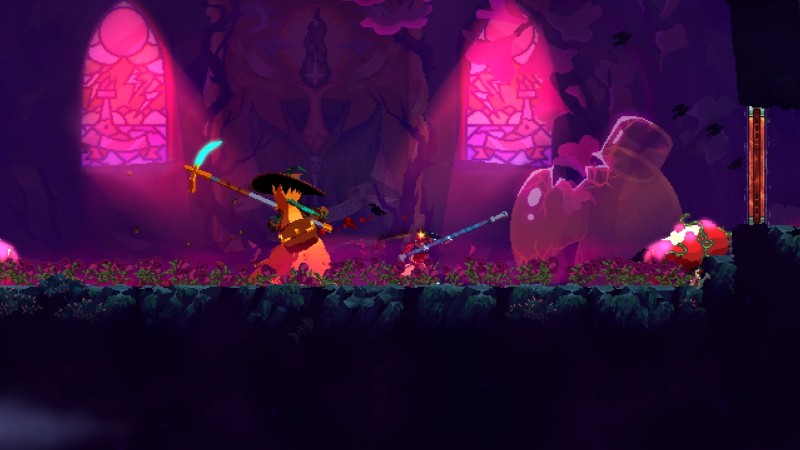 Dead Cells was one of 2018’s best games (and our favorite roguelike), and it has a big DLC arriving in just a couple of weeks. Fatal Falls launches January 26 for consoles and PC, and injects the already stellar experience with deadly new enemies, additional biomes, and, of course, a fresh arsenal of weaponry.

Two mid-game biomes, The Fractured Shrines and The Undying Shores, are parallels to the Stilt Village, Clock Tower, and Time Keeper zones and serve as alternate paths for those areas. That gives players additional routes to help freshen up the middle section of runs.

Players will combat new enemies like the Myopic Crow and Clumsy Swordsman as well as big bad The Scarecrow (who fans may recognize as a certain gardener). To slay these threats, you’ll need one or all of the seven new weapons: Lightning Rod, Ferryman’s Lantern, Scarecrow Sickles, Iron Staff, Snake Fangs, Serenade, and Cocoon. New power skills come in the form of a flying sword that relentlessly slashes foes as well as scythes that follow players and are attracted to enemies. Players also have 10 new outfits to help them dress for the occasion.

Alongside Fatal Falls’ launch is a new bundle, Dead Cells: The Fatal Seed Bundle. It includes the base game, the 20 free updates, and both paid DLC’s. Switch players can pre-order it now and get 33% off. The same discount will apply to other versions of the bundle when Fatal Falls launches on the 26th. That includes 50% off the base game (a nice intro price for newcomers) and 30% off The Bad Seed standalone DLC. These discounts begin January 26 and run into mid-February.

You can read our glowing review of Dead Cells here.