Monday is obviously the start of a new week, but it is also the moment when GfK and SELL deliver us the ranking of the best sales of video games in France, both on consoles and on PC. For week 47 (we will soon be approaching the end of the year), the one that corresponds to the sales made between November 22 and 28, 2021, we realize that Pokémon Sparkling Diamond and Pokémon Sparkling Pearl seem to be here to last for long months, like all Nintendo Switch games which are still among the best sellers in France. If the two Nintendo games prance in first and third place, we note the arrival with a bang of Farming Simulator 22 which climbs to 4th place in its PS4 version. It’s better than Just Dance 2022, which also manages to place itself in the Top 5, but it’s still weaker than FIFA 22 which has recovered.

On the PC, on the other hand, Farmin Simulator 22 hegemony is no longer to be proven since the farm management game from GIANTS Software is placed in first and third place, followed by another management game, but footballistic this time, namely SEGA Football Manager 2022. There you have it, you know everything! 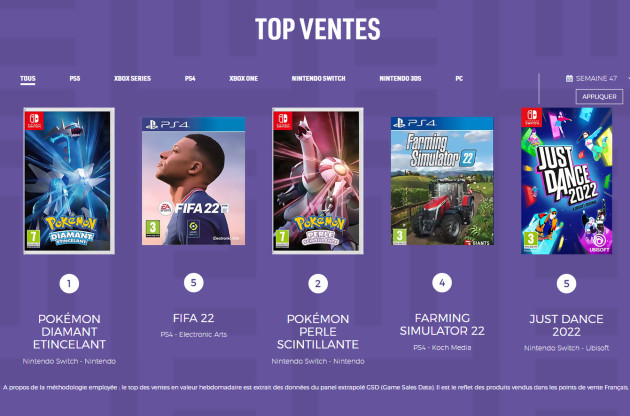 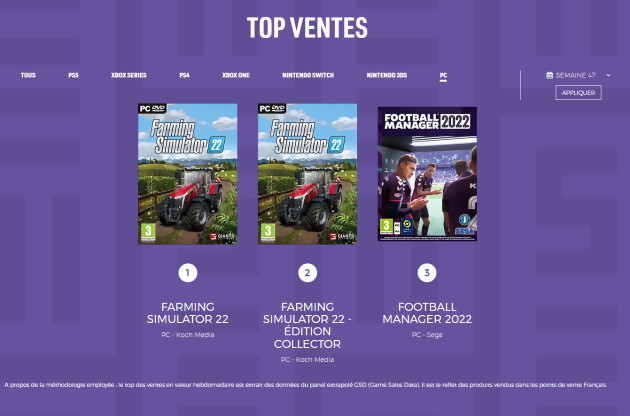