BioShock: he remakes the game in VR in Half-Life Alyx, the result is striking 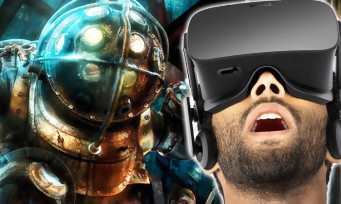 If Half-Life Alyx is one of the best games ever designed in the field of virtual reality – if not the best – some smart kids intend to exploit its potential for other new experiences. This is the case of Wim Buytaert, a particularly gifted modder who has just presented an extension, obviously unofficial, directly adapted from the first BioShock. When you know the extraordinary world of Ken Levine’s game, it’s hard not to shiver at the idea of ​​immersing body and soul, in VR, in the fascinating city of Rapture.

And Buytaert did it right: he managed to recreate the entire introduction to the game, real underwater city environments and the use of plasmids, not to mention the ever-intimidating mythical Protectors. The icing on the cake, this mod is even based on an OST designed for the occasion! If it’s possible download the mod here, we suggest you take a look at the trailer already released, which shows the allure of this nice amateur DLC. BioShock in VR … this is an idea that kicks us well.