Animal Crossing: the game soon to be adapted to the cinema and it will be a horror film, no bullshit 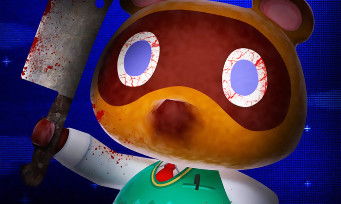 Record-breaking game with more than 31 million games sold in a single year of existence, Animal Crossing: New Horizons now seems to be of interest to other players outside of Nintendo and video games. It is the cinema that seems to be making fun of Nintendo’s license and more precisely one filmmaker in particular: a certain Timur Bekmambetov. Known for the movie Wanted (starring Angelina Jolie and James McAvoy) and the 2016 remake of Ben-Hur, the man has indeed bought the rights to a short film that was released a few days ago during the digital edition of the South by Southwest (SXSW) festival held in Austin, Texas.

The short film, dubbed “Don’t Peek” has been online on YouTube since October 23, 2020 and has accumulated more than 1.5 million views to date. We see a young woman playing Animal Crossing alone in her room, the light dimmed. Very quickly, she realizes that the actions she performs in the game have repercussions in real life, and more precisely in the room where she is. If she has fun at the start, very quickly, the atmosphere turns gloomy and we realize that a macabre creature has used her to teleport in his world. Directed by Julian Terry, this short film as they say, suddenly caught the attention of Timur Bekmambetov who seems ready to take the principle of a genre completely at odds with the atmosphere of the initial game to make it a totally offbeat work. In fact, we are hot potato at JEUXACTU, and we are already talking about it in our daily show 5 News & Rumors per day.