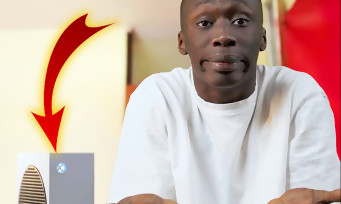 Black Friday, Thanksgiving, Christmas, the end of year celebrations are here and on the side of publishers and manufacturers, we are racking our brains to be noticed with the general public. At Microsoft, to further boost the Xbox Series S marketing campaign, we decided to call on Khaby Lame. His name might not mean much to you, especially if you haven’t installed the Tik Tok app on your smartphone, and yet this 21-year-old has become the platform’s most influential man with over 121 million followers. For more than a year when the COVID pandemic hit the world, Khaby Lame has made millions of people laugh without uttering a single word, simply by making use of these comical expressions. His magic formula? Make fun of other videos posted on the Internet, such as tutorials supposed to simplify people’s lives when they are complex or do not make sense. It is with this same principle that he puts forward the Xbox Series S, proving that it is easier to play Fortnite to make a cabin than to try to build a wobbly one with your own hands. The ad works wonderfully with more than 235,000 views in not even 48 hours, especially since Khabe does not forget to make people laugh with his facial expression.