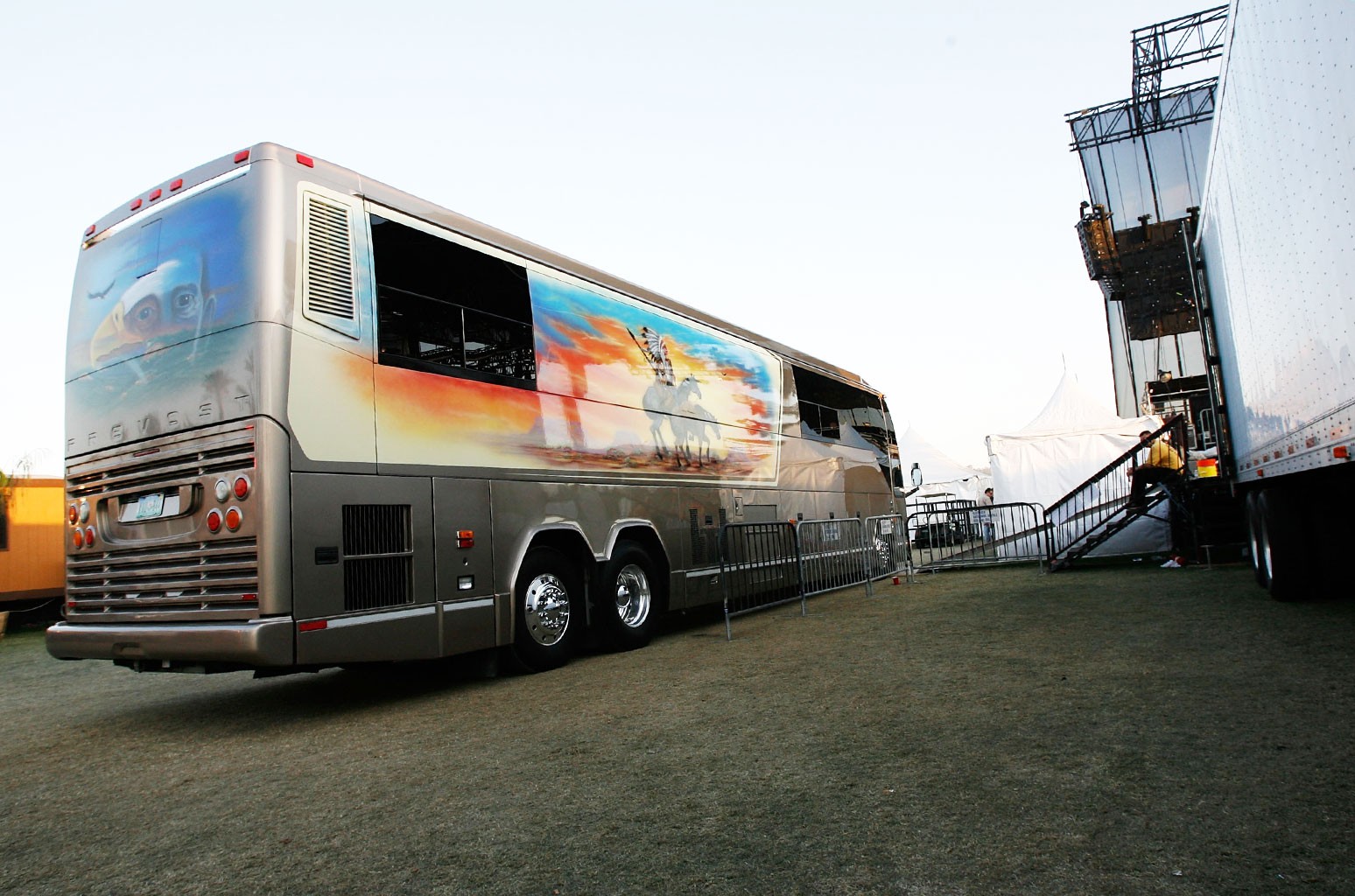 Every month since March 2020, Jamie Streetman and his colleagues at Coach Quarters in Nashville have fired up one of their 20 tricked-out tour buses, used to transport stars like Jay-Z and Jack Johnson, and taken it for a ride around town. They putter along the Briley Parkway loop, stopping for a bite at West Nashville barbecue joint The Ridge, returning after 40 miles.

“Anything to stretch their legs,” says Streetman, the company’s operations manager. “They’re better when they operate. We try to send a different one each time to get them moving.”

After 15 months of inactivity throughout the pandemic, hundreds of tour buses are suddenly being pressed back into action as touring bands return to American highways. Foo Fighters are at Madison Square Garden on Sunday (June 20), Green Day begins a stadium tour next month, Lollapalooza and Governors Ball return this summer and artists from Lynyrd Skynyrd to Thundercat are on the road. But tour buses aren’t made to sit around for months, then revved up and rushed back into action. There are belts to remove, pulleys to spin, fluids to top off and crank cases to keep dry, not to mention maintaining TVs, audio systems, WiFi and bathrooms inside.

“They’re like workhorses,” says Doug Oliver, general manager of Pioneer Coach in Nashville, whose 50-some buses have transported road regulars from James Taylor to Old Dominion. “They want to be running. We don’t like to let them set for long periods of time.”

Financially, those who run tour bus companies view the upcoming concert schedule with relief. Hemphill Brothers lost $30 million in revenue from March through December 2020 and “had to downsize a little bit,” says CEO Trent Hemphill, who co-owns the company with his brother Joey. Coach Quarters had to take out a small PPP loan to afford the $7,000-8,000 it owes on each of its buses. Like artists, roadies, lighting and sound companies and rehearsal studios, bus companies have teetered on financial ruin. But Hemphill estimates 50% of its more than 100-bus fleet will be on the road in July, then 90% in September or October: “To see a nice sea of revenue coming, you know you can meet all the challenges.”

Mechanically, the coach companies are scrambling to meet the sudden demand for buses packed with leather couches, high-end audio systems and full-length mirrors. “We can change the oil, check wheel seals and pressure, do everything possible, before they leave,” Streetman says. “But until they get moving and get the joints worked out, it’ll be interesting, for sure.”

“One of the key things is taking the belts off and spinning the pulleys,” adds Robert Hitt, aftermarket training director for Prevo, which supplies much of the inventory for tour bus companies. “Some of the things you take for granted really need to [have] a close look.”

As tours return to the road, production managers must deal with complicated issues that did not exist before March 2020. Zito, production manager for Green Day, says several coach companies sold portions of their fleets during the pandemic due to such low demand. He hopes Green Day won’t have to contend with this issue, since relatively few artists will be on the road when the band returns, but he foresees problems when touring hits critical mass later this year.

“Especially coaches that have the beds in the back,” says Zito, who pivoted during 14 months of the pandemic himself, selling 30,000 cinnamon rolls in Nashville for charity with his wife, Christin. “It’s a real challenge on the inventory side.”

Some tours are picking up where they left off, bus-wise. Milky Chance was able to keep its bus reservations from a mid-size-venue tour postponed from March 2020 to this fall. “I was in a lucky spot,” says Rob Steiger, the band’s Germany-based manager. “I had an existing old contract, and they said, ‘Hey, Rob, sign now and we got you covered.’ I had first pick, in a way.”

Many top coach companies had to pivot during the pandemic, then pivot back. Hemphill’s Travel Like a Rockstar handled vacations and relocations. Coach Quarters provided buses in Lake Charles, La., to help the relief effort after Hurricane Laura last October. Oliver, of Pioneer Coach, delivered buses to tourists for golf outings and family trips. “Sadly, we furloughed a lot of our folks,” Oliver says. “But we kept a core group that continued to keep the equipment up.”

Pioneer Coach spent the past 15 months replacing rusted pipes and rotted hoses and winterizing batteries and cables, and Oliver is certain the company’s 50-some buses are ready to roll. He’s still worried, though. “Maybe, like Y2K, we’re just afraid of something that doesn’t happen,” he says. “We know there will be some issues, but we want to be as prepared for them as possible.”

During the pandemic, Mike Kaylor, a Florida Coach driver who logged 15 years on the road with Neil Young and another year with Lady Gaga and her family, stayed home in Kissimmee, Fla. He spent most of the 15 months helping the coach company refurbish rock-star buses into consumer motorhomes, building couches out of wood and wrapping them with leather.

“You’re used to wearing a nice Polo golf shirt, going out and working in an air-conditioned office all day – basically your bus — and going into a real nice hotel room to sleep,” he says. “And now you’re getting down and dirty all day. Not that there’s anything wrong with it, but what a change.”

Spending more time than ever with his family, including two young daughters, Kaylor thought about continuing at home, working on-site at Florida Coach or another company. But the rock n’ roll lifestyle is too alluring, and he can’t wait to get back on the road.

“When you’re home, you miss the thrill of being able to leave a venue with a police escort knowing you have an artist in the back and a line of people funneling in to catch a glimpse of you,” he says. “It’s in your blood.”