Tainy and Yandel Reflect on Friendship, Legacy and the Inspirations Behind Album, ‘DYNASTY’ 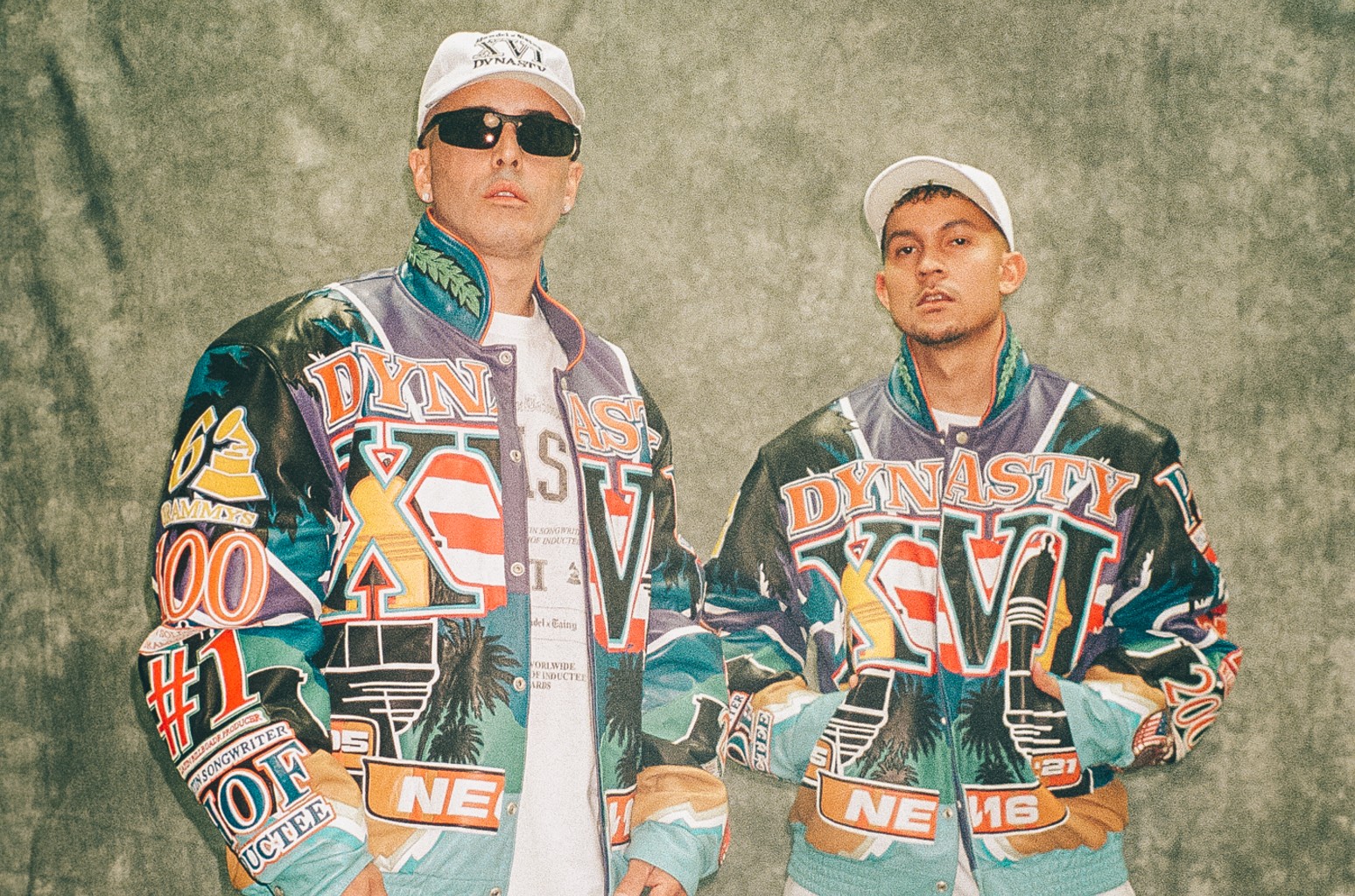 Before becoming one of the most accomplished reggaetón producers of the new millennium, Tainy dreamt of being the next Allen Iverson. “That was my guy,” he says. “I would’ve been a Philadelphia 76er.”

Although his NBA dreams never came to fruition, the decorated Puerto Rican producer has reached all-star status, scoring his most recent alley-oop alongside longtime friend and collaborator, Yandel, on their album, DYNASTY.

Inspired by their own laundry list of accomplishments and one of basketball’s greatest dynasties — the Chicago Bulls –Tainy and Yandel carefully pieced together the nine-track album, weaving in a visual narrative reflective of the Bulls’ 1990s championship run.

Capturing the nostalgic feel of ’90s championship jackets, the Jeff Hamilton-designed pieces boast Yandel and Tainy’s achievements — namely, 25 Billboard chart No. 1s, over 200 RIAA certifications, and a combined six Latin Grammy wins. The hit-making duo collaborated with Hamilton on a four-piece Starter collection, sold exclusively through Greenhouse and Foot Locker, including a t-shirt, hat, hoodie and jacket that range from $40 to $440.

Outside of celebrating their independent legacies, the collaborative album also commemorates 16 years of friendship. The pair met when Tainy, born Marco Masís, was a 14-year-old aspiring producer, working under Nelly “El Arma Secreta.” Even then, Yandel, 13 years his senior, was captured by the budding producer’s potential. “I knew from the beginning where Tainy would go,” says Yandel. “He’s very intelligent, very wise, his music is on another level.”

“[Yandel] is one of the people who is responsible for taking the genre to where it is right now,” says Tainy. “To me, it’s an honor to be alongside him.”

Layered beneath Yandel’s collar, a glistening diamond nameplate chain dances in the studio lighting, as he gushes over his favorite sport and DYNASTY inspirer, basketball. “I fell in love with basketball through Michael Jordan,” says Yandel. “In Puerto Rico, basketball and boxing are classic. That’s why I love this project, because we carry the concept into the videos and with the [Starter] jackets.”

“When we’re not making music, we’re playing 2K,” echoes Tainy. “It’s something outside of music that really connects us… I knew we could execute [the concept] correctly because we know the ins and outs and we’re passionate about it.”

While the two are no strangers to high-profile collaborations, DYNASTY uses features sparingly, centering the pair’s musical chemistry, Tainy’s imaginative production and Yandel’s distinctive, layered melodies. While many tracks stick to the tried and true reggaetón formula, there are a few that break free from the mold — drawing in influence from other regions and genres. “Si Te Vas,” the album’s second single featuring Brooklyn-born artist, SAINt JHN, was inspired by Afrobeats riddims.

“There’s a lot of similarities between music from the different islands,” says Tainy. “From listening to Afrobeats… we tried something new, rather than just going back to the old school [sound].”

Billboard caught up with Yandel and Tainy at the DYNASTY press conference, where the two shared insight into their musical legacy, collaboration with Starter, as well as a potential regional Mexican album.

How did the collaboration with Jeff Hamilton come about?

TAINY: When we decided to go with the basketball championship theme, I said, if we’re gonna do it, we can’t go halfway and do a lookalike jacket, we’ve got to go for [Jeff Hamilton] or just change the entire concept. It was just a matter of our team reaching out and starting the conversation. As soon as we got those jackets and him on board, everything else fell into place. ​​He came into the shoot, he sat down with us, told stories about [his time with] Michael Jordan, Kobe Bryant. He was super excited to be a part of this.

Outside of DYNASTY, what was your most memorable collaboration?

YANDEL: “Pam Pam” was really awesome. I remember we were in Luny’s studio, we were the last ones there and Tainy was working [on some beats] and the idea came to do a “Lambada” reggaetón [song] and Tainy was like, “Let’s do it!” I also liked “Abusadora,” it was a song that opened a lot of doors.

TAINY: There are so many [songs] that for me are special but didn’t have the crazy success that the others had, they just had great feeling. With “Tus Sabanas,” [and] “Aprovechalo,” it was amazing seeing [Wisin and Yandel] gravitate towards my beats and just having this constant connection. To still be making music together today is something rare between a producer and an artist, but thank God we have that.

At the end of the “Si Te Vas” video, we see a Rauw Alejandro cameo. Is that foreshadowing the next video?

TAINY: Yeah, it’s all done like a series, so it’s all connected. We [did] probably three days of shooting, but they’re all in the same concept. It’s the team in the bus, winning the championship, running to the court. It’s meant to feel like you’re seeing a documentary. It’s cool that you get to see that little cameo at the end because that’s what’s coming next.

You’ve spoken before about the parallels between hip-hop and reggaetón, tell me more about that.

TAINY: I love studying music and the history of artists and genres, and I’m a huge fan of hip-hop. So I get to see the growth, how it started, how it was marginalized, how [rappers] were talking about [societal issues], then went into the commercial side [or] the gangsta side. Growing up in Puerto Rico I started to see it was kind of like how [reggaetón] started. [Rappers] couldn’t get played on the radio, the government wanted to put in restrictions and laws specifically for that genre. It’s so cool to see how similar they are and how now hip-hop is an established genre and reggaetón is the face of the Latin community.

How has reggaetón grown since you entered the industry?

YANDEL: The music has evolved to another level. When we used to record, the sound felt singular, the voices and instruments. Now everything feels dynamic, sound for sound. The mixes sound bigger. When we were growing alongside the genre, we didn’t know where we were going. We just liked the rhythms and rapping to it. It had a dance that was really sensual at the time and I remember at the clubs, we’d perform and people went crazy. It was a cool feeling. And it’s had a big evolution, the music is everywhere. It’s awesome.

TAINY: I see there are a lot of subgenres under reggaetón. You can have romantic, hardcore, high tempo, slow tempo, and now it’s not just in Puerto Rico, it’s in Colombia, Argentina, Cuba, Mexico, everywhere has their own specific sound. You may not like Yandel, but you like J Balvin — or you may not like what J Balvin says but you like Rauw Alejandro. There’s a lot more room to have different taste, ideas and combinations. It makes it more special and able to transfer to different spaces around the globe.

You mentioned potentially dropping a regional Mexican project. Is that on the horizon?

TAINY: We’re open to trying new stuff and we appreciate the music — but coming into a different genre, you need to learn about it and do it the right way, not just do it because it’s poppin’. That’s something we’ve learned out of respect. When reggaetón is poppin’, everybody does a bad version of it. [Instead], just come to the right people, get to know [the genre] and learn. Find your own way into it so it feels authentic.

If that happens and we get to that point [with Regional Mexican], then amazing. We can’t just go into because people are doing it all around [us]. I’m still getting to know the artists but from those who I’ve spoken with, I’d [love to work with] Natanael and T3R Elemento. It’s a new challenge for us.

What advice do you have for aspiring artists and producers who hope to build a dynasty?

YANDEL: Work hard. I’ve always said that when you lay down to sleep, you have to know what you’re going to do tomorrow. Always think about what you want to accomplish and forget about the critics and non-believers, you keep going and you’ll achieve what you want.

TAINY: You have to have the mentality to polish your talent, decipher who you are. Don’t be afraid of trying things that inspire you, as opposed to just doing what everyone else is doing. Believe in yourself, try whatever to you feel because that’s the whole purpose of art and music. Just do what you love and what what brings you passion.