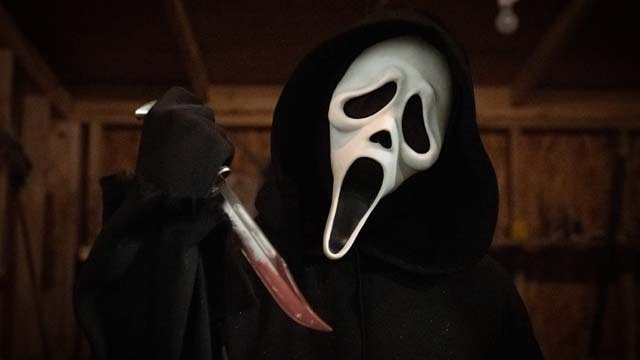 The 2022 iteration of Scream, directed by the duo Matt Bettinelli-Olpin and Tyler Gillett, and the fifth installment in the horror film series, follows the new main character Sam Carpenter (Melissa Barrera), who comes back to Woodsboro after her little sister, Tara (Jenna Ortega), is attacked by the returning Ghostface. This attack seems to be the beginning of mimic knife attacks terrorizing the town of Woodsboro, and specifically the high school, just like the original Scream film.

Scream (2022) is just as self-aware, if not more so than the previous four in the franchise. They started referencing the Stab movies, the movie series within the Scream franchise. The first Ghostface used the Stab movie as a reference for his own kills, which made the whole franchise very aware of horror slasher tropes; they then play on those.

The acting in the movie is extremely strong and it interestingly brings back the original cast, making this film the most ‘passing of the torch’ style movie possible. The young characters taking over the franchise are quite vibrant and able to carry the film well by themselves. It is primarily a cast of younger actors, with the exception of the original four survivors, who all hold their own very well.

To add to the metagame that the movie is pulling, a lot of the characters have names that reference horror director greats, such as Sam Carpenter being a homage to John Carpenter. Then there is Wes Hicks, who is named after the great Wes Craven.

There are quite a few really brutal death scenes, so slasher fans will be very happy with that. One scene the filmmakers could have done better is the lead up to a knife-in-the-neck scene. Sheriff Hicks (Marley Shelton) leaves to go get sushi for herself and Wes. while she is out, she gets a call from Ghostface saying she would never make it home in time to save her son. Naturally, Sheriff Hicks tells everyone to go to her house, but somehow, she makes it there first and is caught off guard as she walked up the steps. The issue is that the entire precinct would be converging on Sheriff Hicks’s house, yet they didn’t get there in time or even close to it. The scene could have been saved by adding police sirens at an opportune moment. Something so small would have made it much more believable.

Other than that particular scene, the film is rather satisfying. There are two messages that are communicated which are very important for people to keep in mind. First off, when the movie nerd girl, Mindy Meeks-Martin (Jasmin Savoy Brown) is laying out the rules for the “requel,” as she calls it (a reboot/sequel), she goes on to explain the nature of fandoms and the irony of them being driven by love but being quite hateful when anything gets changed from the precious originals. This part is important because it opens up the discussion of fandoms in real life.

The second aspect of the movie that delivers a really important message is near the end among the survivors. The question is asked, “Am I going to be okay?”, to which the response is, “Eventually.” This is a message that needs to be spread more often. Too frequently, movies take the route of doom and gloom for their characters, but this ending shows that everything can work out in the end. It may be hard, but everything will eventually be okay.

The Yellowstone Universe Has Added Harrison Ford And Helen Mirren As New Prequel Details Are Revealed
17.05.2022 22:30

Sam Asghari Opens Up About How He And Britney Spears Are ‘Moving Forward’ Following Miscarriage After Some Fans Reacted Negatively To New Post
17.05.2022 21:43