Resident Evil Village: we saw the game run on PS5 in 4K, our first impressions

19 Apr at 18:00
Games
No Comments
3
At the time of writing, owners of PS4 and PS5 have certainly already completed the second demo of Resident Evil Village deployed this weekend on the PlayStation Store and limited to about thirty minutes. A much too short appetizer that Capcom decided to dub with an hour-long gameplay video intended for the press this time. If the first half of the sequence includes elements unveiled yesterday, however, the sequel takes place in the castle of Dimitrescu, a passage that will not be offered on PlayStation consoles until next weekend. Quick summary of our trip to Eastern Europe, Capcom having asked us not to spoil certain sensitive scenes, of course.

Unlike yesterday’s demo, this preview hands off of Resident Evil Village sets out to set the scene. Indeed, instead of propelling us directly to the heart of the village, it begins with the ringing of a smartphone which is in the hand of a corpse. Ethan struggles to come to his senses, but still answers the call. On the other end of the line, a man who thinks he is talking to his partner; he reminds her that time is running out and wants to know if the package is safe. Still confused, Ethan asks him where Chris Redfield and his daughter Rose are. End of the conversation. These few seconds confirm what we already knew: things have turned badly between the two men, and it seems that Claire’s brother has indeed kidnapped Ethan and Mia’s offspring. Using his flashlight, Ethan makes his way through the dark, frozen with cold. He then sees a hut, with a trail of blood on the threshold of the door. Once inside the chalet, he begins to inspect every corner; a way for Capcom to remind that exploration could not be more vital in Resident Evil Village. Moreover, the traces of blood lead him to the basement where he finds the portrait of Mother Miranda – which we will meet later.

Satanism and the occult sciences are avenues the series has never explored; a turn that is not to displease us, especially in the shoes of an Ethan whose vulnerability is as stressful as it is enjoyable.

These minutes spent in the cabin also allow the developers to emphasize the oppressive atmosphere intended for this episode. Now that they have mastered the mysteries of first-person view, the priority is clearly to take a step forward in terms of sound design. The work was already remarkable in Resident Evil VII, but having replayed it recently, we finally notice that it is essentially aesthetic. Clearly, with a classic Resident Evil, the impact would likely have been the same. There, whether it’s the squeaks, the wood creaking with each step of the character, or even those muffled noise coming from the roof, each sound really fits into this FPS approach. After slipping under a piece of furniture, Ethan finds himself in the open air and heads straight for the village dominated by the castle of Dimitrescu. Impossible not to think of Resident Evil 4 and its Ganados. Except that here, no creepy ritual: at first glance, the place seems deserted. The lull usually precedes the storm, Ethan takes the opportunity to take a look around; the opportunity to get hold of a knife that we will keep until the end of the game – a priori, it will not be conditioned by a wear gauge.

As often, we can use it to break crates and vases, and thus recover a whole bunch of items. As he examines every corner to try to find the trace of Chris and Rose, he is on the verge of being killed by one of the few survivors of the village. While handing a semi-automatic pistol to Ethan, he makes him understand that half-man, half-wolf monsters (the Lycans) have invaded the place and lurk above their heads. Survival horror requires, you will have to be careful to save your ammunition so as not to be short at the worst moment, knowing that there will be a way to craft some yourself if you have the necessary materials (powder, for example ). This is also true for other items, such as the famous first aid kit (plant + chemical fluid) capable of re-greening our health gauge all at once. Other slots will be unlocked as we progress, which will undoubtedly strengthen the usefulness of the merchant The Duke. Not only will it be possible to buy a whole bunch of items from him, but we can also sell him items found on corpses or while exploring the surroundings, and even ask him to improve our equipment. The other good news is that it will travel to different places in the game, especially in safe rooms. Perfect.

WOLF ARE YOU THERE ?

Since we are talking about the little helping hands granted by the game, let us specify that an alert will be displayed when we have enough resources to craft a particular item. In times of panic, it can be useful. What can be useful just as much, it is to barricade oneself (with the help of a library, in this case) to avoid being taken in traitor. Well, generally, when faced with enraged Lycans, these makeshift dams don’t last very long, but it does give you time to scratch a few extra items and find the best position to take out the monsters. Explosive barrels are the order of the day, as are shortcuts with the directional cross to change weapons on the fly, or the possibility of protecting yourself behind our arms to repel the opponent – which has the effect of stun and to allow us to regain the upper hand. And then, sometimes, it will simply be necessary to accept to flee and let the storm pass, the Lycans being however evolved enough to follow us on the roofs and to penetrate in the dwellings. We could see it elsewhere, Ethan finding himself surrounded by a horde of creatures. In the end, his salvation came from the castle bell which suddenly started ringing. Again, purists will see it as a nice nod to Resident Evil 4. 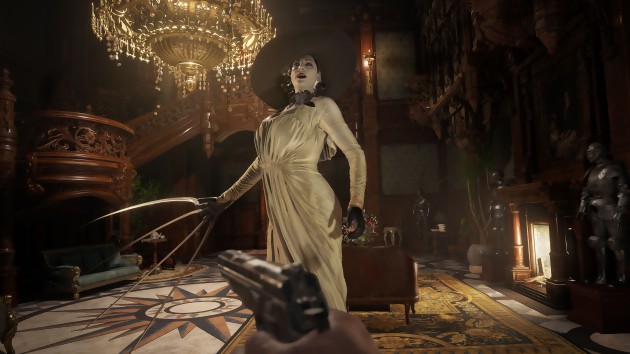 The rest of the demo joins the trial version released yesterday on the PlayStation Store. We let you take a look at all the videos that abound on YouTube to better focus on the part dedicated to the castle of Dimitrescu. And the least we can say is that Ethan gets to know Karl Heisenberg in a rather brutal way, the latter dragging him to Mother Miranda’s feet. We then witness an argument between Alcina Dimitrescu and Karl who each wish to take charge of Ethan’s fate. Mother Miranda decides in favor of Heisenberg, which reveals some friction between the participants of this sinister meeting. By the magic of the ellipse – and not to reveal all of the intrigue, of course – it is not known how Ethan manages to escape Karl’s macabre game. It is therefore in one piece that he goes to another area of ​​the castle where Bela, Daniela and Cassandra, the three daughters of Alcina Dimitrescu, are waiting for him. Forcefully dragged into one of the rooms of the castle, he is promised a slow and painful torture, Alcina preferring to first warn Mother Miranda that Heisenberg failed miserably in the task she had given him.

This brief moment of tranquility is an opportunity to underline the graphic level of Resident Evil Village. Beyond the quality of the lighting, it is above all this festival of textures that makes you dizzy. Whether it is the village or the castle, each element has been the subject of care that commands respect.

The following sequence pits Ethan against one of the three sisters who, as we recall, will be able to transform into a swarm of insects. Noticing that the bullets have no effect on her, he decides to escape through a passage leading to the underground. This brief moment of tranquility is an opportunity to underline the graphic level of Resident Evil Village. Beyond the quality of the lighting, it is above all this festival of textures that makes you dizzy. Whether it is the village or the castle, each element has been the subject of care that commands respect. The snowflakes which caress the screen here, the humidity which eats away at the bricks there, or even these large halls which recall the majesty of the Dimitrescu residence; it’s great art, really. The Lycans are not left out, with special attention paid to facial animations that reflect their cruelty. If this will also be the case in the village, the castle – which at times is reminiscent of the Spencer mansion with its tapestry and moldings – will house a number of puzzles to be solved. We won’t tell you any here, but it’s still a classic. The same goes for areas that will require you to have the appropriate items (wrenches, bolt cutters, etc.) to access them. Different maps will be there so that Etan can locate, the color code has not changed (gray for unexplored areas, red for objects to be recovered, and blue for completely cleaned areas). Obviously, you have to expect back and forth to make sure all the doors have been unlocked.

Like Mr. X in the remake of Resident Evil 2, Alcina will not hesitate to chase us to the four corners of the building. Like its predecessor, its imposing size means that it has to bend in half to get through the doors; always fun to watch. We also remember the Lycans able to fly, the shotgun and the sniper which should be a treat, as well as the legendary typewriter as a backup system. As for the storyline, we are of course impatient to understand what exactly happened between Ethan and Chris, and why the BSAA agent kidnapped Rose. Hidden behind a window sill in the castle, Ethan overhears a telephone conversation between Alcina and Mother Miranda who tells him about a mysterious ceremony of utmost importance. In short, a priori, after completing Resident Evil Village, a number of questions left unanswered in Resident Evil VII should be answered. All? Maybe not, since rumors indicate that in reality, the game would be part of a trilogy started with Resident Evil VII, and which will end with Resident Evil 9. Yes, that’s pure speculation.