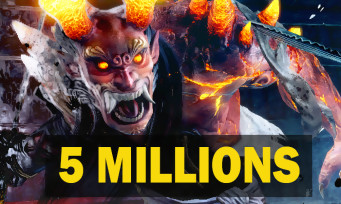 Nioh is now the pride of Koei Tecmo, since the series now has 5 million copies sold worldwide. A figure shared by the Japanese publisher who specifies that this result breaks down as follows: 3 million copies sold for the 1st Nioh released in 2017 and 2 million for Nioh 2 released on March 12, 2020. It is still good tone to specify that on these 2 million, one compatibilizes the base game but also its complete edition published on PC, PS5 and PS4. However, in terms of progression, there is a slight increase in the speed of sale between the two episodes, since these figures were achieved in 13 months instead of 16. We end by specifying that Koei Tecmp is working on a new unannounced game. currently and that he aims to aim for the 5 million copies sold during his career. This is all the harm we wish him.