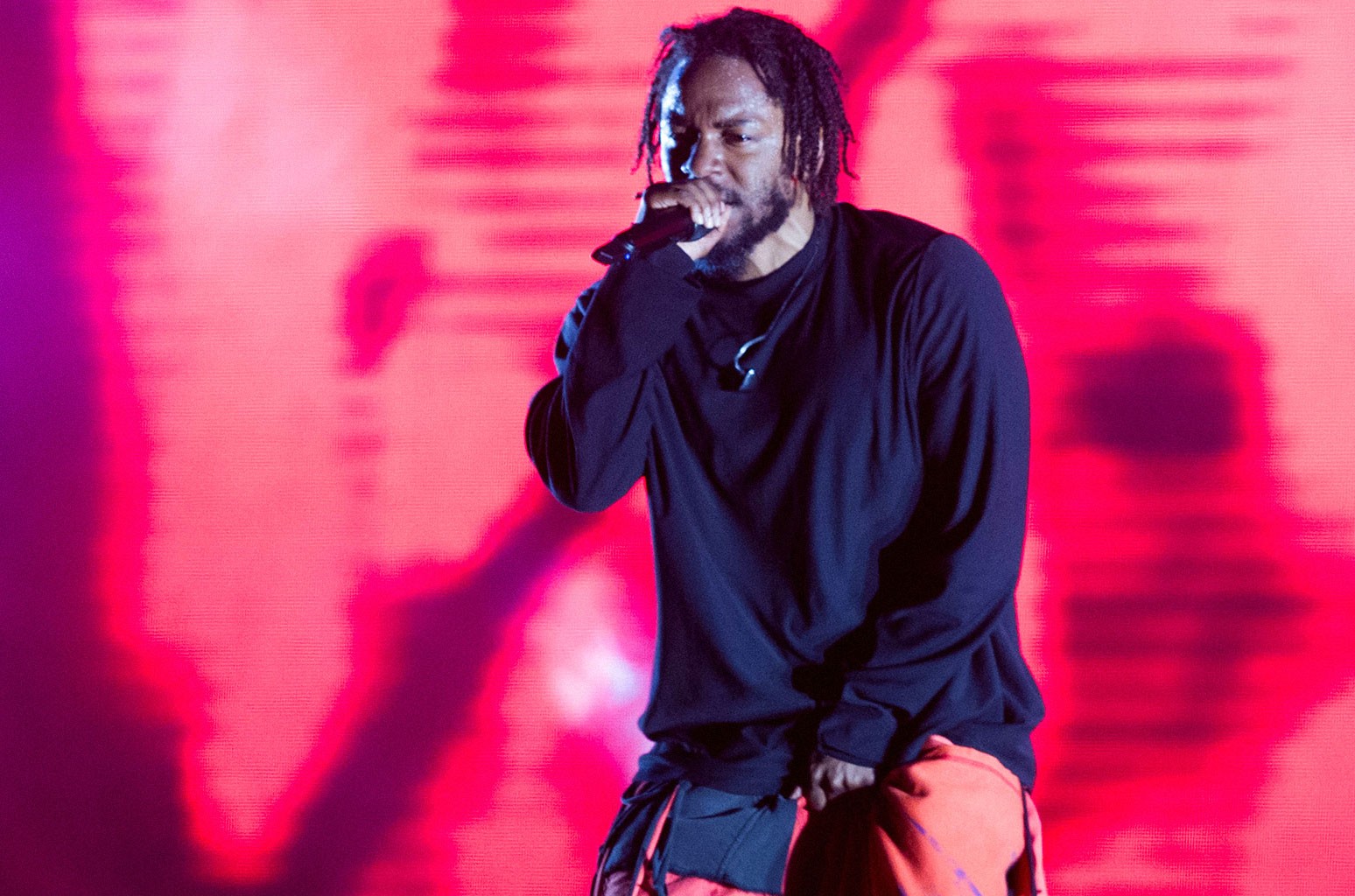 Waves of scattered chatter quickly morphed into a sea of unified voices on Friday night (Nov. 12), as fans chanted the name of Day N Vegas’ biggest headliner of the weekend, Kendrick Lamar.

As thousands released collective cheers, Lamar graced the stage while the sound of fingers pounding vigorously on a typewriter reverberated throughout the crowd. As the introductory piano played, a group of men in maroon suits with white paint drawn on their faces marched robotically onto the stage, Lamar in his bright white ensemble parting the red sea of dancers.

His hair grew considerably since the last time we saw him, touching his shoulders with middle-parted braids peeking out of a white knit cap that matched his top of the same yarn and fringed white pants. As promised on the Day N Vegas flyer, Lamar catapulted his audience through a theatrical exhibition of each era of his artistry, starting with Section.80‘s seldom-performed “F–k Your Ethnicity.”

“Fire burning inside my eyes, this the music that saved my life,” he rapped, as the audience’s enthusiasm swelled. Swiftly, he danced through his decade-old debut album’s track list, as Ari Lennox snapped photos embracing Jazmine Sullivan, the two vibing out to Lamar’s set following their own vocally flawless performances.

Before moving onto “A.D.H.D.,” K Dot had a reminder for his fans: “365 days times two since I’ve seen you.” He repeated the phrase three times, bringing to attention the performance’s positioning as Lamar’s post-pandemic homecoming. While many fans were presumably unfamiliar with Lamar’s first act, it was enjoyed all the same, audience members captivated by the “HUMBLE” singer’s meticulous presentation. For the most part, it was completely absent of talk breaks, aside from a few calls for peace to the world and “left side, right side” commands.

After another handful of cuts from Section.80, Lamar’s dancers prayerfully transitioned into good kid, m.A.A.d city, as a satisfied audience lived out their own music videos, enthusiastically performing the cult-favorite track. All the while, visuals on the jumbo screens showed solitude-filled scenes from Lamar’s native Compton, including Parmelee Avenue.

The smooth track made way for another crowd-pleaser, as the crowd belted out the opening lines to “Backseat Freestyle.” Throughout the one-and-a-half hour set, the dancers mimicked the energy of each track, transitioning from jarring, staccato movements while rapidly waving flashlights in Lamar’s direction, to gentle prayer poses. In some moments, the dancers made way for grade-school children, one of which gave a vulnerable interpretive performance during “Swimming Pools (Drank).”

Through many songs, Kendrick commanded the stage alone, his almost prophetic energy enough to captivate the audience, as he fired off rhymes, never skipping a beat. After teasing the audience with the Janet Jackson sample used in “Poetic Justice,” Lamar quickly moved onto “Bitch, Don’t Kill My Vibe” and his Tumblr-era festival favorite “M.a.a.d city,” arguably the climax of his set.

As the screens transitioned to an inky black and white palette, covered in vintage grain, and a corps de ballet made up of young women, fluttering in the background, it was evident that we were entering Lamar’s third act, To Pimp a Butterfly. The gentle dance exploded into the danceable “King Kunta,” giving the audience a chance to warm up their hips to a handful of tracks from the funk and jazz influenced album, including “i,” “Alright” and “The Blacker the Berry,” before regaining the reins and breaking into the the Pulitzer prize-winning portion of the show, DAMN.

After running through album favorites and the less performed “LUST,” Lamar delivered a pyrotechnic-filled performance of “HUMBLE,” facing away from the crowd and performing into the camera for the first time. The screens and stage abruptly cut to black, and the audience returned to their initial chanting of “Kendrick,” as fans were left thinking what songs the chart-topping artist would fill his final minutes with. Considering the show was taking place in Baby Keem’s hometown, it would obviously be a family affair.

Lamar and Keem closed out with an even more adlib-filled rendition of “Family Ties” and “Range Brothers,” the crowd eager to “get this sh–t” for the first time live. “Vegas, your hometown hero is here,” Lamar said, as a maroon-clad Keem received his first warm welcome at the three-day festival, proceeding his Saturday set. After a second faked end to the show, Kendrick delivered the tender “LOVE” to a karaoke-ready audience, and closed out the artful presentation with one of his favorite songs of all time, “Sing About Me, I’m Dying of Thirst.”

“Vegas, until next time,” he said amid cheers, bidding farewell to fans while seated between his ensemble of predominantly black dancers. “And when I say next time, I mean very soon.”