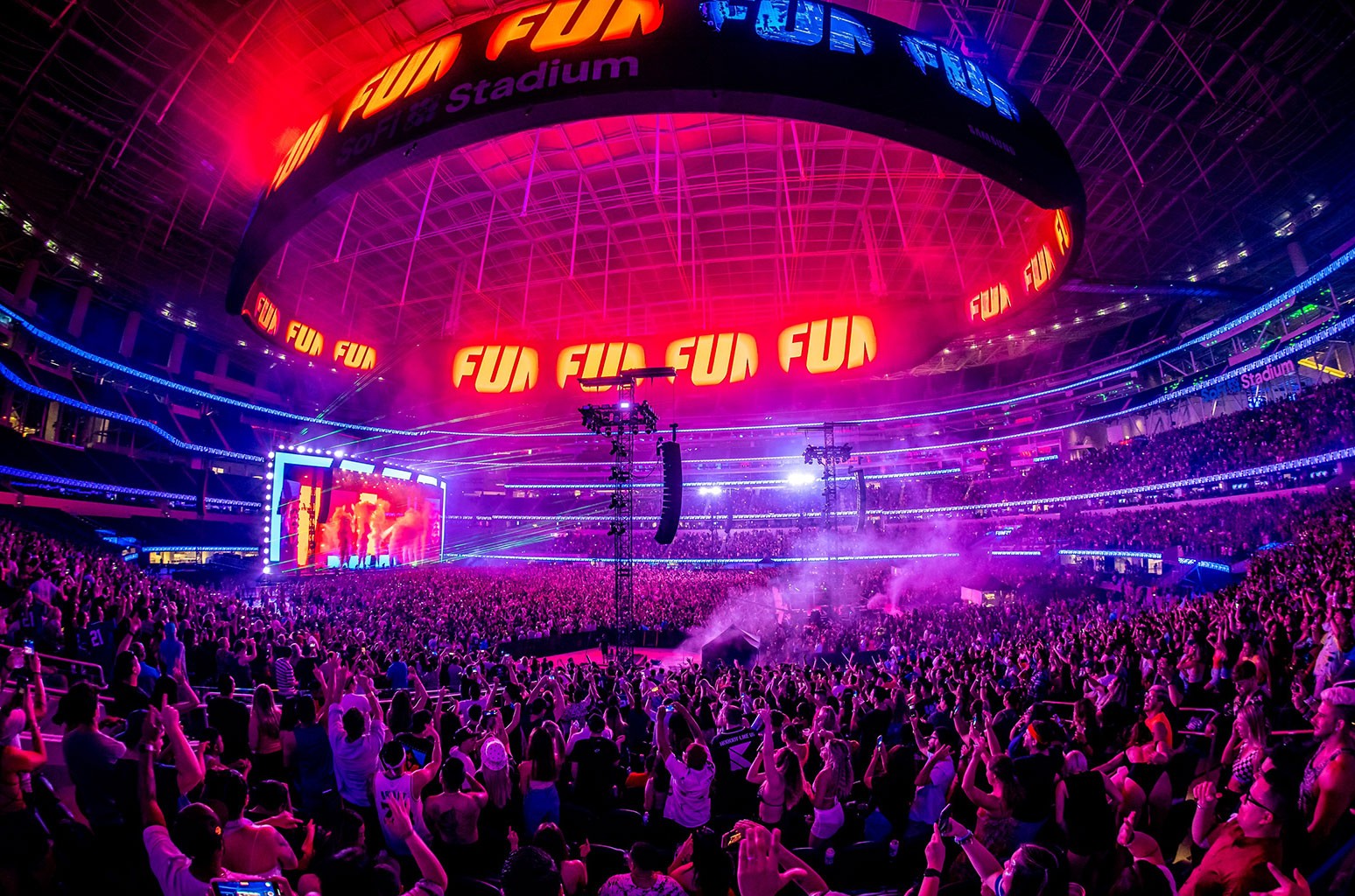 It takes a lot to make history in Los Angeles.

In a city rife with innovation (and controversy), breaking through the barrier of the daily news cycle isn’t easy. This past Saturday, Kaskade met this challenge by playing the first public concert — aptly titled Kaskade: Los Angeles — at L.A.’s newly opened SoFi Stadium.

(While May’s ‘Vax Live’ charity concert also happened the stadium, this event was not open to the public, instead hosting 27,000 fully vaccinated healthcare workers.)

This past Saturday, getting inside of SoFi was a thrill unto itself. For years, Angelenos have watched the looming construction of the football stadium while visiting the nearby Forum or when flying over the site while en route to or from LAX. The 70,000-capacity stadium was erected in the wake of Los Angeles’ acquisition of two football teams: the Chargers and the Rams.

It was due to COVID-19 that Kaskade was able to take the field before both teams. As was the case in many NFL stadiums throughout the U.S. during the 2020 season, football fans in Los Angeles could not attend games inside SoFi, leaving the Chargers and Rams to play in an empty stadium.

However, declining COVID cases and increasing vaccination rates presented a workable landscape for Insomniac Events, the promoter behind Kaskade: Los Angeles (and the producer of many other large-scale events including EDC Las Vegas), to host the show. The event was announced less than two weeks before California Governor Gavin Newsom lifted all social distancing and masking requirements in the state of California on June 15, 2021.

Yet due to a recent sharp rise in reported COVID-19 cases in comparison to previous weeks, L.A. County reinstated a mask mandate for all indoor activities, regardless of vaccination status, beginning at 11:59 p.m. on Saturday night. This was precisely 59 minutes after the producer born Ryan Raddon was scheduled to finish his set. While a handful of attendees wore masks during the show, most went without in the last few hours they were able to.

“It’s part of the draw, honestly,” L.A. resident Danielle Powers said of attending the event without abiding by such protocols. “It’s about time.”

This restless energy was palpable throughout the excited crowd. Unfortunately, event staff was not fully ready to receive the tens of thousands of attendees. (Insomniac was not able to provide specific attendance numbers for the show.) Raddon was astute in encouraging the crowd to arrive early via his social media in anticipation of a potentially frustrating parking situation. Doors opened at 6 p.m. and parking was a cinch at 7 pm, but there was frustration inside the venue.

Fans trying to find their assigned seats as the French house producer Dombresky began his opening set pleaded with security guards who were unsure of where to direct them or where to find correct information. Instructions to turn back to previous locations were frequent, and those previous locations were often found on the opposite side of a full-sized football stadium.

Insomniac too has had a slightly rocky re-entry to hosting live events, having postponed EDC Las Vegas 2021 from May to October and changing venues twice (at the last minute) for the company’s inaugural Day Trip festival in SoCal earlier this month. But given that this was SoFi stadium’s first concert open to the general public, a bit of logistical confusion was to be expected, and despite the fact that the layout of the venue was brand-new to nearly every person there (including the staff), the event ran quite smoothly. (It also demonstrated the current demand for stadium shows, with both Garth Brooks and Illenium playing Las Vegas’ newly built Allegiant Stadium earlier this month.)

In the days leading up to the performance, fans were eager to know who would share the stage with Raddon. In response to the inquiries, in his aforementioned social media he noted that he was contractually forbidden from listing the openers, but that “you need to get there early.” When fans eventually found their seats, they were gifted for their patience with a surprise set by Testpilot, the alter-ego of deadmau5.

At around 7:45 p.m., the producer born Joel Zimmerman walked onto the massive stage set up toward the end zone to the sounds of thumping progressive house. For the next hour, he delivered many of his era-defining hits, including the 2009 electro smash “Ghosts ‘n Stuff.”

When Rob Swire’s vocals from the song shot through the speakers as the lyrics appeared on massive LED walls flanking the stage, the stadium crowd erupted in song, and in that moment it felt like every person in the stadium was aligned. The circular LED screen hanging from the ceiling gave the entire audience dynamic views of the show, alternating between close-ups of Zimmerman behind the decks and aerial drone shots that served as a reminder of just how many people were there.

Many people in the crowd (especially those in the pricier sections up front) looked to be well into their 30s, if not older. This crowd served as their own reminder that deadmau5 and Kaskade have been delivering electronic music since well before dance music fever engulfed the United States in the early 2010s. Younger fans, who also showed up in force on Saturday, may not even be familiar with early tracks like deadmau5’s 2009 “Strobe” or Kaskade’s 2003 “It’s You, It’s Me.”

But both Raddon and Zimmerman maintain their relevance by continuing to deliver for the culture via new music and top-of-the-line performances such as Saturday’s. No matter which way trends bend in the scene, this pair continue inspiring new generations to dive into their back catalogs and in doing so to learn about the history of a genre that Raddon and Zimmerman helped build.

When it was finally time for Raddon to take the stage, the 1936 composition “Adagio for Strings” rang through the venue just moments before the first euphoric drop of mainstage house music via Kaskade’s 2020 single “Solid Ground.” Fireworks shot up from the stage. CO2 cannons unloaded. The crowd was locked, and Raddon took the opportunity to stand on the table and proclaim: “It’s good to be back, Los Angeles!”

The howls and screams that followed from ravers of all generations surpassed any other moment during Raddon’s two-hour set. Cheers were similarly loud when Skylar Grey took the stage to perform her featured vocals on Kaskade’s “Room For Happiness.” Louder still was when Zimmerman joined Raddon during the show’s encore to play their 2008 classic, “I Remember.”

As ten of thousands of people filtered out of the stadium after, many of them chanting lyrics to song’s they had heard just minutes earlier, it was clear Los Angeles’ dance music community is ready for what’s ahead.