Every year it is expected as a Champions League final. Like a title for PSG in Ligue 1. Like a supersonic goal from Cristiano Ronaldo or Lionel Messi. Who is that ? Football Manager of course. The best football management game is back for a 2021 edition, available since the start of the week. With the same interest as last year? It would seem so.

Playing Football Manager means giving up a social life for several days, weeks and months. The image is strong but it is nevertheless real, in view of the enthusiasm caused by the famous management game around the world, by the personal adventures of certain players and the number of hours spent by them on the game in cumulative. Why such a success ? Because FM is a real phenomenon for the assiduous football fan, who finds there the opportunity to scout, or to find young talents in the game who will break through sooner or later on the real fields. But not only: FM, it is also to take the destiny of its club of heart or of one of its favorite clubs, to try an incredible world dynasty with a team of third zone, to send a young average in the national team. In short, the challenges abound. And these challenges, precisely, what does he give this season? 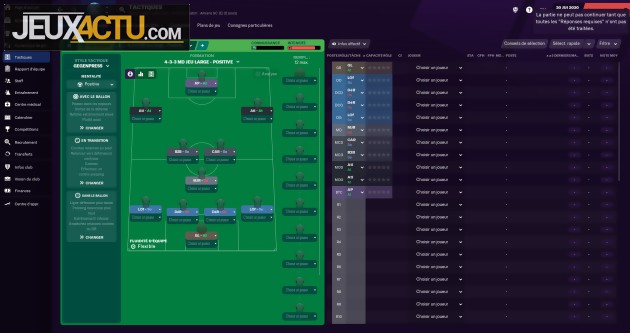 Whether it’s a small hallway conversation, an interview with a player in your office or a pre / post-match conference, everything will always result in a performance of a room or an auditorium, to dress up your interview. .

They are now framed by an interface that has gained in seduction. And a reinforced staging on the important moments of the game, the famous interactions with your leaders, players or the press. Whether it’s a small hallway conversation, an interview with a player in your office or a pre / post-match conference, everything will always result in a performance of a room or an auditorium, to dress up your interview. . The idea went rather well, since it makes this gameplay sequence less frozen. Nevertheless, we would have preferred to see, even with the ultra-dated 3D engine (here we come), a visual representation of this same interview. But in principle, nothing to say and this is all the more true as from now on, you will be able to speak with any actor of the world of football at the time that you wish it. The opportunity to strengthen your ties with your best player, get closer to a potential target or flirt with an agent, whose portfolio of players is particularly attractive. Here again, given some fallout in this type of in-game operations – especially with player agents – the idea is still well thought out.

Still in the same vein, new features have been added to your statements when you speak. Throwing in a bottle of water to show your exasperation or your stroke after a poor performance of your team, waving your arms, clenching your fists or placing them on those hips, here is a small range of postures that you can now associate with your words. Again, the idea is good. Again, it lacks visual representation or even a little regular impact on your players. But it has the merit of existing, of adding spice and realism to the whole. And then, above all, it seems to sow some promises for the future. Considering its addition, it is hard to see the feature leaving us in a year. And knowing the implication of Sports Interactive for her baby, the latter should sooner or later benefit from an upgrade.

Still as prickly for the eyes, the 3D engine is frankly less unpleasant than in the past, thanks to better player animations, a noisier audience and a staging here too of meetings, with the protocol of before- match, warm-up or even a fairly faithful reproduction of the use of VAR. 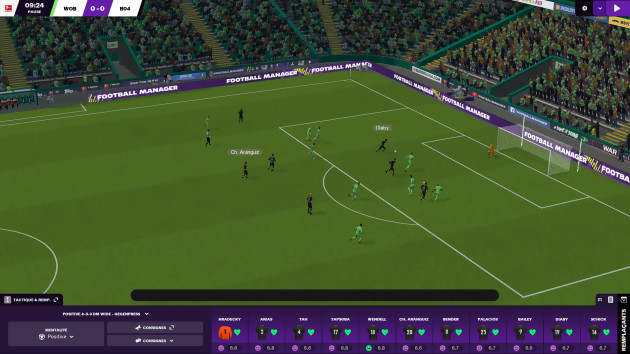 The one who already benefits from it in this 2021 opus is the 3D engine. Still as prickly for the eyes, it is frankly less unpleasant than in the past, thanks to better player animations, a noisier audience and a staging here too of meetings, with the pre-match protocol, warm-up or even a fairly faithful reproduction of the use of VAR. This, given the sometimes lack of clarity of the engine, lack of arguments to be always justifiable over time. But there again, we may be critical (and it is necessary for an annual version), the charm operates. And it operates well. The Match Engine has seen its increased personalization: now, you can select the information you want to see and manage during the game, in order to establish your own dashboard. Useful, this novelty is as much good news for regulars as it is for those new to the experience.

Finally, Football Manager is a game that lives with the times and this 2021 opus is no exception to the rule. In addition to financial fair play or Brexit, the game “welcomes” this season the Covid-19. In a fairly faithful way since the calendar of European competitions is turned upside down, with the start of hostilities in October and a definite impact on the finances of the clubs… At least temporarily. Obviously, no one knows the long-term effects of the pandemic and therefore, the precise negative repercussions for football teams. We can only regret that the English developers of SI have not integrated quarantine cases to manage or more advanced management of the virus within your medical staff. We can also say that given the heavy context around all this and even if realism and topicality are the credo of Sports Interactive, the developers did not want to add more. In the end, the endless and ultimate question remains: should we go through the purchase box for this new episode of Football Manager? Yes, because in addition to maintaining a rich and precise database, the game is equipped with new small tools, small yes but oh so interesting to sublimate this famous content and the interactions present for years. And since these should be deepened in the future … Football fan, you know the rest. 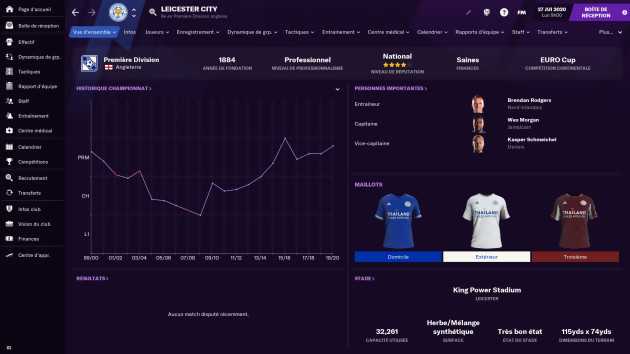 GTA 6: a revolutionary AI and NPC system? A patent announces the color!
Yesterday at 12:38

LEGO Mario: a new set on sale, there are 4 new villains in it, details
Yesterday at 12:31