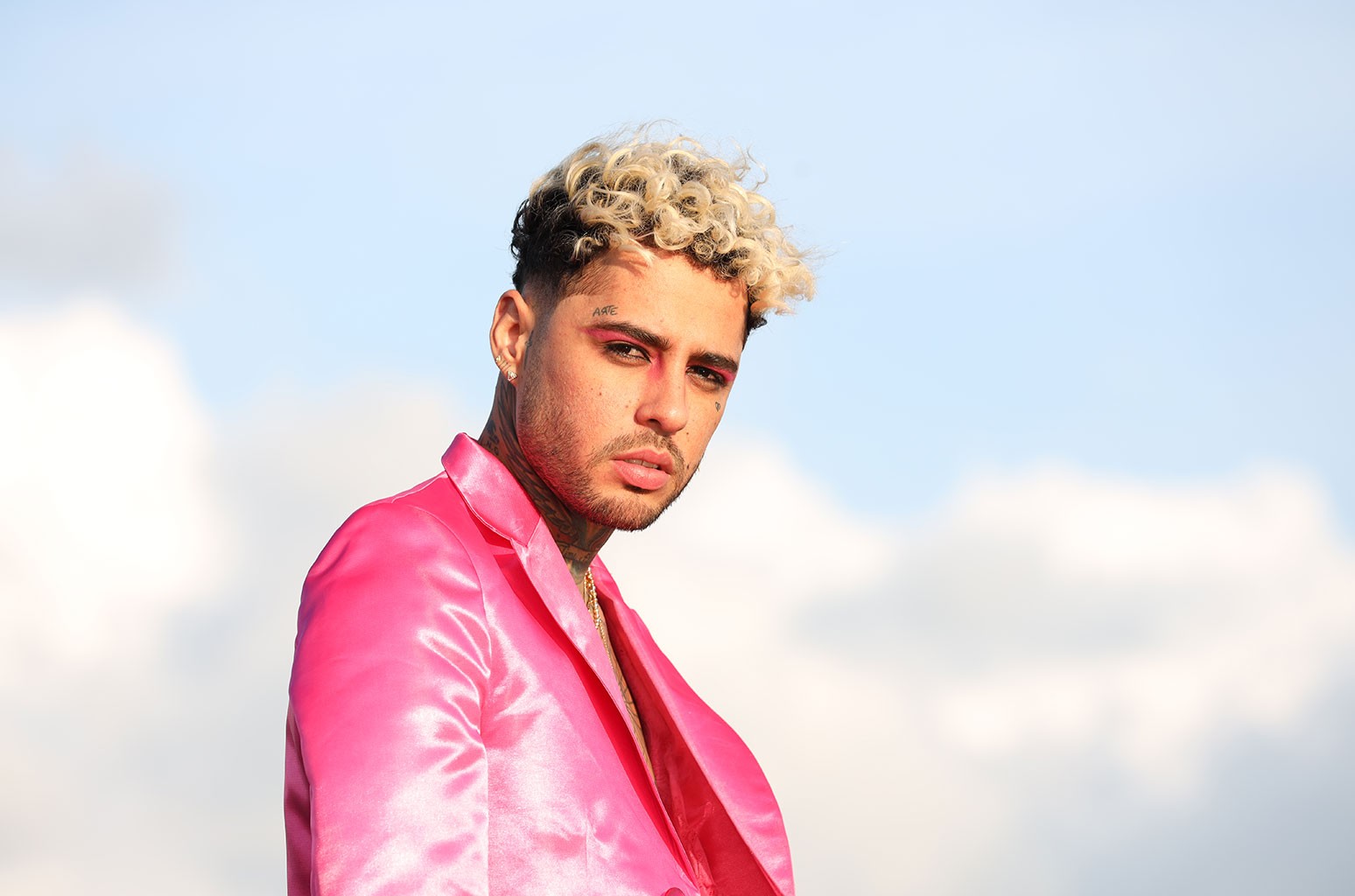 A conceptual album that’s meant to be genderless so that everyone can enjoy equally, Dalex presents Unisex. Home to 18 tracks, the Puerto Rican artist stays true to his R&B essence but also delivers other experimental gems via edgy reggaetón jams, acoustic ballads, and EDM fusions. “With this new project, I intend to unite all the people who not only like music but also use fashion as a way of expressing who they are,” he says in an official statement. “With ‘Unisex,’ I want to influence everyone to dare to think outside the box, break stigmas, and live fully.”

Focus track “Maquina del Tiempo,” with Rauw Alejandro and Lyanno, best attests to that, showing Dalex in a more retro ’80s, synth-pop vibe. Unisex includes other collaborations with Wisin y Yandel, Zion y Lennox, and Jay Wheeler, to name a few, and previously-released tracks “Pa’nama” and “Feeling,” among others. Stream and listen to it below. — JESSICA ROIZ

Ozuna flaunts his half-Dominican side on his new single, embracing a bachata sound with the renowned artist Anthony Santos (“El Mayimbe de la Bachata”). He describes this collaboration as one of the most important of his career, representing the musical roots that he grew up with.  This new single highlights the essence, passion, and sentiment of the Dominican Republic’s iconic genre. “Señor Juez” describes the guilt and pain that come from losing love forever, as the lyrics unleash an intense exchange of blame between the two singers. — INGRID FAJARDO

After dabbling in hip-hop with “Qué Maldición,” their collaboration with Snoop Dogg, Banda MS is back for more. This time, they’ve teamed up with Mexican rapper Santa Fe Klan to deliver “Dos Mundos,” a hip-hop-laden track powered by traditional banda brand instruments such as the tuba and trumpets. The track at its core is a love song with a message of unity. “Two world and one love, one same version, colors don’t matter,” they sing. — GRISELDA FLORES

After teaming up with Piso 21 and Myke Towers, to name a few, Micro TDH now joins forces with Pablo Alborán for “El Lobby.” A romantic pop song where the artists harmonize their singing and rapping voices, respectively, over a soulful electric guitar weep, “El Lobby” is about love and nostalgia. “I see it as a fleeting, ephemeral experience, which in the end it is not known if it was real,” Micro TDH describes in a statement. “It’s about meeting a person and having an idyllic moment with them and at some point, when you wake up, that person is not there, and it’s like it never happened.” The music video was filmed in Mexico City by director Laura Martinova and features both the Venezuelan rapper and Spanish crooner. — J.R.

Danna Paola and Mau y Ricky join forces to release their new single “Cachito,” a pop-urban song that mixes the melodic higher register of Paola with the unique style that defines the Venezuelan duo. The sensual story speaks of the moments in which the memories, smells, and promises remain after the passion. “Take a piece of my heart/ Your shirt with my smell/ So that I hug you every night/ Take away the memory of those days/ The beach and the villa/ And what we promised last night,” she sings in the chorus. “Cachito” was penned by Danna Paola, Mau y Ricky, Pablo Martin, Juan Morelli, Jon Leone, Freddy Montalvo, and José Carlos and produced by JonTheProducer and Produced by JonTheProducer and Súbelo Neo. — I.F.

A reflective Pepe Aguilar serenades fans with his new banda anthem “El Anticuado,” where he embraces and honors his humble roots, hard work, and sincerity. Co-written and produced by Aguilar and Edén Muñoz, he sings “now everyone wants everything easily, sincere people are rare, no one cares how you feel as long as you look good on the outside … but the good stuff never expires because not everyone can make it.” Aguilar elaborated on the meaning behind his ultra-personal track writing on social media: “Traditions, talent, and values never expire. Call me antiquated, but when I wrote this song at the rancho, I wanted to express the pride I feel for my roots, the type of love that never goes out of style.” — G.F.

Argentine trap artist Khea is out to show the world his versatility one track at a time. This time, following his cumbia, bachata, and rock experiments, he brings “Bien Chula,” a sugary reggaetón-pop track, with a hint of perreo, helmed by producers Honeyboos and NOBEAT. “Bien Chula,” which loosely translates to “very beautiful,” is an ode to women around the world and their natural beauty. The music, filmed by Rocío Gastaldi in Buenos Aires, Argentina, shows all types of women dancing to the song. He also pays tribute to his Argentinean flag by keeping the visuals blue and white. His patriotism comes out to play in the final scene, where the words “Argentina en la casa” can be seen on his chest. — J.R.

Mike Bahia reels in Guaynaa and Ñejo to recreate the heartbreak 90’s classic “Traición Mexicana,” from La Zimbabwe, — while adding his special touch, and distinctly 2021 sounds, with the help of producers Mauricio Rengifo and Andres Torres. The song starts with Mike’s acoustic guitar and his deeply felt vocals followed, by the sound of a beer opening (to help drown the sorrows), followed by bumping beats fused with Guaynaa and Ñejo’s rapping. The video tells the story of a heartbroken Mike reaching out to his collaborators for advice. Both Guaynaa and Ñejo try to fill him with good energy, a little partying, and the funniest plan to get Mike’s pets back. “But tonight I’ll go out to get drunk/ Ay, I don’t know what you did to me, that I can’t leave you/ And all the kisses you gave me came to kill me/ A love as big as the sea, and I’m about to drown/ I am going to drink tequila for each lie,” he sings. — I.F.

Reeling in Dominican artist Alex Bueno and Puerto Rican salsa star Gilberto Santa Rosa, Elvis Crespo presents “Lluvia y Samba.” Co-produced by Crespo, Francisco Barbosa, Manuel Tejeda, and Robert Cora, the infectious merengue song starts and ends with samba and Bossa Nova melodies, bringing to life a global explosion of rhythms. Comparing his emotions to that of a rainy day, all three artists sing about feeling empty after a heartbreak. “I respect and admire both of them,” Crespo said in a statement. “When Alex sent me the recording of him for the first time, I cried like a little boy. As a composer, that a performer with such a great voice and musical conscience took over a song written by me, made me feel very happy. On the other hand, Gilberto Santa Rosa was part of my ‘wish list’, I have admired him since I was a teenager, the greatness of his presence, chivalry, impressive talent, and energy that he brought to the song has been something incomparable. It is a guaranteed success.” — J.R.

Earlier this year, Mexican R&B singer-songwriter Georgel released his EP titled Claro (Clear), featuring cheerful tunes and infused with a happy-go-lucky attitude. Now, he’s dropped a new EP. Oscuro (Dark), making it the perfect home for his new single (which serves as the EP’s focus track), titled “Supersad.” The song sees Georgel teaming up with Colombian rockeros Diamante Eléctrico and pop artist Marco Mares, who’s up for best new artist at the Latin Grammys. The soulful track, finds the artists questioning what went wrong in a relationship. “You always want to see me act like a superstar, and now that I’m super sad you don’t want to know about me,” they sing. — G.F.