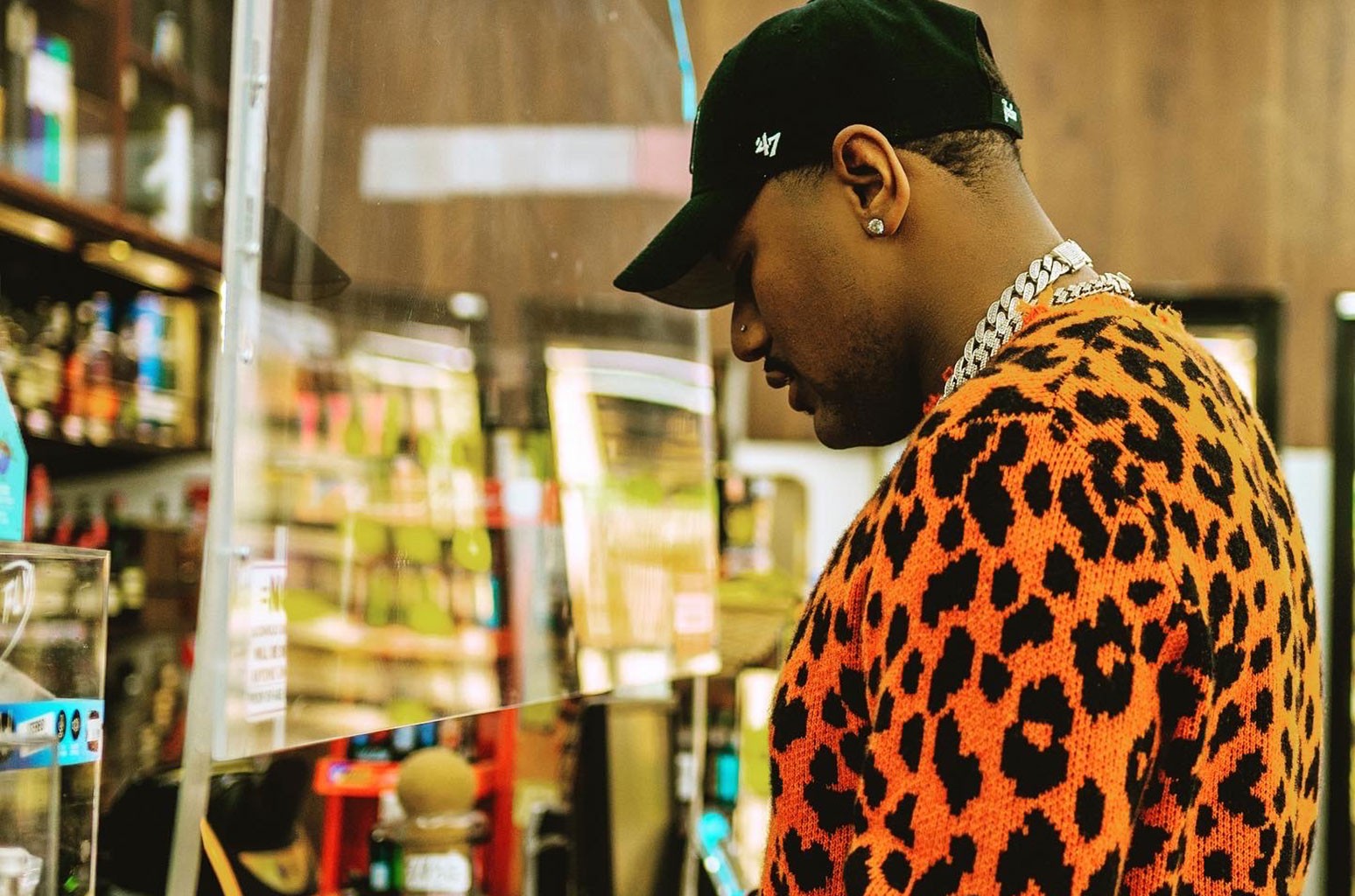 If there’s anyone who knows firsthand that life can completely change in just one year, it’s Derrick Milano.

The last time Billboard caught up with the multifaceted artist last year, he was a hopeful rising star who did most of his work behind the scenes for other artists through songwriting, curation, and everything in between. Fast forward to today, Milano has a Grammy win under his belt (for his work on Megan Thee Stallion and Beyonce’s “Savage (Remix)”), credits in Nas’ 2021 album King’s Disease II, his dream deal with Epic Records, and more confidence than ever before.

“Of course the Grammy win was a huge deal and it’s an honor to have — but the biggest moment, honestly, was me signing my deal,” he tells Billboard when speaking about his most meaningful career win so far. “As a kid, that’s just something I’ve dreamed about my whole life. I remember going on Twitter and tweeting all the A&R’s and executives like, ‘Sign me, sign me. Hot 15-year-old artist!’ People later on would always tell me I would need the numbers and the social media fame and all this and that. When I put pen to paper, I felt like I made it.”

As he now switches gears and walks out from behind the scenes and into the spotlight as an artist, Milano knows he has something to prove. His forthcoming debut project is well underway, and fans have already received two singles from it, “die4iT” and “Control” featuring Ty Dolla $ign.

Derrick Milano recently stopped by Billboard to talk about the two aforementioned singles, why he signed to Epic Records, why he feels women deserve more seats in the industry, and much more. Read the full conversation below.

How have you been since the last time we caught up?

I’ve been great, and really focused. I’ve been trying to appreciate my accomplishments because you know how sometimes that’s hard to do when you have so much going on. I’ve also been realizing who I am, my purpose as an artist, and what I’m really doing this for.

After that soul searching, what would you say is your purpose in this game? Have you figured that out or is it still a journey?

Yes, it’s actually crystal clear to me. I really am here to be a people person and a community builder. Somebody who really is a positive activist where I truly help people — give game, gems, and just put people in positions to better their lives and better their mindset. You can do so much in music by being great at music itself, but you can also miss out on so much by not being a people person and having that real connection with people. It feels good when people tell me they like what I’m doing this for and how I carry myself. I got the music side on lock, and now I gotta tap in more personally with my relationships.

Every time you or someone speaks about how a certain collaboration with you happened, whether it be with a newer artist or a legend like Nas, it’s always the same type of origin story: word of mouth. Someone is speaking highly of you, and then recommends working with you. What quality about you do you think is the reason people enjoy working with you so much?

I’m just a real person, and I’m not a yes man. I truly love the process of creating, especially now on the artist side of it because now I’m able to bring other artists into my world. People will say things like, “Wow, I’ve never heard this person sound like this until they got on a song with you.” A lot of creatives who have done that are like the Pharrell’s, where they just come in and are like, “Not only am I a producer and songwriter, I’m also an artist, too. This is the sound I’m on.”

They trust my sound because I’ve done it multiple times by now. The people I work with, they’re like, “I trust you. I know you’re not going to have me out here looking corny, I know you’re not going to put me on something that can hurt my career.” I think that’s what artists really appreciate instead of giving them something that they’re used to. Let me bring you into my world and show you who I’m working with because all of our ears are different. That’s what makes it a little more fun with me in the studio, because I’m not a “by the book” person. If the hook isn’t where it’s supposed to be traditionally, it’s like, “Well shoot, let’s just keep going.” If the 808 is a little off? Man, let it be a little off.

With all of your accomplishments, I’m sure there were several labels knocking at your door. What about Epic Records made them the right choice for you?

I had a really strong relationship with Jermain Pegues and Jennifer Goicoechea, both my A&R’s over there, and also Ezekiel Lewis. I always wanted to go somewhere that felt like home because they believed in me and saw the come up. Making that jump in the public eye, people may think like, “Oh he’s just a songwriter.”

My people at Epic saw me as an artist, then songwriter, then an artist again, so it hits a little different because they watched the journey. A lot of the other labels didn’t see that side, and they were focused more on what I did as a songwriter — so they may not know how to market a creative like me. I’m a little different — I like to rap, I like to sing, I like to change my voice, I like different ad-libs and pockets. I feel like Epic Records was really the one that was going to let me be me and be able to grow and expand.

Picking “die4iT” as your first single from the forthcoming project was an important decision since it’s your debut as a signed artist. Why this song specifically?

I’m glad you asked that, because I had the moment after I ate an edible and it put me in the headspace to want to listen to my music. I was listening to the hits, and listening to the ones that I knew were going to work. It kind of turned me off a little bit, because I was like, “Is this really going to show off my abilities, or just show I know how to make a good song?”

So when I did “Die4it,” I was thinking — a lot of people’s music isn’t being shed on the right thing. It has three stories to it. One is just about being smart when moving around and being cautious about where you’re putting yourself in situations. The next is me putting my life on the line for a girl who’s in a relationship and she’s not really happy, he’s not letting her go, but I’m like, “I said what I said. I’ma treat you better and if it goes there, I’m taking whatever comes with it.” And lastly, it speaks on protecting women. As men, we just gotta do better. I wanted women to think about who they’re really with and think about if they’re really willing to risk it so they can know their worth and know the power they have.

I also wanted to show my ability in production, songwriting, my range — me being able to go up, go down, my raspy voice, and just put everything in one. Also, I didn’t want a feature on my first single because I wanted to be introduced as Derrick Milano. When the features do come, they know they were a fan of my music to jump on that and it’s not forced.

Speaking of that, and the emphasis you put on respecting women, a tweet of yours floated onto my timeline the other day. You said, “Major labels should hire more women A&Rs in their buildings.” Was there something specific that happened that made you tweet that?

When I was trying to pick songs for my album, I was playing them for women. Whether it was women I met on Clubhouse, women who are choreographers, women who are into all the nightlife — every time I played certain records, they would pick them. So that’s how I just know those are the ones that go.

Also, a lot of my biggest accomplishments were because of women. Sammye Scott at Means Street Studio was able to give me my first placement for songwriting, and that was huge for me. Karla Karim, who was at APG, gave me the opportunity to work on the “Savage (Remix),” because she linked me up with her husband. Nicki Minaj with “Hot Girl Summer,” and just the fact that she told me I’m really an artist. One of the people on my management team, Carmen Murray, she’s done so much for me and she just knows music so well.

I was just thinking about it, and there’s a lot of women who have done a lot for a lot of men and people in music in general. They need to have more seats. We need to come together and find a way to really do that. I would love to see an all-woman label. I would love to see women coming together to make the most popular playlist in the world.

You’ve come a long way since those days of passing out your CD on campus along with all the other stories you told me in our first interview.

I’ve done everything from being a host, a DJ, a promoter, a photographer, and it just goes down the list of a true come up story. It just shows people that it’s possible. Going back to my first statement about my purpose, I just want to be a vessel and show people that you could do it. People need to see that real story in front of their face.