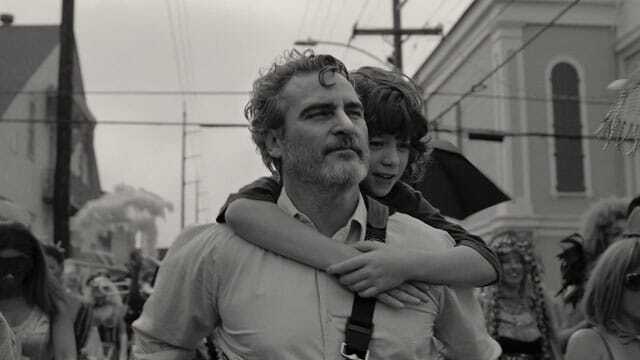 C’mon C’mon is Mike Mills’s latest feature that deals with the pressure and wonder that comes when looking forward to the future as well as dealing with familial relationships. The story may not have conventional structure of normal movies, but it is a movie to take in with feeling. The film is led by strong, potentially Oscar-contending performances from Joaquin Phoenix, Gaby Hoffman, and relative newcomer Woody Norman.

The narrative centers around Johnny (Phoenix) who is a radio journalist traveling around the United States interviewing children about their lives and what they picture the future will be like. While in Detroit, he reaches out to his sister, Viv (Hoffman) who hasn’t spoken to him since the death of their mother. She mentions that she must go to Oakland to help tend to her husband Paul (Scoot McNairy) who has taken a new job while dealing with mental illness. She says she cannot take her son Jesse with her, and Johnny offers to watch him while she’s away. Viv’s stay in Oakland gets extended which leads Johnny to take on the responsibility of caring for his nephew as he travels to New York and New Orleans for his current assignment. Jesse’s inquisitive and overstimulated personality forces Johnny to reflect on his own life.

There are many artistic and stylistic choices to this film that really add to the experience. The most obvious is that this film is presented in black and white which gives it a comfortable feel. To compliment the monochrome, Mike Mills has a piano score from Aaron and Bryce Dessner that doesn’t make the stakes feel too incredibly high and gives the film a relaxing atmosphere. Third, throughout the film, there are cuts of Phoenix and co-star Molly Webster interviewing children in the cities they visit. This paints a picture for the audience of the different perspectives and responsibilities that kids around the country take on. This is a great compliment to Woody Norman’s performance because he has a wild sense of awareness for someone his age and even though he lets on little by little that he understands what’s going on with his mother and father, he doesn’t know how to articulate those feelings.

This is Joaquin Phoenix’s first feature film role since Joker, in which he delivered a phenomenal Academy Award winning performance. In C’mon C’mon, he delivers one of his most nuanced. His character Johnny is dealing with so many different things in his life such as having a falling out with his sister over her relationship with her husband and their mother’s death. He is also dealing with ending a relationship with someone he loved. The way he has to face these ordeals when being questioned by Jesse (Norman) forces him to try to give an answer appropriate for a child while also making him face it internally long after the fact. This appears to be a stroke of genius by Mike Mills because it forces his main character to finally face his past and reconnect with family by looking after his adolescent nephew.

C’mon C’mon is a film that provides laughs but also lets its audience know that it’s okay to not be okay sometimes and has movie-goers leaving the theater feeling refreshed. This film provides a cathartic experience for its viewers with its relatable, well-written story and award-contending performances.