Beyond Good & Evil 2: “game cancellation would only be a matter of time” according to insider 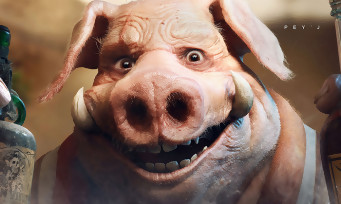 Arlésienne among the Arlésiennes, Beyond Good & Evil 2 is obviously a cursed project. After being announced in 2008, the game sank into oblivion until 2014 when Michel Ancel teased a photo of Jade’s new look on social media. Two years more, in 2016, the French game designer and Ubisoft formalized the pre-production of the game. It was not until E3 2017 to see the new direction taken by this ultra-ambitious sequel. A game which aimed to make us visit several planets of a solar system, each star being an organized open world, a bit like No Man’s Sky. Only here, since the unexpected and hasty departure of Michel Ancel in October 2020, the development seems to be sluggish. Without a captain at the helm, the project does not really know where to go and if we are to believe the words of Tom Henderson, journalist at VGC and IGN, it even seems that production is about to be stopped. The insider goes even further by specifying that the abandonment of the game will be announced shortly, and that it is only a matter of time. Internally, at Ubisoft, Beyond Good & Evil 2 calls itself “Skull & Bones 2.0”, another game whose development also seems chaotic.

Beyond Good & Evil 2 – The game is suffering a development crisis from a lack of creative direction since the title went into development, which was worsened by Michael Ancel’s departure from the studio in September 2020.

Still according to Tom Henserson, Beyond Good & Evil 2 is faced with the new directive taken by Ubisoft, which wishes to standardize its productions, with this desire to move towards game services. The idea is indeed to perpetuate the existence of each title with evolving post-launch content. If this information must be taken with the tweezers of rigor, it is true that the silence around Beyond Good & Evil 2 has something to worry about the players, especially after so much time of waiting while the resurrection was announced there is already 5 years old. We can keep little hope, since Ubisoft Montpellier was looking for a Community Developer history of taking in hand the communication around the game and another unannounced title.