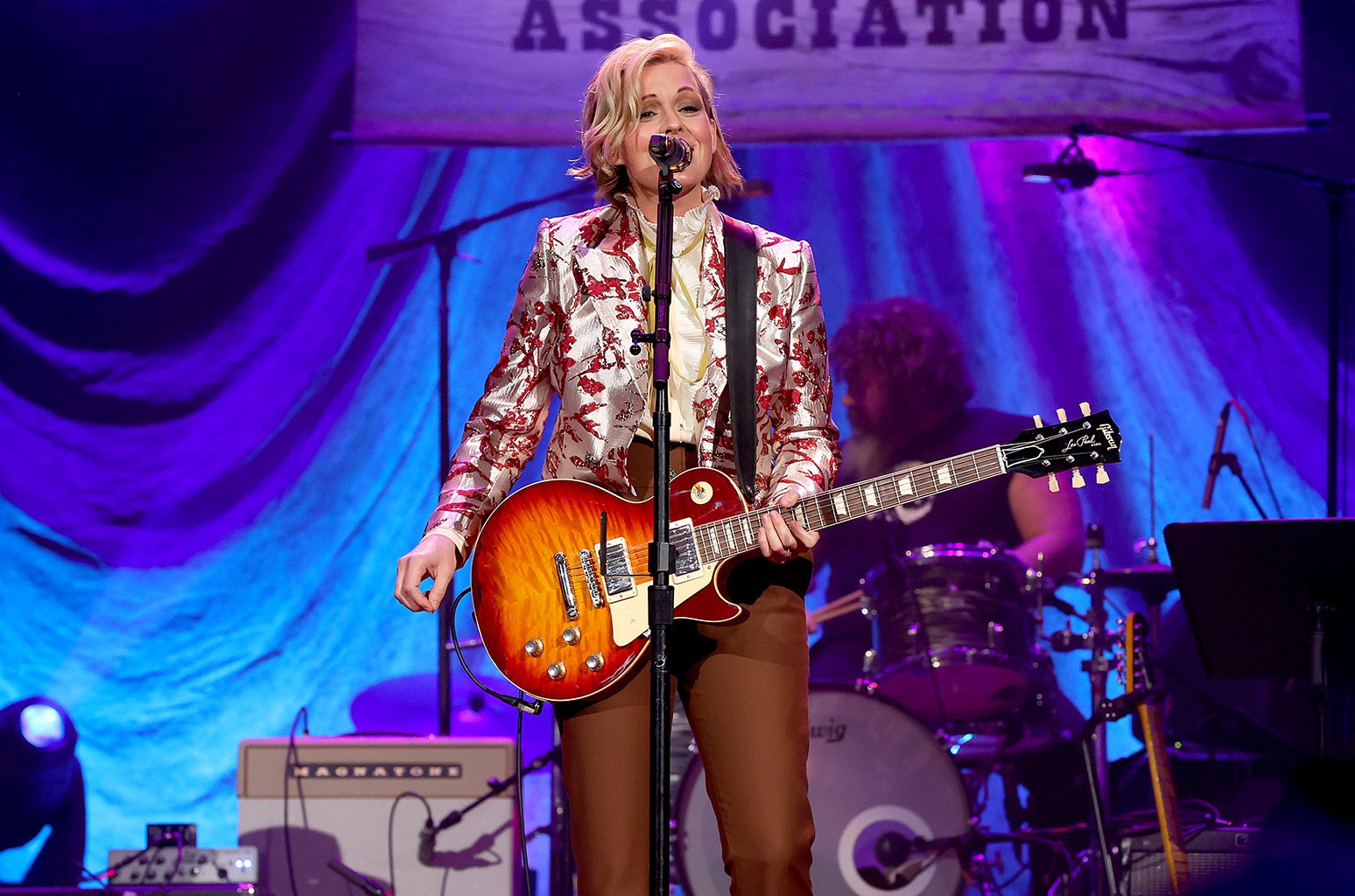 “Man, what a night this is,” exclaimed Brandi Carlile to the fans who filled Carnegie Hall in New York on Saturday (Nov. 5) for her performance of Joni Mitchell’s classic 1971 album Blue. It was an extraordinary concert, recapturing the magic and emotions of an album released five decades ago this year, a work that is “so important to all of us and the great landscape of American music,” Carlile said.

On the eve of Mitchell’s birthday — she turned 78 on Sunday (Nov. 7) — the night was both bold and comforting. Carlile deftly accomplished an artistic high-wire act, faithfully recreating Mitchell’s album live. “I’ve no interest in putting my own spin on it,” she said. Yet she brought her personality to the songs. And who better to take on this homage but Carlile, who has taken up Mitchell’s still brightly burning torch, as one of the finest songwriters and singers of this era.

Carlile conceived this event four years ago. After pleading to be added to the lineup of the two-night 75th birthday tribute to Mitchell in November 2018, and meeting the legendary singer-songwriter backstage, “I remember telling my manager Will [Botwin], “I’m going to do the entire Blue album at Carnegie Hall.” After first performing the album live in Los Angeles in October 2019, she said, “this is the culmination of that dream.”

In pre-recorded comments played before the show, Mitchell joked about her legacy. “Slow and steady wins the race, I guess. I’m so honored that you’re keeping this music alive.”

To the crowd, Carlile said, “I wanted to do Blue so I could share my energy and love with a bunch of folks like you and then collectively we could just pinch ourselves and say, we’re alive in the time of Joni Mitchell.”

Even Mitchell, in the years after Blue, did not always sing in the high soprano range heard on that album. And Carlile’s voice less frequently visits the vocal register of Mitchell’s early works. But that voice is a marvel to behold, with a power and suppleness few can match. Saturday’s show opened with Carlile’s longtime bandmate Tim Hanseroth playing the familiar dulcimer notes of “All I Want.” When Carlile hit the first of many high notes of the evening — “maybe finding some sweet romance with me baby” — the crowd burst into congratulatory applause.

‘The toughest song in rock and roll history’

On first listen, Carlile hated Blue. She recalled when producer T Bone Burnett introduced her to Mitchell’s classic, as the two worked on her 2007 album, The Story. Carlile rejected the opening track, “All I Want” and its playfully loving lyrics. “I was like, nope! Not tough. Very heterosexual. Turn it off.” Some years later, Carlile met activist Catherine Shepherd, whom she married in 2012. Their “very first fight” was over Blue and Carlile’s view that Mitchell was “not very tough.” Shepherd played her “Little Green,” explaining that Mitchell wrote it when, as a then-impoverished folk singer, she gave up her daughter for adoption. She “played me that song and it changed my life,” Carlile said. “It didn’t just change my music, it changed what ‘toughness’ means [for me], what femininity means. I think this is the toughest song in rock and roll history.”

‘My tendency is to sledgehammer’

While Carlile is a marvelous acoustic performer and a star of the Americana genre, she is a rock’n’roll force in live performance. “My tendency is to sledgehammer, you know? To come out here and just be loud and sing loud — but I get into trouble on those high notes,” she told the crowd. Then, preparing for this performance with the Hanseroth twins, Phil and Tim, and with an ensemble of 13 onstage, she came to one song that called for her to “do the Brandi thing.” On “This Flight Tonight,” she and her band cut loose and soared, with a propulsiveness that echoed the dulcimer and acoustic guitar arrangement of Mitchell’s original track.

Embracing the sorrow of Christmas

This December brings the second holiday season since the beginning of the pandemic, which has taken the lives of more than 745,000 in the United States alone — parents, children, spouses, loved ones. Sitting at the piano, Carlile introduced “The River” as a milestone work which, 50 years ago, “redefined the way people look at Christmas music. There needed to be a song that embraces the sorrow of Christmas,” she said. Her sparse piano lines and wish for “a river to skate away on” brought members of the audience to tears.

‘Love can be so sweet’

Carlile’s ensemble included two cellists and two violinists and their playing, atop familiar piano lines, brought a richness to the opening of “The Last Time I Saw Richard,” the final track from Blue. That was a hint of what was to come. As Carlile sang Mitchell’s lyric of an encounter with an ex-lover, challenging his cynicism with hope — “love can be so sweet” — the full band once again surged with energy, bringing the Blue set to a joyous conclusion.

‘Back to the garden’

For an encore, having proven she could faithfully recreate Mitchell’s original works while bringing her own power to these live performances, Carlile chose two of Mitchell’s non-Blue songs, released nearly four decades apart yet thematically linked. On “Woodstock,” she was joined by the singing duo Lucius as she voiced Mitchell’s plea “we’ve got to get ourselves back to the garden.” Then came “Shine,” the title track of Mitchell’s 2007 album, with its lyrics of climate change, runaway technology and failures of political will. “This song is prophecy,” Carlile said. “I wish it weren’t.”

‘She does not abide derivatives’

How could Carlile’s own songwriting not be influenced by her immersion into the work of Joni Mitchell? On her recently released album, In These Silent Days, Carlile surrendered to the urge with the song “You And Me On The Rock.” It was one of the only original songs Carlile sang Saturday night. Written on a dulcimer, and with echoes of Mitchell’s arrangements, alongside the evening’s classics, it more than held its own. But would Mitchell have approved?  “She does not abide derivatives,” Carlile quipped. So she told the crowd she’d decided, “I’m just going to drive up to Joni’s house and play it for her.” So Carlile did. Mitchell’s reaction? “She kind of leans forward and she’s listening, furrowed brow, and she looks at me and says, “Sounds like a hit.’”