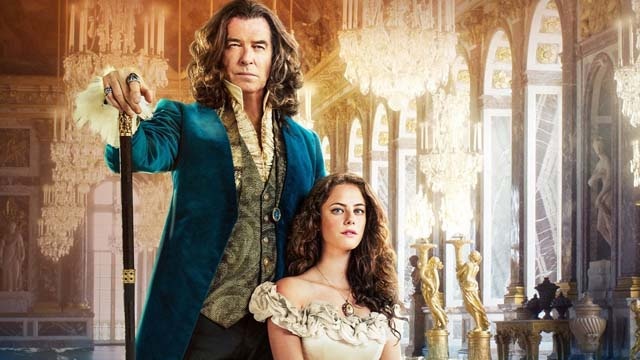 Finally, six and a half years after it was supposed to be initially released The King’s Daughter hit cinemas. Unfortunately, even after the long delay, much of the CGI seems to be unfinished and some sets look to be a part of a stage show rather than a movie. Despite having some big-name actors, namely Pierce Brosnan and William Hurt, this lacks any sort of gusto that would keep the audience engaged.

Directed by Sean McNamara, The King’s Daughter follows King Louis XIV (Brosnan) who is fresh off a victory in a long, expensive war. Louis is feeling loved by the French people but has found himself in dire financial straits due to the war. So, he sends for his daughter (Kaya Scodelario) who has been cloistered away in a coven, where her mother had her and she was raised. He plans to marry her off to someone rich to restore France’s treasury and repay various debts. Throughout all of this, Louis believes that even though France’s finances are depleted, he is the only one fit to lead France forever. In his quest for immortality his in-house scientist (Pablo Schreiber) tells him that they should capture a mermaid and sacrifice it during a solar eclipse for him to achieve eternal life. His priest (Hurt) vehemently opposes this out of fear for the king’s soul. Once captured, the king’s daughter befriends the mermaid (Fan Bingbing) and finds that she has a soul and feels the same way that humans feel. From this point on, she tries to work to ensure her survival.

It’s rather impressive that this was able to get a theatrical release. Typically, a film that is shelved for so long would just be a straight-to-VOD release and be swept up in the countless titles that are available to rent across multiple streaming platforms. But that is probably the most impressive thing about this movie. As the film goes along, one gets the sense that it was edited to remove a lot of scenes. The audience will find itself doubling back to try to remember how and why it got to a certain spot in the film, why a character is able to sneak past guards, and how they figured out where mermaids would be. Also, at some points, it is evident that some of the actors didn’t quite believe in the script they were given because they seemed to just be reading the lines without any emotion.

The King’s Daughter doesn’t get viewers invested in any of the characters. There are many times throughout this film where it wants so badly for this to happen, but it falls short each time. It never gives the viewers a reason to care about what is going on. That could be due to the script not being engaging, or the editing making it feel like the story is not as cohesive as it should be.

The odds for this movie were stacked against it from the beginning. Being shelved for over six years, one would hope they had ironed some things out over time and made it something good. But after seeing it, viewers may wonder why they didn’t keep it on the shelf.

The Yellowstone Universe Has Added Harrison Ford And Helen Mirren As New Prequel Details Are Revealed
17.05.2022 22:30

Sam Asghari Opens Up About How He And Britney Spears Are ‘Moving Forward’ Following Miscarriage After Some Fans Reacted Negatively To New Post
17.05.2022 21:43
Комментарии для сайта Cackle