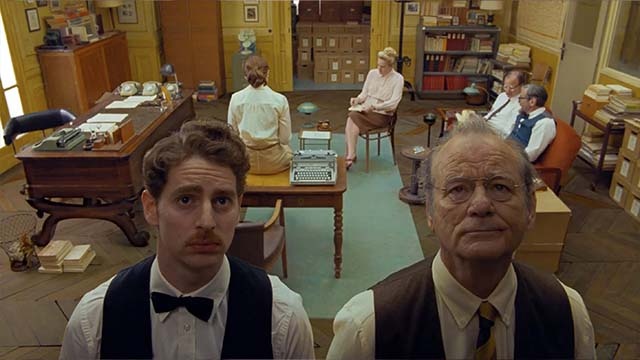 The French Dispatch
Wes Anderson’s The French Dispatch leans inconceivably harder into the style that has become Anderson’s own. Viewers are thrown into a world of pastel and symmetry with a movie that is broken up into four parts. After the death of Arthur Howitzer, Jr. (Bill Murray), the editor of the French Dispatch, a farewell issue is put together to commemorate him. From here, a celebration of journalism occurs; the viewer is taken on a journey of four stories from previous publications. First, Herbsaint Sazerac (Owen Wilson) takes us on a quick tour of Ennui. Then, J.K.L. Berenson (Tilda Swinton) conducts a seminar to tell us about jailed artist Moses Rosenthaler (Benicio Del Toro), whose raise to fame is aided by Julien Cadazio (Adrien Brody) and prison officer Simone (Léa Seydoux). Next, Lucinda Krementz (Frances McDormand) takes to the streets of Ennui to write about the revolution taking place led by Zeffirelli (Timothée Chalamet) and Juliette (Lyna Khoudri). The final part comes from Roebuck Wright (Jeffrey Wright) who is telling his story to talk show host played by Liev Schreiber. His story for the French Dispatch is supposed to be about Lt. Nescaffier (Stephen Park) but ends up turning into a tale that loosely resembles Akira Kurosawa’s classic film, High and Low.

As in all other Wes Anderson’s films to date, The French Dispatch feels just as warm and inviting and he seems to try to convey some social commentary in the subtlest of ways. As in The Grand Budapest Hotel, Anderson also uses the aspect ratio to his advantage here, switching from 4:3 to 16:9 seemingly whenever he willed it. Additionally, something new that is deployed is the switching of black and white to color throughout some of the stories. Upon initial viewing, it can be difficult to catch what exactly is trying to be conveyed with that effect; at times it feels a little aimless, but it does not distract.

Anderson is no stranger to an ensemble cast movies, and this film is by no means an exception. The French Dispatch has many of Anderson’s feature players with Murray, Wilson, Swinton, Brody, and others; there are also many new people joining his cast, including big names such as Chalamet and Del Toro. Fortunately, it comes together wonderfully, with everyone so at home in their respective stories. This is a testament to Anderson as a person and a director. His symmetrical and pastel style never leaves anyone feeling out of place and his dialogue and story telling are so direct that it leaves little wiggle room for the actor to worry about changing the character. Anderson shows himself to be a director who immediately knows whom he is writing his characters for, this appears to bleed over into the performances with the actors neatly swaddled into their roles.

Wes Anderson is one of very few directors whose work is so distinguishable by how his movies look and feel. If one had to describe The French Dispatch, it could be argued that it is the most ‘Wes Anderson’ of all. Going into one of his movies, viewers feel as though they have been wrapped up in a warm blanket and then leave, feeling rejuvenated and refreshed. The French Dispatch is no different.