The 15 IRL Dance Festivals To Hit Before Summer Ends 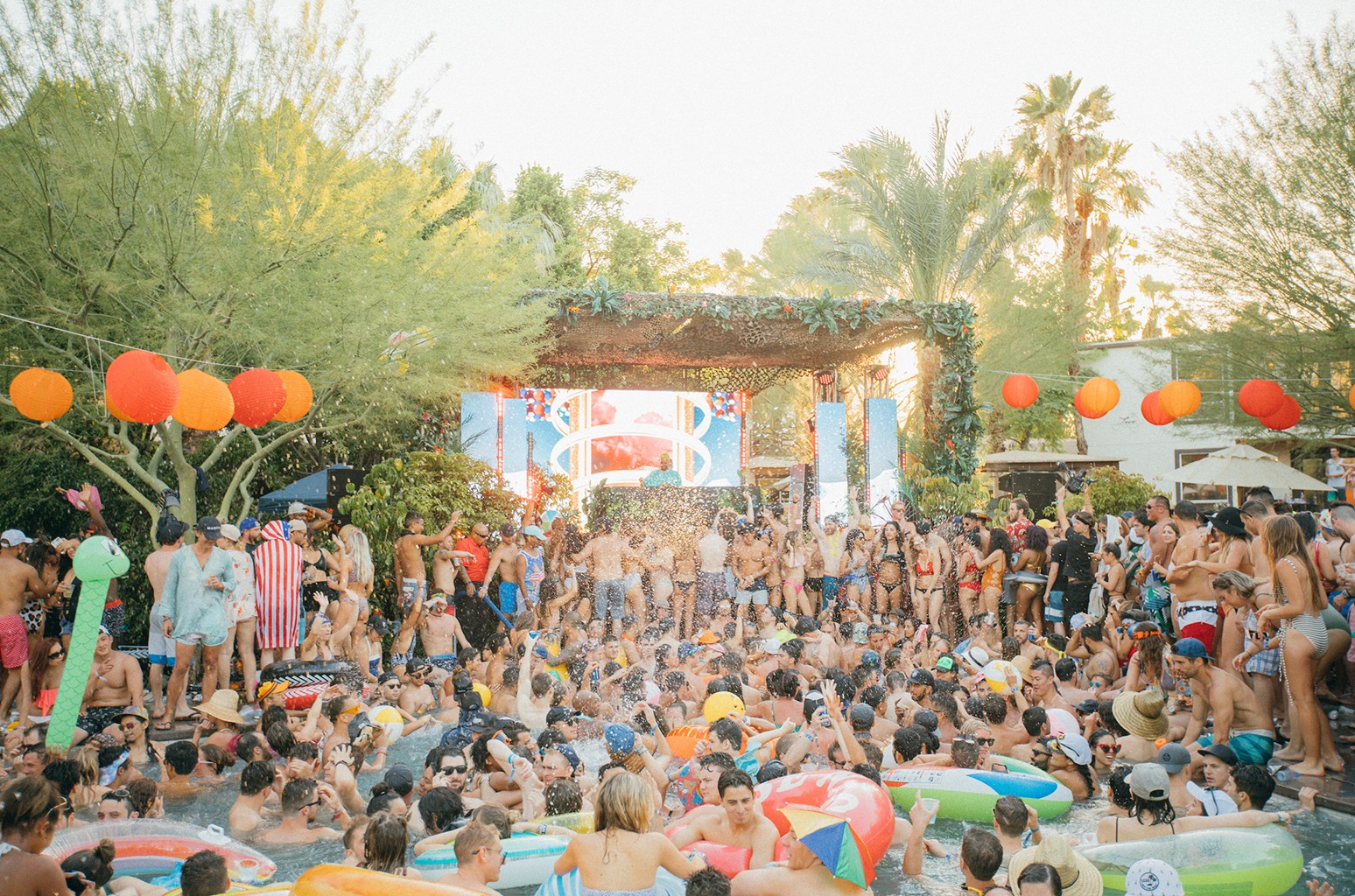 After a year of Zoom raves and Twitch livestreams, real-life dance music events across the United States are making a comeback. Memorial Day Weekend was the first major test: festivals including Orlando’s Skyline and Denver’s SerotonINN Sound Series welcomed physical crowds with open arms, while others like SoCal’s Lightning in a Bottle chose to remain virtual.

Since then, states including California and New York have partially reopened, allowing promoters to hold large-scale events while adhering to health guidelines. But even as gates open, the path forward remains subject to change. This past Saturday (July 16), Los Angeles County reinstated its indoor mask mandate due to a rapid rise of confirmed Covid cases and increased presence of the more transmissable Delta variant.

Meanwhile, over in Europe, regulations regarding both indoor and outdoor gatherings remain tenuous, with Belgium’s Tomorrowland being forced to cancel its August and September events, and EXIT Festival in Serbia becoming the first major European music festival to happen since lockdown.

Complications aside, many dance music gatherings are happening throughout the United States through the rest of the summer. And while the offerings of a single festival season alone can be overwhelming, this year, especially, fans are feeling the need to make up for lost time before summer officially sunsets in September. If you’re one of them, here are 15 coast-to-coast options at which to get your groove back.

For party-hard Southern Californians, summer just hasn’t felt like summer without Hard Summer. Thankfully, the long-running festival is back, though in a new home at San Bernardino’s Nos Events Center.

While Hard has changed its scenery often over the years, its lineup curation remains top-notch. There’s certainly no shortage of headliner-level talent: you’ve got Grammy winner Kaytranada, Skream (who’s going nostalgic with an old-school dubstep set) and Future, whose 2017 hit “Mask Off” caught a philanthropic second wind last year, to name a few.

Where Hard shines most, however, is in its undercard. Look at the smallest-font names of old event flyers and you’ll see some of today’s household names. If that pattern holds, it’s a good omen for emerging acts like Lucati, Godlands, Prospa and Nostalgix.

From the outside, the KTV Karaoke Cafe looks like any other place of business in an Arizona strip mall. On July 23, however, it’s going to become a Jersey club oasis called “10:4.”

Genre pioneer R3ll has partnered with local promoters 8 Giraffes to bring big club energy to the desert: UNiiQU3, hot off her B*****s is Outside Vol 1 mixtape, leads the pack alongside fellow Jersey club heavyweight West End Tricks, Sjayy, Good Trouble, The Oshi and local talent. The night promises, in addition to Jersey club, sounds ranging from bass and hip-hop to house and techno — though the thought of a karaoke pre-game sounds pretty enticing, too.

At Global Dance Festival, you could well be dancing on top of the world. Its grounds, located just outside Mile High Stadium — home to the Denver Broncos — stand 5,280 feet above sea level. That’s approximately 1,056 rave totems tall, or 856 Tiëstos.

GDF is celebrating its 15th anniversary this year with a stacked weekender showcasing all sounds bass and house. Future bass? Check out a triple team-up from Illenium, Said the Sky and Dabin. Wubs so big your legs become jello? Doctor P is going back-to-back with Funtcase. Count on DJs like Green Velvet and John Summit to deliver non-stop grooves while Kaskade and Eli & Fur’s emotional melodic house brings out feelings you didn’t even know you had.

“Get ready for the wildest hippy commune to take over New York,” the elrow collective writes ahead of their latest event, the aptly titled Psychedrowlic Trip. After a long hiatus, the Spanish events brand is trekking overseas and re-staking its claim in the States with a ‘60s-inspired party at Avant Gardner’s outdoor space, Brooklyn Mirage.

Across 10 hours, the event will host DJ greats like Todd Terry (who’s playing house classics) and Dennis Ferrer, as well as Euro heavyweights Josh Butler, Huxley and Paco Osuna. Inside, in King’s Hall, SoCal’s Desert Hearts stages its own takeover with Mikey Lion and friends.

Elrow is known for its immersive decor, so Psychedrowlic Trip will presumably look like a trip back in time. Plus, they encourage attendees to dress to theme, so bust out those bell-bottoms, fringe vests and tie-dye everything.

Partying is fun, but partying is tiring, especially if you’ve been out of practice for 16 months. Wouldn’t it be nice to party… while also relaxing? Palm Springs’ Splash House is made for your inner-retiree.

The mini-festival takes place across three hotel resorts with each boasting a poolside stage, so feel free to dance, splash around or soak up some rays on the nearest chaise lounge. The desert setting will make for some breath-taking views come sunset, and though that’s when the festival technically calls it a day, the party rolls on at the nearby Air Museum until early morning.

Best of all: when you inevitably wake up hungover, you can still watch the action from your hotel room balcony until you’re ready to join the party. Splash House takes place over two weekends with two different lineups, so choose wisely — or choose both.

Let the bass canyon kick it. (Sorry, it had to be done.) When bass music’s at its best and loudest, you become one with its vibration, a feeling so deep and intense that you feel you might explode. But what if bass music was so heavy it actually split the earth?

Excision’s Bass Canyon festival takes place at the beloved Gorge Amphitheatre, which overlooks the natural chasm that is the Columbia River. This wondrous vista is the backdrop to three days of bass, soundtracked by some of the genre’s biggest and brightest names such as Ray Volpe, Eptic, 12th Planet and Svdden Death.

Excision is billed for not just one but three sets across the long weekend, including his boundary-pushing “detox” set and a back-to-back with Illenium. Camping — or glamping, if that’s more your style — under the stars is a huge bonus.

Over 6,000 miles separate Los Angeles from Ibiza, but part of the White Isle is once again dropping right into the heart of the city, no 15-hour flight required. Jamie Jones’ Paradise party, one of the island’s popular summer residencies, is trading in its superclub digs for Downtown LA’s Pershing Square, a small but lush public park surrounded by skyscrapers. (It’s also extremely accessible by public transportation.)

Jones will headline the night with support from Art Department, Detleft, Yulia Niko and a surprise special guest. With custom lighting and production promised, it’s a rare local opportunity to see underground-leaning house, techno and tech house music done big outside of a traditional club or festival environment.

Over the past decade, Los Angeles collective Brownies & Lemonade have grown from throwing one-off shows to curating stages at major festivals. A festival of their own is a natural evolution. After experimenting last year with their Digital Mirage virtual festivals (in partnership with Proximity), B&L are finally taking their festival chops IRL to Arizona’s Lake Havasu. Baauer, YehMe2, Vindata, Snakehips and Moore Kismet are just some of the many names soundtracking what’s sure to be a raucous weekend, complete with sunrise sets, daytime lake activities and afterhours bonfires.

After throwing two Secret Sky virtual festivals and releasing his long-awaited new album, Nurture, Porter Robinson is bringing back his IRL music festival Second Sky, last seen back when it debuted in 2019. The lineup is small and eclectic, but full of highlights, from Toro Y Moi and good friend Madeon — “I know that… Nurture would never have existed if it wasn’t for him,” Robinson told Billboard — to unexpected curveball Jon Hopkins. Throw in Japanese math-rock band Jyocho and multi-instrumentalist Jacob Collier, and Second Sky sounds less like a music festival and more like a close friend who’s sharing with you their favorite music — but on a very big budget.

EZoo is going all-out in its return with a full slate of heavyweights including Steve Aoki, Kaskade, Tiësto, Alesso and deadmau5 (as his alter-ego testpilot), but they’ve got a healthy batch of newer names too like Ship Wrek, Westend, Rinzen, Anakim and Pax. Melodic techno, rowdy tech house, flooring bass, heart rate-testing hard dance or just some good old-fashioned big-room: no matter what you’re into, chances are you’ll find it here.

Arc Music Festival is Chicago’s newest multi-day electronic event. Taking inspiration from its host city as the birthplace of house music, it places as much emphasis on dance music’s roots as it does its future: you’ll find scene veterans such as DJ Pierre, Gene Farris, Derrick Carter and DJ Heather alongside modern contemporaries like LA’s Channel Tres, Italy’s Meduza, Australia’s Fisher and the UK’s TSHA — all examples of the culture’s global reach.

Other artist highlights include DJ Holographic, Seth Troxler, The Martinez Brothers and Eric Prydz, the latter of whom will be performing three times under three different aliases throughout the weekend, including as Cirez D for a B2B club set with Adam Beyer and as Pryda for the closing party.

Little by little, the Insomniac universe is expanding like a comic-book film franchise. Back in February, the electronic entertainment brand announced its latest venture, Lost in Dreams, a home for “future bass, melodic dubstep, and vocal-driven dance music.”

In addition to a dedicated record label, Lost in Dreams is also launching as a music festival with more than 40 artists performing across two days, including label artists Crystal Skies, Kaivon, Danny Olson and Highlnd. Add performances from Autograf, Moon Boots, SG Lewis and a whole lot more, and it’s going to be a cute time. Get lost (in dreams), get lifted.

Los Angeles promoters 6am, Synthetik Minds and Dirty Epic have been upholding the city’s rich warehouse rave legacy for a new generation of underground electronic music fans. Put them together like a techno Transformer and you get an event like Reform, a one-day event packed with forward-facing house, techno and experimental music.

Taking over all four rooms of the historic Catch One nightclub, Reform features an all-American lineup including Danny Tenaglia, Josh Wink, Rrose, Lauren Flax, DJ Hyperactive and Truncate. One side-room is dedicated solely to live performances, and another will showcase rising local talent such as Annika Wolfe and Monsieur Frazier. It’s going to get dark, it’s going to get heavy, and it’s going to get weird. (Given that it’s an indoor event, Reform will require masks upon arrival, plus proof of vaccination or a negative COVID-19 test.)

Even in its 11th year, North Coast Music Festival is finding ways to stay fresh. This year, the music festival is moving to a new home at SeatGeek Stadium, where its main stage will be located directly on the main playing field.

With a new home in the woodlands of Georgia’s Chattahoochee Hills, Imagine Music Festival aims to create its own utopia. Led by headliners Excision, Griz, Illenium and Kaskade, there’s a big emphasis on bass-filled B2Bs throughout the lineup: Carnage/Borgore, Virtual Riot/Barely Alive, Adventure Club/Riot Ten.