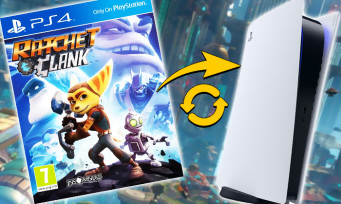 Although backward compatibility with PS4 games exists on PS5, Sony is still far from rivaling that offered at Microsoft, much broader and optimizing almost all titles from the first Xbox to the Xbox One. Nevertheless, the Japanese manufacturer seems to strongly advise its studios to develop patches for certain big exclusives, in order to improve them on PlayStation 5: thus, God of War, Ghost of Tsushima or even Days Gone now run in 4K and 60FPS. .. for the pleasure of our amazed little eyes. Good news, Insomniac Games has just announced that Ratchet & Clank, the remake / reboot released in 2016, will also be entitled to special treatment.

Ratchet & Clank (2016) will be playable in 60 FPS on PS5 after a new update in April! As part of the Play at Home campaign, download the game for free now through 3/31. # RatchetPS4https://t.co/Iw6CMNByFU pic.twitter.com/VEFiW3IMWK

The colorful adventure of our lombax and its tin can therefore be displayed in sixty images per second and always in 4K, this last resolution already being that of the PS4 Pro version (just like HDR). What to make the most of this successful galactic journey – a nice 17/20 in our columns – and to relaunch the hype before the release of the brand new opus on PS5, Rift Apart. And for the record, this one will not be a sequel to the 2016 title but one of the original universe, established with more than ten episodes since 2002.

By the way, we recall that Ratchet & Clank (that of 2016, therefore) is currently available on the PlayStation Store, until March 31. It would still be a shame not to take advantage of it.