Since 2018, we have been happy to work closely alongside Krone to bring drivers in Euro Truck Simulator 2 a range of trailers that leads the market in terms of innovation and quality. From Profi Liner to Box Liner trailers, Krone produces a variety of trailers for jobs large and small. 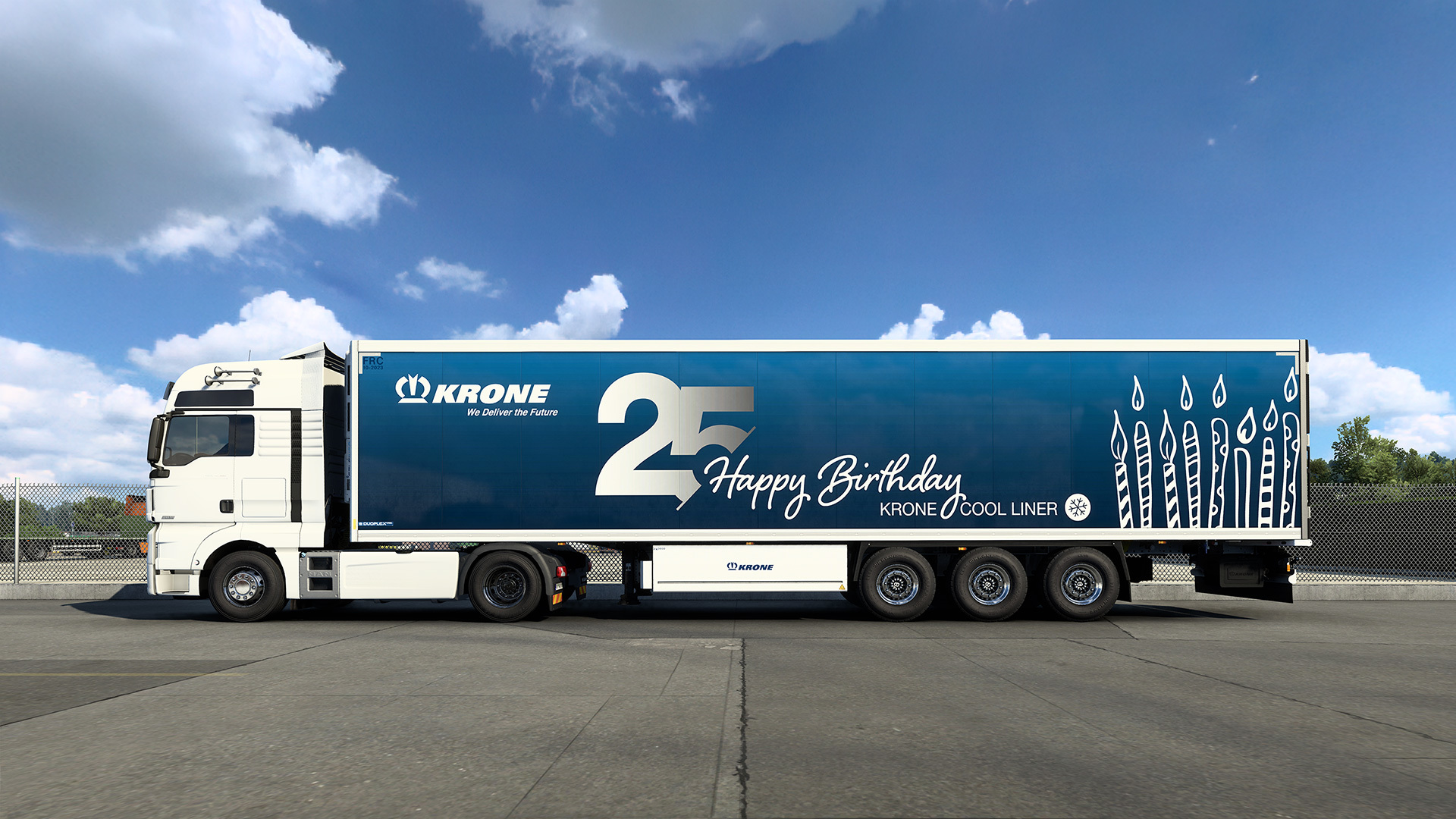 One trailer, however, stands out above the rest! The Cool Liner, which celebrates its 25th birthday this year, is a refrigerated semi-trailer which was first introduced by Krone in 1996 under the product name “Krone-Wabash”. Today, the Cool Liner can now be found with numerous updates including an innovative lighting concept, a new optimized door seal, a redesigned baffle plate, and more. 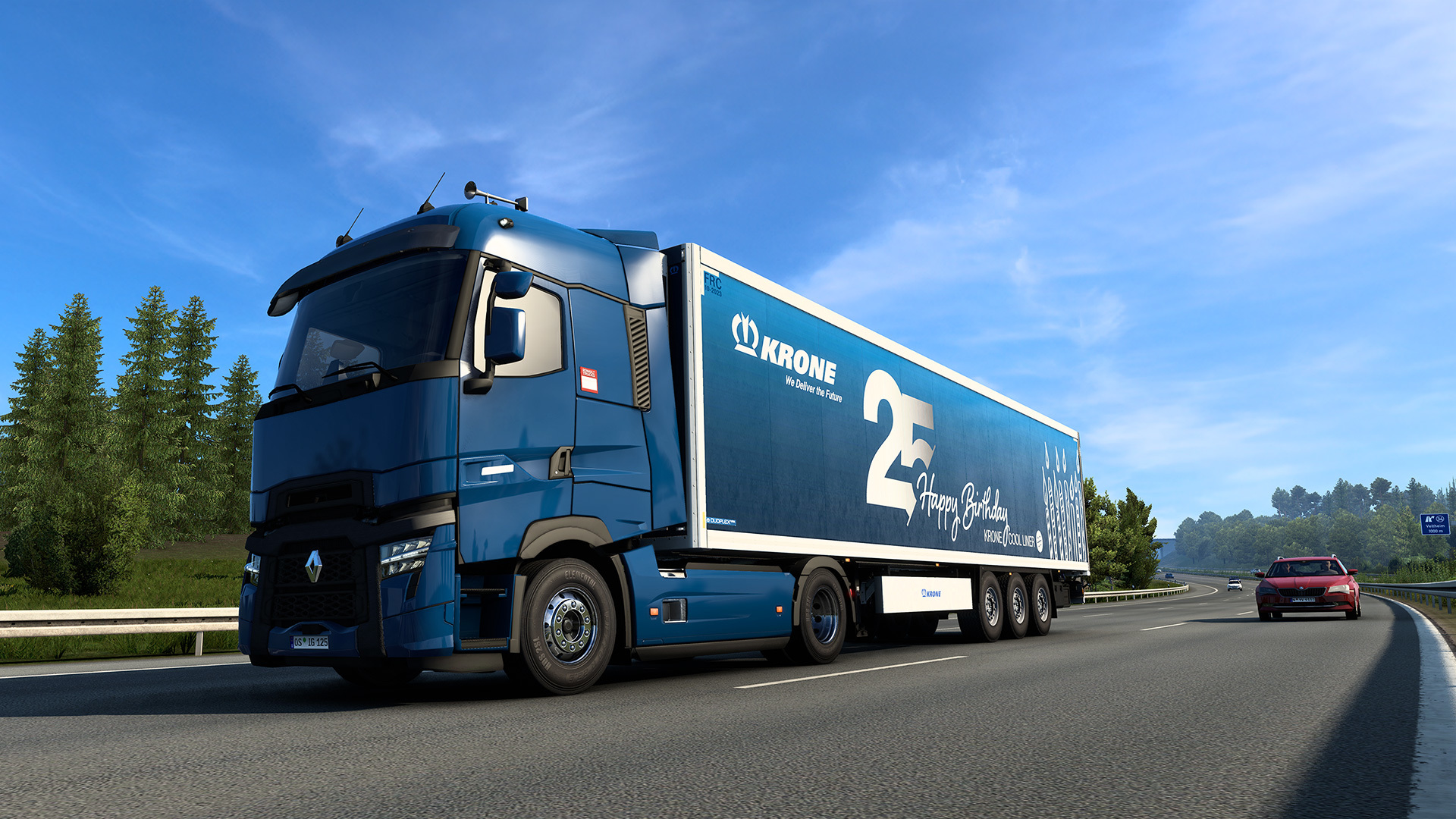 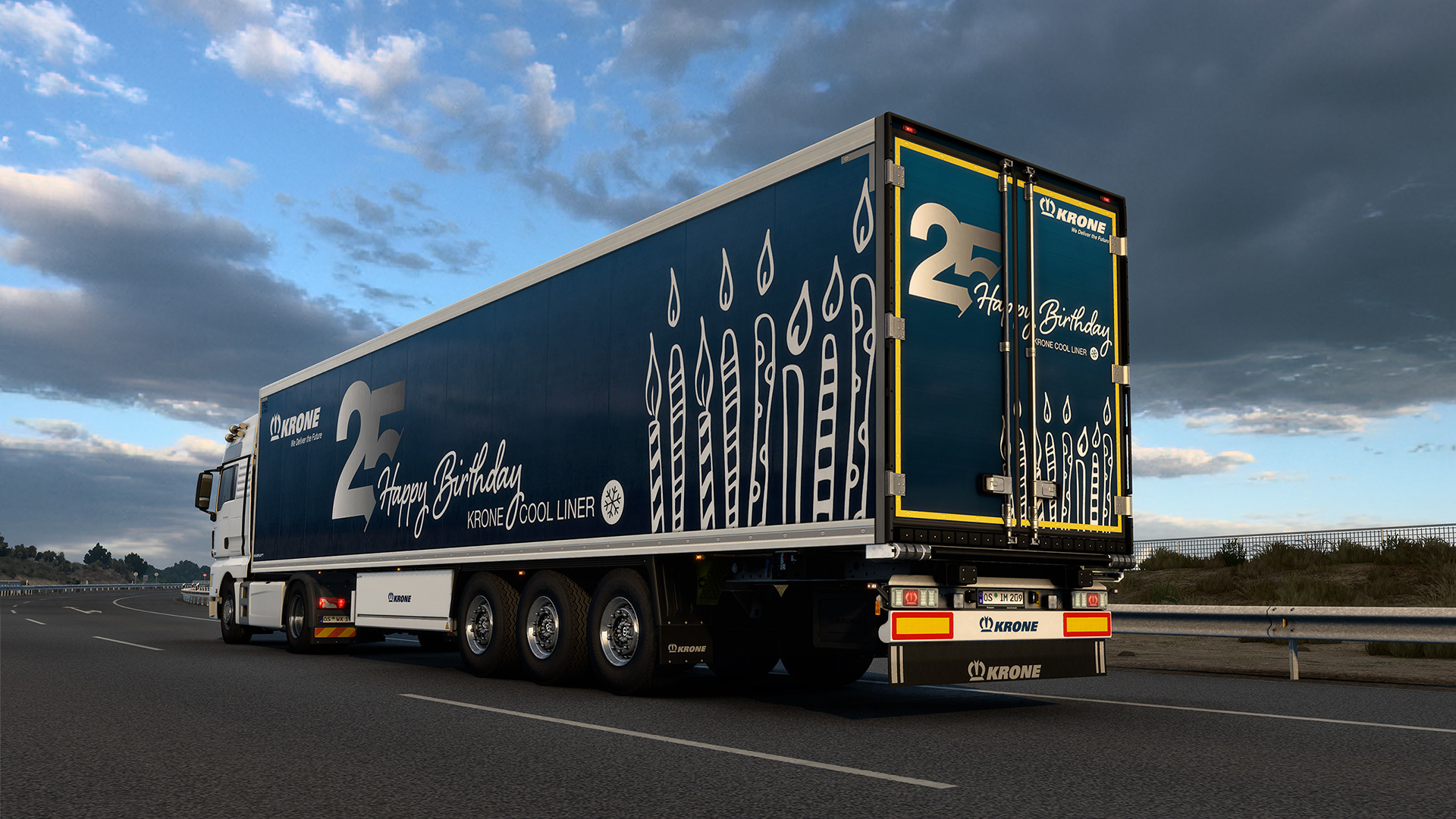 To celebrate this amazing milestone, we have teamed up with Krone to deliver a special “KRONE Cool Liner 25th Anniversary” paint job for the Cool Liner Trailer, which Krone themselves has built in the real world! With this free update, owners of the Krone Trailer Pack DLC for Euro Truck Simulator 2 will also find a new option to add the Celsineo cooling unit for the Cool Liner Trailers. This won’t be all, as we are already planning other equally cool content additions together with our friends over at Krone Trailers for later this year, and also for 2022! 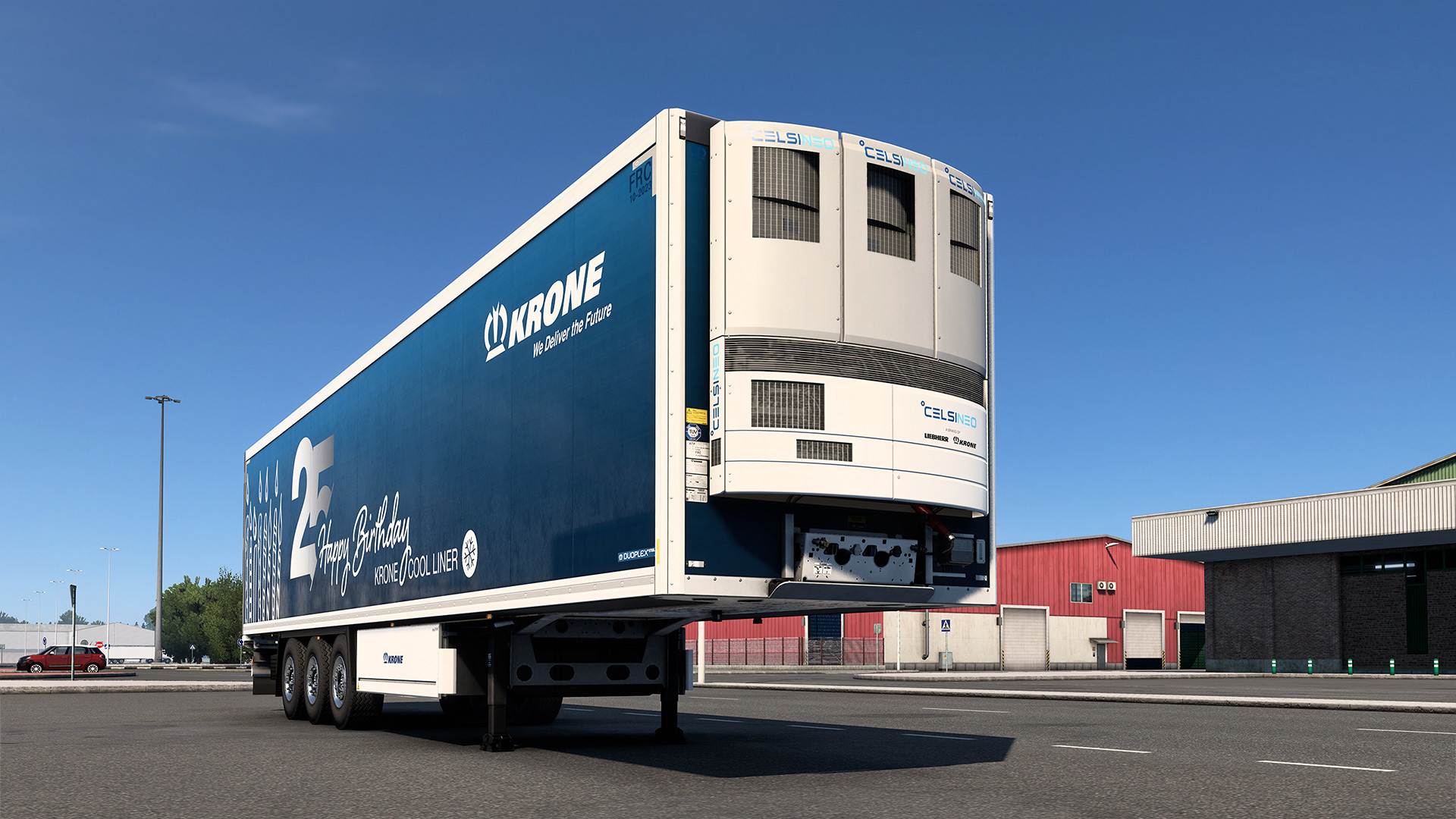 We look forward to seeing you celebrate this special birthday by sharing photos of you hauling a delivery with the 25th Anniversary Krone Cool Liner trailer on Twitter or Instagram using the hashtag #25YearsCoolLiner. Make sure to tag us (@SCSSoftware) and Krone Trailer (@KroneTrailer) on Twitter, Instagram, and Facebook. You will have a chance to win some cool items kindly provided from Krone Trailers’ merchandise shop!

Also, we would love to have you join us this Friday, from 17.00 CEST time on our official Twitch & YouTube channels, where we will host a very special Cool Liner 25 Years Anniversary live stream! Featuring not just our well-known duo of Alex and Nemiro, but also joined by a special VIP guest from Krone Trailers! You can expect an interesting interview to learn more about Krone Trailers, free DLC keys giveaway, and more! 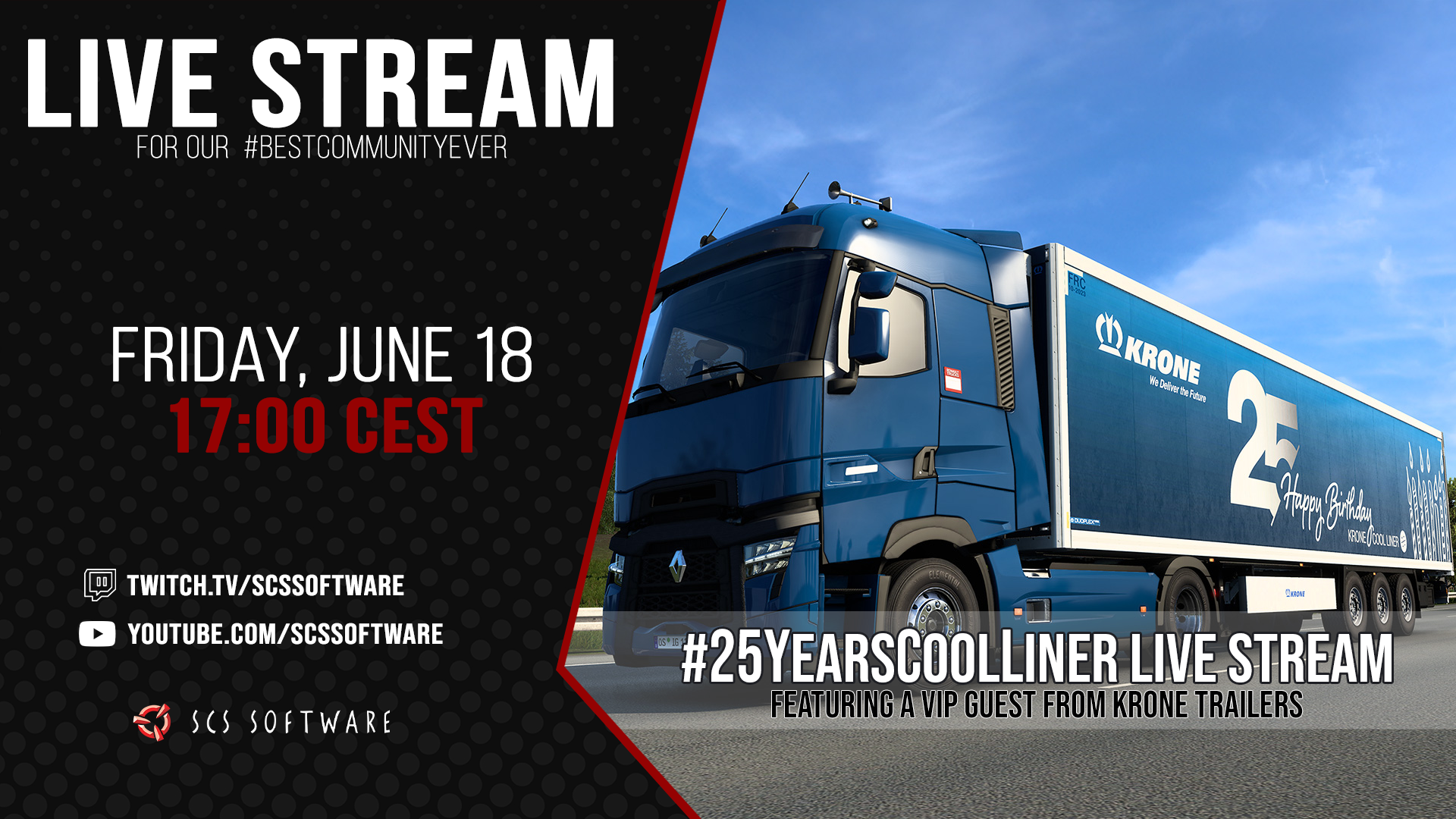