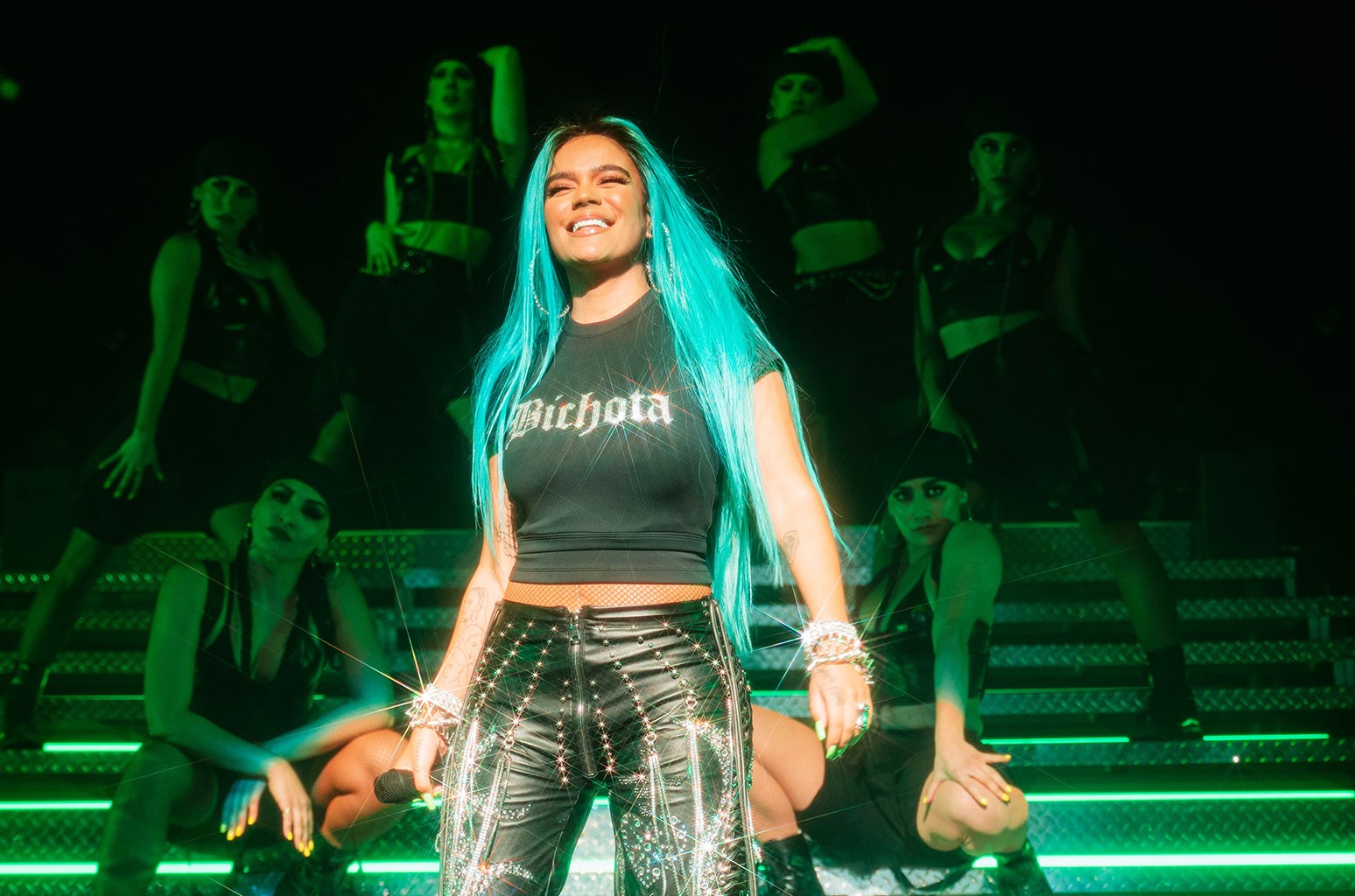 A sea of women flaunting mermaid teal-colored hair made their way into Los Angeles’ Microsoft Theater on Thursday (Nov. 4) to see la verdadera Bichota, a.k.a Karol G, perform a sold-out show. Of course, the hair color trend was a nod to the Colombian artist’s own wavy hairstyle that makes her hard to miss.

Also unmissable was her show in L.A., where even J Balvin and Grupo Firme‘s Eduin Caz were in attendance. After kicking off her Bichota Tour — Karol G’s first-ever U.S. headlining trek — in Denver on Oct. 27, she landed in L.A. to deliver an attitude-heavy performance, serenading fans with back-to-back hits including “Bichota,” El Makinon,” “Location” and “Tusa.”

But before Karol G took the stage, Colombian singer-songwriter Feid was in charge opening the show and hyping up a crowd that included mostly women, though men and kids were also spotted among the fans. Exactly at 8 p.m., Feid took the stage with two DJs in tow to sing “Tengo Fe,” “Chimbita,” “Jordan IV” and one of his latest tracks, “Fumeteo,” among other reggaeton songs.

A little past 9 p.m., a video started playing in anticipation of Karol G’s turn to take the stage, showing her dressed from head to toe in a tiger print jumpsuit and thigh-high boots from designer Roberto Cavalli. In the clip, the 30-year-old artist embarks on an arduous journey to get from point A to point B — point B being her highly anticipated show.

On cue, she appeared onstage no longer wearing tiger print. Instead, she was in rock star mode wearing bedazzled black leather pants and a black crop top with the word “Bichota” written across the shirt in crystal rhinestones. She flashed a warm smile to her thousands of fans.

“I have to be honest, I was so nervous backstage because it’s my first tour. Alone! To get here and see that sold-out sign, there’s no way I can hold back my emotions. I can only feel grateful,” she said. “We all came here to dance, perrear, sing and to cry. Let’s go L.A.”

Below, check out more highlights from Karol G’s concert.

Karol G’s concert was like a spiritual cleanse where you go shake off any self-doubt, give thanks to your past and embrace what’s to come. Sure, we were there for the anthems, but also Karol G’s heartfelt pep talks; for example, she told the crowd that by the end of the night, everyone there would be a “certified bichota (strong woman).” “Sometimes we stay somewhere for too long because you had fun and it was incredible, but we’re not giving ourselves an opportunity,” she told us. “If where you’re at is no longer for you, maybe the future waiting for you is even better.”

Everywhere you turned, there was a Karol G look-alike wearing her merch from head-to-toe and sporting colored hair — even children who stayed up on a school night to meet their idol. While singing “DVD,” Karol stopped to acknowledge a little girl who was at the very front row wearing teal-colored extensions. “Ay no, me muero (I’m dying),” Karol said as she invited her new friend onstage and took photos with her.

“I’ve been waiting a year to sing this song live but I’m sure tonight, we’re not holding back,” she said. It’s safe to say, no one held back. It was the ultimate climax; singing the anthem “Tusa” in unison with Karol G felt surreal. The chart-topping track, which Karol G has said marked a before and after in her career, wrapped up the over one-hour set.

Karol G shared the spotlight with an all-female band and an all-female dance troupe. The band members, rock stars in their own right, accompanied Karol on drums, the piano keyboard and guitars (electric and acoustic). On two occasions, Karol stepped off the stage, giving way to her guitar players’ epic electric guitar and keytar solos.

Before Karol G took the stage, a roaring crowd waved to a mysterious person sitting up top in an elevated area. “Who is it?” “What’s going on?” people asked migrating to the right side of the stage to get a closer look. The two responsible for causing chaos were J Balvin and Eduin Caz, Grupo Firme’s frontman, who waved back at the fans. “Queen,” Balvin captioned a video of Karol G performing on his Instagram stories. Meanwhile, Caz wrote “all my admiration to the Bichota, Karol G.”