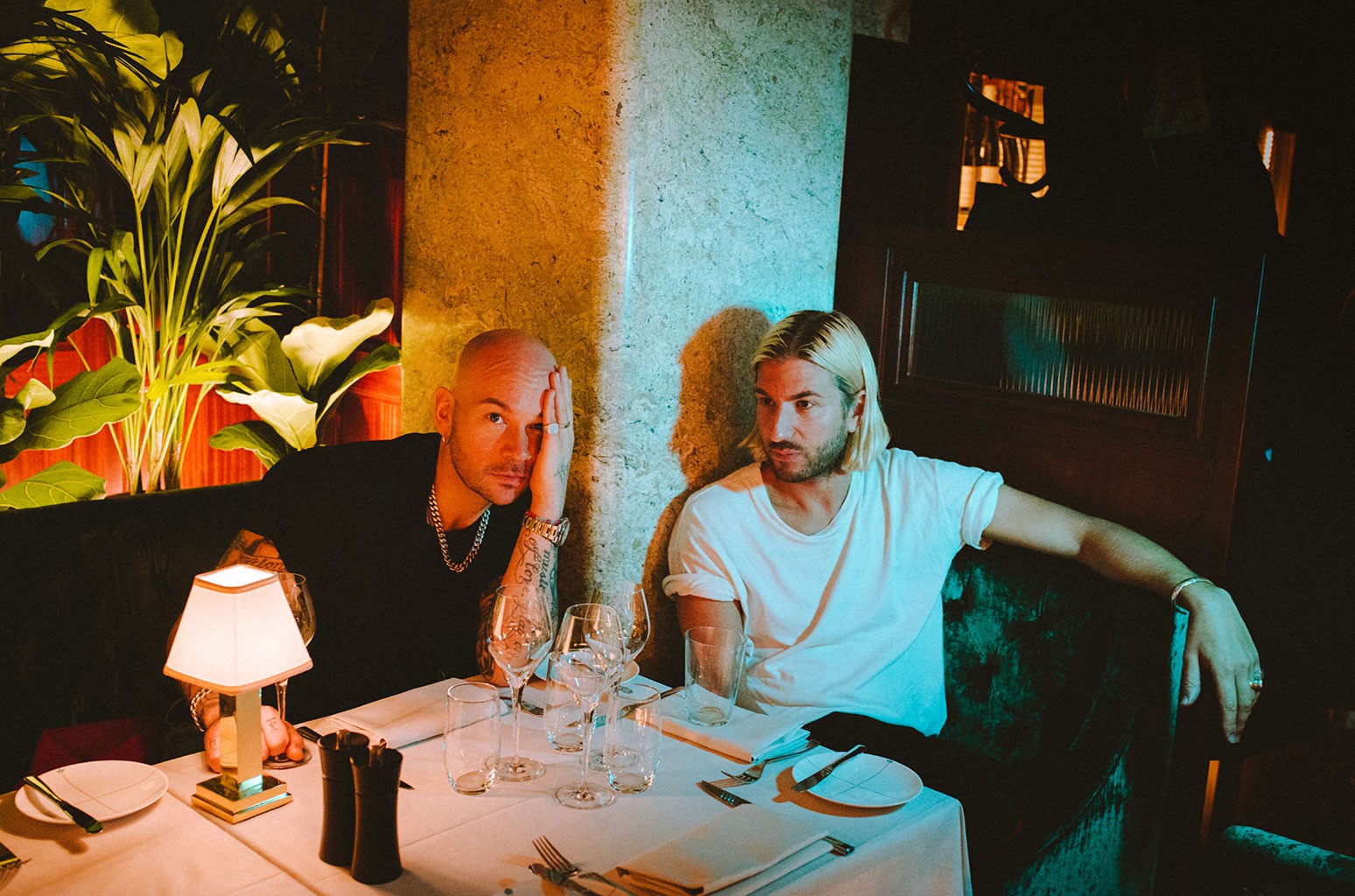 STOCKHOLM —The greatest hit of EDM supergroup Swedish House Mafia’s career started out during a post-hangover hangout session between two new friends still getting to know each other.

Over two Sundays in May of 2010, Swedish singer-songwriters Michel Zitron and John Martin Lindström met up in a Stockholm studio, where they reminisced about their childhoods in Sweden, recalling the places where they first got drunk and found teenage love. And they delved into their relationships with their dads, including Zitron’s father’s religious beliefs.

The resulting song, 2012’s “Don’t You Worry Child” (on which Martin also sings), was transformed by Swedish House Mafia into an era-defining dance track, and the Swedish trio’s highest-charting hit to date, reaching the top 10 of the Billboard Hot 100. It was the last song the act released before disappearing from the music scene for five years, and its release came after the group had already announced their imminent split.

This week Swedish House Mafia is returning with a new single — its first release since the Martin-Zitron collaboration a decade back — and has a new album slated to come out later this year.

While the Swedish House Mafia members tell Billboard that their new music is an intentional departure from the anthemic big room sound that “Don’t You Worry Child” helped define, Zitron and Martin proudly recall the song as an example of the best that the EDM boom had to offer. “We love sad songs with big choruses, and storytelling,” says Zitron. “And that’s what actually made the EDM scene. This is a song where you can cry on the dance floor.”

As the two artists tell it, “Don’t You Worry Child” came from a pure place. Martin and Zitron went to high school together in Stockholm but didn’t know each other, even though they were both performing music by then. Martin was in a rock group and Zitron had been in a boy band. (Zitron recalls Martin, with his trademark flowing locks, “looked like Jesus.”)

More than a decade later, they were introduced by mutual acquaintances in the Stockholm music scene. They found their musical styles at the time – Zitron was writing pop songs and Martin was into indie rock — complemented each other. One Friday afternoon, they went to a liquor store together, bought some beers and listened to music in Zitron’s studio. “And we just like, we fell in love,” Zitron says about the friendship that formed. “That was like my brother.”

They started routinely gathering on Friday afternoons to work on songs. Martin, who helped out at his father’s tire shop, would join Zitron in the studio after his shift. “That was our playground, basically,” Zitron says of the studio. “All our first songs were like Springsteen records. Super personal.”

Then one Sunday afternoon that May of 2010, after a hard night of drinking, they ended up in the studio. They talked about their lives while they picked away at a melody. Zitron opened up about his upbringing in a broken home in the immigrant-heavy Tensta borough of Stockholm; his Finnish mother and religiously devout Finnish-Romani father divorced when he was very young leaving his relationship with his dad “damaged.” The song’s now-iconic chorus — “My father said/ Don’t you worry don’t you worry, child/ See heaven’s got a plan for you” — was something essentially taken verbatim from his father’s words of wisdom.

Meanwhile, Martin, who grew up in the more-affluent south suburbs of Stockholm, was encouraged by his father, a former rally car driver, to pursue a career in motorsports — his dad gave him and his brother motorcross bikes that they later sold to buy electric guitars — or to follow him into the family tire business; he wanted to do music instead. During that hangover session, the guys also talked about young love and the places where they first discovered it, ultimately coming up with the song’s rousing pre-chorus, “Upon a hill across the blue lake/ That’s where I had my first heartbreak.”

On another Sunday later that month, they locked down the lyrics and then recorded a demo, but it was not originally intended for Swedish House Mafia. At the time, Zitron and Martin planned to use it to help launch their own electro-pop indie duo. But in December, while working in a Stockholm’s Cosmos Studio, Zitron corralled Sebastian Ingrosso, one third of Swedish House Mafia — who were starting to taste international success with “One (Your Name)” and “Miami 2 Ibiza”— and played him a few tracks in progress, including the demo for “Don’t You Worry Child.”

Ingrosso returned later in the day, asking Martin and Zitron to take a stab at writing the lyrics and singing on a song he was working on called “Save The World.” They did it in about a day, Zitron recalls, and “Seb loved it.” Then in January of 2011, Ingrosso called Martin and Zitron from a music studio in Los Angeles, where he was with his fellow Swedish House Mafia members, Axwell and Steve Angello. “Dude, can you send me those three songs that you played to me in the studio?” Ingrosso asked, Zitron recalls. About a half-hour later, after they had gotten the music file, Ingrosso phoned back to tell Zitron that Axwell was “lying on the fucking couch, almost crying,”

Zitron says that Ingrosso made a simple demand: “’We need to have this song. It’s gonna be a No. 1. I promise you, man.’ His energy was like, I could feel it through the fucking phone.”

After they handed it over, the song became enmeshed in a famously long production process that revealed personal tensions among the Swedish House Mafia members — as documented in the 2014 documentary, Leave the World Behind. “It was Seb and Ax that in the end took the time to really finish the song,” Martin says.

The group finally released the track in September of 2012, nearly two years after Zitron first played it for Ingrosso. (The song’s live debut came two months earlier, on July 14, 2012, before 60,000 people at Milton Keynes Bowl in the U.K.) The song was a runaway hit, ultimately spending 33 weeks on the Billboard Hot 100, peaking at No. 6.

Swedish House Mafia never changed Martin’s vocal from the original demo. After it was released, Zitron and Ingrosso got matching “Don’t You Worry Child” tattoos on their chests.

For a time, Martin and Zitron rode the EDM wave, DJing themselves at clubs like Pacha in Ibiza. “We got tired of the whole champagne EDM thing,” Zitron says. “When it comes to commercial [music], it just wasn’t fun anymore.”

Zitron and Martin, who are both 40, have gone on to work with artists like Martin Garrix, (“Home,” “Hold On”), David Guetta, Tiësto (“Red Lights”) and Gryffin (“Cry”). And a decade after they put aside their electro-pop duo ambitions, they finally have their own artist project, VCATION, under which they are making 90s house-inspired music. (The first single, tentatively titled “Love You Long Time,” is scheduled for release next month, Zitron says.)

Looking back on “Save the World” and “Don’t You Worry Child,”  Martin recalls the experience as “a strong A&R thing from Seb — finding us, putting us on the track and believing and being brave — because no one had ever heard my voice or my name before.”

“We were just two indie guys that ended up in the EDM world,” Zitron says. “I really looked up to those [Swedish House Mafia] guys so much. For me, it was such a blessing that they wanted a song of ours.”