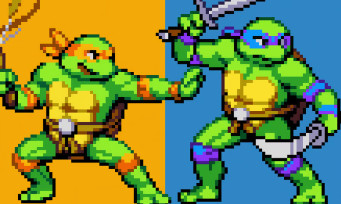 When we interviewed him at the time of the release of Streets of Rage 4, Cyrille Imbert, the boss of Dotemu, had confided his interest in 2D and iconic licenses. He hadn’t told us any stories, since without warning, he and his teams announced almost a month ago Teenage Mutant Ninja Turtles: Shredder’s Revenge, a thinly veiled reference to the iconic Teenage Mutant Ninja Turtles: Turtles in Time released in the 90s for Super Nintendo.

Of course, we jumped at the opportunity to invite him to our daily show 5 News & Rumors a Day. In the company of Maxime, and for about thirty minutes, he returns not only on the genesis of the project, but also on other subjects such as Mark of the Wolves 2. For the record, Teenage Mutant Ninja Turtles: Shredder’s Revenge is planned on Nintendo Switch, Xbox One, Xbox Series X, Xbox Series X, PS4, PS5, and PC.