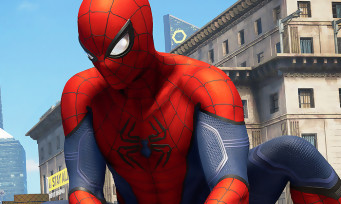 It’s been over 10 days since Marvel’s Avengers ‘Spider-Man’ DLC was announced and with a release date fast approaching (November 30, we remind you), we were seriously starting to wonder when is- what Square Enix was going to show us about gameplay. It is finally through our colleagues at IGN.com that we can finally discover what Spider-Man looks like in-game. If the journalist was able to take the game in hand, the gameplay that is shown is not his, but b-roll provided by the publisher. However, in the preview, we learn that the character plays much like Black Panther, with a range of movements dedicated to melee combat. No wonder, knowing that our Spider-Man will also be able to twirl thanks to the webs he can weave. Obviously, this version of Spider-Man made in Crytal Dynamics will be compared to the game from Insomniac Games, which offers faster and more impactful gameplay. You only have to see how Spider-Man walks around the city to understand that there is a certain rigidity in the movements and the animations. Despite this inevitable comparison, IGN announces that the character is fun to play.